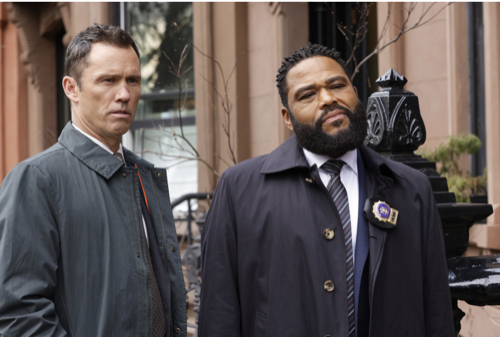 Tonight on NBC Law & Order returns with an all-new Thursday, May 19, 2022 episode and we have your Law & Order recap below. In tonight’s Law & Order season 21 episode 10 “Blue and Black,” as per the NBC synopsis, “The murder of an off-duty NYPD detective threatens to tear the city apart. Cosgrove mourns the loss of a friend and asks Capt.

Benson for help solving the case. McCoy and Price disagree on how to prosecute the culprit, sparking sharp condemnation from all sides.”

Tonight’s Law & Order season 21 episode 10 finale looks like it is going to be great and you won’t want to miss it.

Tonight’s episode begins with a woman walking down the street to the subway and a guy approaches her, gives her compliments and she tells him to get out of her way. All of a sudden, she heard gunshots, around the corner a man has been shot, she calls 911. Bernard and Cosgrove are on the scene, the victim was on the job, his name is Jimmy Doyle, and he was a detective first grade. He was working off duty and was a 23-year veteran, with multiple awards including the medal of valor.

Bernard questions the woman that found him, he tells her that he finds it hard to believe that she didn’t see anything. Cosgrove tells Bernard that he needs to talk to Jimmy’s wife. His wife, Heather, has been notified, Cosgrove and Bernard go to the house and it is really crowded with people. Cosgrove asks her if she has any idea who could do this. She says no, then she tells them that they split up about three years ago, sometimes life gets in the way that is how it is. But they were really close, they talked every day, he was her best friend. Jimmy had dinner the night before, nobody can see anything that was out of the ordinary. They speak to his girlfriend, but she says she knows nothing. They meet with a guy she dated before Jimmy and he says he had nothing to do with that shooting, he doesn’t even have a gun. But they have him on surveillance nearby at the time of the shooting. He admits that he heard the gunshots, he saw a white guy running down Broadway and he looked scared.

They check out the ex-boyfriend and he has no priors. They find the guy who was running his name is Scott Gleacher, he works in Midtown and lives in Tribeca. Looks like he was at some charity event, they have a photo of him posted there. It was with Team Girl Inc, a non-profit.

Cosgrove and Bernard head to Team Girl and he is one of the founders, just donated a million dollars, and he was the guest of honor. The rep at Team Girls says there have been a lot of rumors lately about Bleacher. They then speak to a girl, Regina Daniels, who says she hangs out with Scott sometimes. She was not at the party, she says that is for rich people. She has bruising and stitches above her eye, her sister walks in and won’t let her speak anymore and tells them to leave.

Cosgrove and Bernard meet up with Benson and tell her about Regina, she remembers her. She said she hit her head on the table, she and her boyfriend were madly in love. Bernard says they have a video of Regina’s boyfriend running away from the crime scene.

At Newman & Palmer Investments Bernard and Cosgrove meet with Gleecher and his lawyer, and tell them they have a video of him running down Broadway and they know he is dating Regina who is 19 years old. Gleecher says he knows who shot Jimmy Doyle and he is not saying another word unless he gets immunity.

Maroun is tasked with having to make the deal. Gleecher says after the charity event he went to meet with Regina, she wasn’t there, but her sister was and went crazy when she saw the cut above Regina’s eye. He told her he didn’t know anything, she pulled a gun on him and said if he ever got near his sister again she would take him down. Then out of nowhere he hears someone yell NYPD, he looks to his left and sees a guy running after them, he takes off and so does Regina’s sister, then he heard the gunshots. They interview Kendra, the sister, and she says she knows nothing. Cosgrove says they searched her place and found blood on her jacket, she is under arrest for the murder.

The DNA on her shoes and jacket matches, she did it. Jack says if she wanted to protect her sister, she should have called the police. Jack tells Maroun that she has to pay the consequences. Price agrees, but what price does she pay. Jack tells him to base his decision on the facts and the law, nothing else.

In court, bail is set at 3 million dollars. She is charged with aggravated murder and Cosgrove is furious. Price says he is doing his best with the facts and evidence he has. Cosgrove tells Pirce not to make excuses because Kendra is black.

Back in court, Gleecher is on the stand, he admits to running off that night. Kendra’s lawyer is trying to prove that Jimmy Doyle was racist and that is why he went after her and not Gleecher. Internal affairs are put on the stand there were complaints against Doyle and the judge allows them to be read. Doyle was found innocent of the charges. The two men who made the accusations, one was a rapist and the other killed a seven-year-old girl.

Doyle’s ex-wife is furious about the internal affairs cases being brought up. Regina is put on the stand, she says she loved Doyle and he was not racist, she is black. Kendra’s lawyer shows a video of Doyle sending Kendra a message on her birthday.

Kendra is on the stand, she admits she doesn’t trust the police and when Doyle was charging at her she told him nothing happened, everything is ok. He yelled at her, told her to get down on her knees, and called her a lot of racial slurs. She has seen what happens when black people comply. Her cousin complied and he has beaten to a pulp anyway. She says she tried to calm Doyle down, she was just trying to protect her little sister. She told him she had a gun in her pocket when she told him he started coming at her and he had this look in his eyes, she thought he was going to shoot her and she didn’t want to end up like George Floyd, she didn’t want to die. Cosgrove asks her if she called 911, or try to render aid, she says no, she was scared and started running.

The jury is back, Kendra is guilty in the second degree. Maroun tells Price that he tried a hell of a case. He says yes, but it doesn’t feel so good.