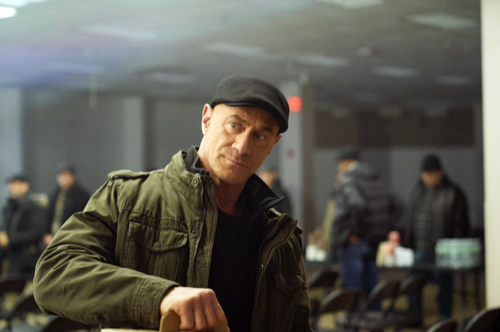 In tonight’s Law & Order Organized Crime episode, Richard Wheatley’s overconfidence wasn’t something born out of fear. He was confident because he’s been getting away with things all his life and this thing with McClane wasn’t any different. McClane tried to run. He went into hiding using drug addicts to get him food in exchange for money and one such person turned on him. They laced his food with fentanyl.

Wheatley used that drug because he made sure to carry around the antidote for the overdose he caused and McClane later woke up zip-tied to a pole. He was neighbors to Angela. Angela was also tied to a pole. Wheatley threatened to kill Angela if McClane didn’t help him. McClane being somewhat of a decent guy had caved. He agreed to do whatever Wheatley wanted if Wheatley just stopped killing people.

But Wheatley already has money. He has means of escape. He’s very methodical in that sense and so what he wanted from McClane was to have the man cause mayhem. Wheatley wanted McClane to stir up the latter’s followers. He did so. Something that Jet knew about and so the NYPD were notified to the actions and whereabouts of his followers.

They knew about the meeting. They were just unable to send people to it and so they had to wait until the followers made a mistake. They later broke into a building to steal blueprints to federal buildings. One of the men was captured. He was questioned.

The guy didn’t know much about the grand plan. He was just following a message board to go to the location if he wanted to help dismantle the system and the fool never questioned how his actions were going to be doing so. Stabler and his sergeant questioned the guy for hours.

He truly didn’t know anything and so that’s when Stabler got the bright idea to go back undercover. His sergeant was against the idea. Bell didn’t want to give Stabler another excuse to hide from his life. She thought he should stop running and finally focusing on getting on with his life. And he continued to ignore her.

Wheatley the billionaire. Everything that the followers were working to dismantle was perfectly espoused in Wheatley and Wheatley was going to get away with it. Wheatley used McClane to set up the terrorist attacks. He then left the man tied up next to a bomb while Wheatley got away with Angela.

Angela was never captured or in danger. She was just working with Wheatley to keep herself safe and together with Wheatley she set up terrorist attacks all around the city. Wheatley wanted the followers to target a power plant. And that place could detonate the city if even the smallest bomb went off there.

Stabler and Bell were able to stop the five bombs that they knew about. They even traced McClane’s signature to a location were they found him before he could die of thirst or the bomb. They also found other plans at the site. The plans was for the electrical power plant.

They questioned McClane about it once they gave him enough water to talk. He told them everything he knew. He even mentioned what his followers have been doing. The officers went to the power plant. They had the building cleared for any signs of a bomb. There was none. Wheatley had the chance to kill everyone and he didn’t take it. He instead did something far more serious.

Wheatley took the city hostage. He hacked the city. He took away their power and he was now holding it hostage in exchange for a ransom. With Wheatley, it had to be a ransom. He also wanted revenge. He wants revenge against Stabler. He wants revenge against the other people that arrested him and so now Wheatley no longer has to hide. He finally come out as the villain that he is.