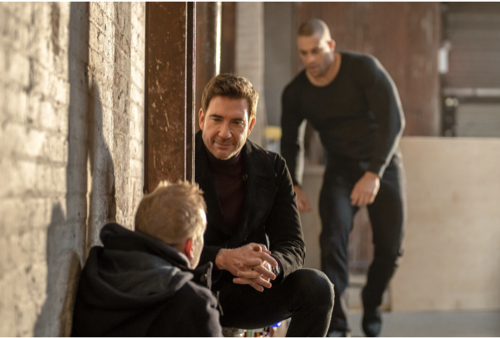 Tonight’s episode begins with Richard Wheatly taking the whole city hostage. He was in control of the power grid and he used his control to turn off the lights. The city of lights was left in the dark. The city would have done anything to turn the lights back on and that’s what Wheatly was playing into. He wanted to make demands. He first demanded a private plane. His next demand was the release of his son Richard Junior. His very last demand however wasn’t about him or his family. It was about Stabler. He wanted Stabler to pay for his transgressions and he didn’t want Stabler to lose his job. He wanted Stabler’s very soul.

Stabler made sure his family was safe during the blackout. His teenage son Eli was staying with his sister in New Jersey and Stabler had asked a neighbor to help take care of his mom. Stabler had thought he could trust Miles. Miles has been courting his mother and the elderly neighbor had seemed like a nice guy. But he wasn’t. Miles was secretly working for Wheatley and so Stabler couldn’t have asked for the worse guy to take care of his mom. He left his mother vulnerable. He just didn’t know about it until it was too late. In the meantime, Stabler was with everyone in trying to meet Wheatley’s demands.

They released Richard Junior into his father’s care because they thought the two men would be holed up together. They hadn’t known that Wheatley’s fist act upon seeing his son and namesake was to shoot him. Wheatley killed his own kid. He did it on camera too so that the police and the mayor could see him do it. While this was happening, Preston Webb helped deliver goods to the needy people in the community. He made sure to look like the good guy as everyone was panicking about the end of the world and so someone tried to please him by offering to take Joe Bartis. And Preston said it wasn’t time for that just yet.

Preston was doing everything in his power to look like the good guy. Wheatley was doing everything in his power to torture Stabler. Different adjectives but both men were great at chess. The FBI thought they could lead an assault on Wheatley’s hiding place and not only did he rebuff them. He punished them by turning off the lights at a retirement home. Wheatley didn’t care who he hurt as long as he somehow manages to upset Stabler. It’s all a game to Wheatley. A game that he was winning and so the people against him tried another way. Sergeant Bell’s team decided to use Sebastian McClane to power up an old power plant.

They were hoping to turn the lights back on. There was just one problem with the plan. The old power plant was very outdated and it had to be started up by hand and that is if it does still work after all this time in disrepair. McClane also wasn’t allowed to leave the building to turn on the power plant. He had to send Jett and Malachi in his place. The two went to Staten Island. They set up the older power plant and they were later able to turn on the lights with McClane talking them through it via their listening devices. They turned on the lights right as Wheatley was forcing Stabler to be his puppet.

Wheatley had walking around live on the camera to spout a bunch of nonsense about being a dirty cop. He had to say everything that Wheatley told him to say and he drew the line at claiming he framed an innocent man for the death of his wife. Wheatley was threatening to kill thousands if Stabler didn’t say it so that’s when the lights went on. Stabler and his team had thought they won. They thought it was over only to find out that Wheatly had grabbed Stabler’s mother. He was holding her hostage in an undisclosed area and everyone saw the footage of it at NYPD’s headquarters.

Bell sent the footage to her team. It’s a good thing she did too because Jett recognized the chair from a BDSM club and so they quickly located and rescue Stabler’s mom. They also arrested Miles while they were at it because Stabler realized Miles set his mother up. Stabler also went after Wheatley who was trying to make his escape. Wheatley was on the run with Angela. So, Stabler called Angela to tell her that Wheatley killed her son Richie. Wheatley had tried to tell Angela that Stabler was lying and she didn’t believe. She believed Stabler. She believed him so much that she got her revenge.

Angela drove the car they were in over a cliff. Her body was later found. Wheatley’s remains were never recovered and so Stabler suspects he’s still alive. He also now has to deal with an investigation because the public outcry over the things he was forced to say had put enough political pressure on his bosses that they didn’t want to be seen doing anything.

And later Stabler was approached by a mysterious man who offered to help with the said investigation.