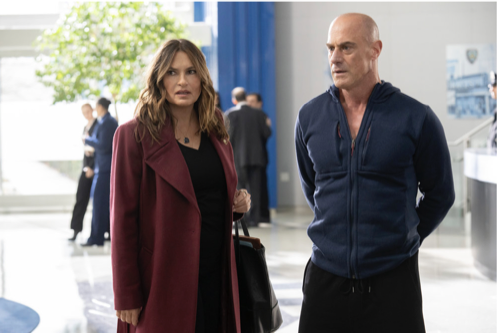 In tonight’s Law & Order Organized Crime episode Detective Elliott Stabler has been suspended. The suspension was temporary as they conduct a review into his actions in the Wheatley affair and whether or not he still deserves his badge. After he was suspended, Stabler was contacted by a man named Frank Donnelly. He was also a detective. He said that back in his day that cops stood together and he wanted to help Stabler.

He introduced Stabler to several like minded cops. They were all true blue as in they sided with cops over everything and everyone else. Donnelly runs a bar. His bar was known for being there for cops like him and he welcomed Stabler to join them at this bar. And Stabler took the offer because he suspected that Donnelly had something to do with a mobster.

Stabler pretended he bought Donnelly’s shtick. He even got upset with Sergeant Bell and they staged an argument at 1PP that was stopped by his good friend Benson. Benson was in on their ploy. She knew that Stabler was undercover again. This time he was undercover as a himself.

Stabler was going to get closer to shady cops. He was going to gather information on them and report it all back to Bell. It was so top secret that not even all of Bell’s people knew about it. They instead held a meeting about Preston Webb. Webb was doing a fundraiser for his politician friend. And he was eating up territory left by the Albanians.

Webb was even dealing with the Colombians now. He was moving up and he was taking care of any traitors in his organization. He hadn’t caught on to the undercover cop yet, but he was still posing a danger and now he was involving his wife. Cassandra Webb runs an art gallery.

She was holding Congressman Killbride’s fundraiser there. She thought they were giving back to the community and she even joined him going to a local church to help spread some good will. Unfortunately, at the church, they ran into Nova. Nova was related to the pastor and so that was news for Webb because he felt he should have known something about that.

Webb also learned about the dirty cops. He found out that there were cops stealing from drug dealers after one his places got raided and the cops walked off with over fifty thousand dollars of his money. Webb was used to dirty tricks. He’s even had a run in with cops before. But he wasn’t going to let anyone steal from him and that’s why he restructured things within his organization. Webb has decided to put his faith in Nova. He trusts Nova. He knows she can compartmentalize. He placed her in charge of the others and told them that Nova was going to be reporting directly to him.

Some of Webb’s people didn’t take it too well. They put up a fuss and Webb had to shove a knife through one of his guys’ hand to make his point, but the point was made and Webb had gotten blood on his collar. His wife noticed that blood later. They were at the hospital to meet their first grandchild and she saw the blood. She asked him about it. He told her he had put one of his men in line and she said “good”. Personally, she thought Webb should have done something about that one guy a long time ago. Cassandra it seems knows all about her husband’s business. She was those ride or die types. And so a little blood or a little violence didn’t bother her.

Cassandra supports her husband in all that he does. She later arrived at the fundraiser on his arm and she didn’t ask him about his day because she knew certain things weren’t her business. It turns out that Webb confronted Donnelly about his missing money. He demanded it back. Donnelly had agreed to it. At first, anyways. Donnelly knew what type of man Webb was and he didn’t want to cross him. He tried getting the other dirty cops to give back their share. They refused to. They also didn’t want to personally apologize to Webb. The guys thought that was a step too far. And so Stabler spoke up.

Stabler said they were in trouble either way and so they might as well keep the money. The rest of the guys agreed with him. And they were going to keep the money until Webb’s people tried to get it from them by holding them up and using their guns and intimidation. And it didn’t work because Stabler proved a better shot.