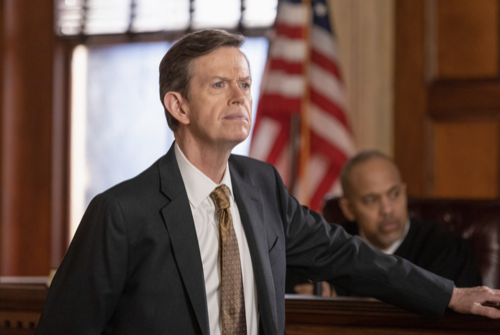 Tonight on NBC Law & Order returns with an all-new Thursday, April 7, 2022 episode and we have your Law & Order recap below. On tonight’s Law & Order season 21 episode 5 “Free Speech,” as per the NBC synopsis, “Bernard and Cosgrove investigate the murder of a congressional candidate.

ADAs Price and Maroun contend with an extremist plot hellbent on thwarting the candidate’s agenda by any means necessary.”

Tonight’s Law & Order season 21 episode 5 looks like it is going to be great and you won’t want to miss it.

Tonight’s Law & Order episode begins with Derek Hoyt’s wife, she is being interviewed by Derek’s wife by Bernard and Cosgrove following his death, he was pushed in front of a bus. She tells them that Derek got into an argument a few weeks. They were at dinner, it got really heated and this guy was calling Derek a liar and a phony, Derek pushed him away.

Next, they go see the man who argued with Derek, he says it was two alpha males arguing with each other. He says he saw Derek afterward, there was this guy following them, taking pictures, and he was wearing a Phillies hat. On surveillance, they are able to see the man who was taking the photos, his jacket reads, NYPD Fighting 19th Softball.

Cosgrove says the guy is a cop, he wants the video sent to 19th, to see if anyone recognizes him. They find their guy, he was hired to follow Derek to find some dirt, he found nothing. Bernard asks who hired him, it was Audix Media.

Bernard and Cosgrove head over to Audix Media, they meet with a man who says he heard things about Derek, so he hired the PI to look into him. He would rather not comment on the rumors and doesn’t want to disrespect the deceased.

So far, Bernard and Cosgrove are coming up empty. Computer crimes did a deep dive on the victim’s computer devices, there were some deleted emails with death threats, “you are a gutless pig,” and “you deserve to die,” were sent from a traceless app. There are also compromising photos of him with other women, or shall we say, young girls.

Bernard and Cosgrove go to see Derek’s wife see if she recognizes the girls in the photos, one of them goes to her daughter’s school.

The next stop is Stewarts’ office, he was aware, a friend called and said some photos were circulating in some right-wing chat room, he flipped out and ran over to see Derek. He wanted to beat him to the ground, but he wasn’t home, then he died. One of the girls, Kimberly Ryan, is on the same basketball team as his daughter and Derek’s daughter. They go see Kimberly’s father, he says she has never been alone with Derek, ever.

He recognizes the photo of his daughter, but that photo with Derek is photo-shopped. Looks like Derek wasn’t a pedophile, he may have been the victim of an online smear campaign. In one chat room, one guy stands out, @Warr0r_p0se who wrote, “Hoyt will never touch another young girl!” He has been posting some pretty outrageous things and he posted one an hour after the murder, “Hoyt is no longer a problem, God bless America!” They trace the IP address, it was sent from a café in Brooklyn, Café and Smile.

Bernard and Cosgrove go see Manny Lopez, Cosgrove shows him a picture of him drinking coffee at Café and Smile. They bring him down to the precinct and tell him from his chat history they can see that he wasn’t the biggest fan of Hoyt. And they have a video of him near the intersection where Hoyt was killed. Cosgrove tells him to tell his side of the story. Manny says that Hoyt is the senior member of the liberal sex crave that is destroying the country. He was planning on kidnapping a kid, he did what he had to do.

Mr. Lopez is in court, the bail is set for two million dollars.

Bernard and Cosgrove go back to Audix Media, Reed tells them to get out unless they have a warrant. They believe that Jordan Reed is an accomplice, he was communicating with Manny. They believe they were discussing Derek’s demise. Back to Manny, he admits to speaking to Reed, but he says he is a good guy. Manny’s lawyer tells him to worry about him, not Reed. Manny says that Reed said that Derek needed to be neutralized by people who could take bold and decisive action. He also said his company rewards true patriots, people who take action.

Back in court, Reed is in court, he is pleading not guilty, bail is set at one million dollars. Meanwhile, Reed has a large following who are picketing outside the courthouse, chanting “free Derek Reed.”

Back to court, in front of a jury, Price says the premise is that Reed cares about money, he monetizes venom. He made Derek the enemy of the far-right, then offered Manny a financial reward to push Derek in front of a bus. Reed’s lawyer says that Manny pushed Derek in front of a bus, Reed didn’t and should be held to blame when he didn’t do it, all he did is exercise free speech.

Price heads to the hospital, something is wrong with Manny. When he gets there, he finds out that Manny hung himself in his cell, he is dead.

In the judge’s quarters, Reed’s lawyer asks for the case to be dismissed because the key witness is dead. Price says he would still like to process murder two. Reed’s lies, posts, and photos sighted Manny to committing murder.

In court, the IP address of Audix, namely Jordan Reed’s office, is responsible for hate posts about Derek in the chat group and photoshopping the pics of Derek and the girls. But, Reed’s lawyer emphasizes the fact that they have no proof that Reed did it, even if it was from his computer.

They need to get back to work and win this case.

Back to court, a man named Mr. Pond is asked about attending a rally, and speaking to Reed and Manny. He says yes, they discussed lots of things, but not about Derek. Price wants Pond’s phone confiscated, he thinks there will be something on there.

Reed is on the witness stand he says he is a proud proponent of the first amendment, people have a right to express their views no matter if they are not popular. He says he gives patriotic Americans a forum to express their thoughts. He claims he didn’t want anyone to commit acts of violence. Price shows a video of Reed speaking to an employee, he says, “if we could just find a way to activate these morons to attack or even kill some loving liberal, we would be the number one media company in the world.” A waiter took that video at a recent rally. Reed says he was joking.

The jury reaches a verdict, Reed is guilty.