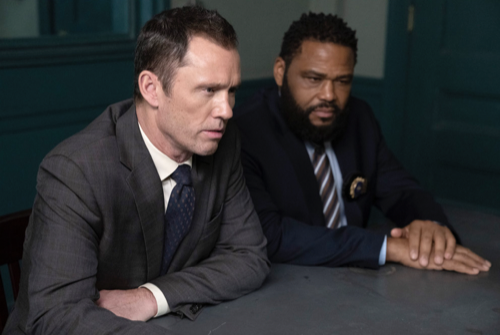 Tonight on NBC Law & Order returns with an all-new Thursday, April 28, 2022 episode and we have your Law & Order recap below. In tonight’s Law & Order season 21 episode 7 “Legacy,” as per the NBC synopsis, “Bernard and Cosgrove are confronted with a plethora of suspects in the shooting of a headmaster at an elite private school.

A teenager’s life hangs in the balance as Price and Maroun debate who’s more culpable – the shooter or the enabler.”

Tonight’s Law & Order season 21 episode 7 looks like it is going to be great and you won’t want to miss it.

Tonight’s Law & episode begins with Henry Gleason found dead in his office, at a school, a single bullet to the chest. A few people heard a loud bang last night around 10:15 pm. Looks like the killer went through the side door, there is blood on it. Cosgrove and Bernard speak to school officials and request any video footage they may have, but it was erased. Someone hacked into the system and erased it around 3:00 am. Bernard says that they found an electronic footprint, an IP address to a 14 year-old from the school.

At the home of Patrick and Dylan West, Cosgrove and Bernard show up and tell Dylan that they need to look at his computer and if he doesn’t move they are going to arrest him for obstruction of justice. In his room he is the girls lacrosse trophy and Mr. Gleason’s nameplate. Dylan says he stole the stuff, it was a dare on social media. He did erase the video, he didn’t want to be caught stealing the stuff. He shows them the video he posted on social media proving what he said.

His father, Patrick, says a lot of people didn’t like Mr. Gleason, he was trying to shove the progressive woke stuff down everyone’s throat. Some parents went ballistic, he saw a woman getting angry and saying if she had a gun she would shoot him in the face. Next, they meet with Liz Wayland, she is the one that threatened to shoot him. She says she just heard about this scam, kids getting diagnosed with learning disabilities so they can get extra time for SATs.

She asked Gleason about it and tried to convince her that 47 kids really had these disabilities. She was pissed off, but she never killed him and doesn’t own a gun. She mentions George Pratt, his son Ethan was recently expelled for violating the school’s anti-racism policy. There were four boys, they were all expelled, Pratt was fighting it to get his son off. Pratt has been married and divorced three times, and owns three firearms.

They call in Pratt who admits he hated Gleason. He was at the school when he was killed, he was at a play to see his daughter perform. He says he was outside with another parent, waiting for their kids. The story checks out. They have some video footage from a camera across the school. They see someone running down a lane, it is a boy named Cooper, turns out a jacket in his bedroom has blood on it, the same blood Type as Gleason. Cooper tries to talk but his mother tells him to shut up and she asks for a lawyer.

The kid is dying to tell them what he knows, but his mother won’t let him talk. They head to the school and find a note in Cooper’s pocket, that tells him to meet him after the play and there is a drawing with someone holding a gun. Cooper’s lawyer lets him talk, he says Bennet Richardson put that note and drawing in his pocket. They got into a fight the other day, Cooper kicked his ass and Bennett wanted a rematch. He didn’t think he would have a gun, he thought he was flexing.

He walked into the classroom, Bennett pulled out the gun, Cooper freaked and Bennett said he was going to kill me. His exact words were “I am going to shoot you in the chest and watch you die.” Cooper tackled him to get the gun and in doing so the gun went off when Gleason walked into the classroom and got shot. Bennett took off. Cooper tried to help Gleason but he was hurt really bad.

The next stop is Bennet’s home and they have a search warrant. They find a gun, and drawings of the shooting. They arrest Bennett on the spot for the murder.

Bennett had a teacher who told Gleason and his parents that he was concerned about his drawings, he stabbed the teacher in the wrist with a box cutter, he said it slipped. Bennett’s father gave the teacher $100k to keep quiet.

Bennett got a hold of pills from his parent’s medicine cabinet and tried to kill himself, he is in the hospital. Bennett’s lawyer tells Price that he is not fit to stand trial and is going to get a competency evaluation. During the evaluation, Bennett says he didn’t want anyone to die. He says his father told him to fight back and if he didn’t nothing would have happened. His father told him to grow up, be a man, and stand up for himself. He brought the gun to school because he thought his father would want him to. The gun was passed down through his family, his father gave it to him on his seventeenth birthday.

Price tells McCoy about Bennett’s father giving him the gun and the ammo, he wants to charge him for the murder as well. McCoy says it’s a long shot.

Bennett will not testify against his father, he won’t rat him out. His lawyer says that if he wants Bennett’s help, they have to give him immunity. Price really feels like he can win the case.

Price tells Bennett that he will get immunity, but he has to testify against his father. If he lies, he will be thrown in jail.

In court, Bennett is on the stand and says what his father said about fighting back. He freezes on the stand and leaves the courtroom. Price then meets with his mother and tells her that someone has to pay for Gleason’s murder, her son or her husband. She says she can’t choose, then thinks about it, and decides to go on the stand.

On the stand, Bennett’s mother says her husband didn’t believe in therapy, he put him into sports to defend himself and she knows he gave the gun to Bennett because he liked it.

Bennett’s father is guilty, handcuffed, and brought to jail. Bennett gets off.