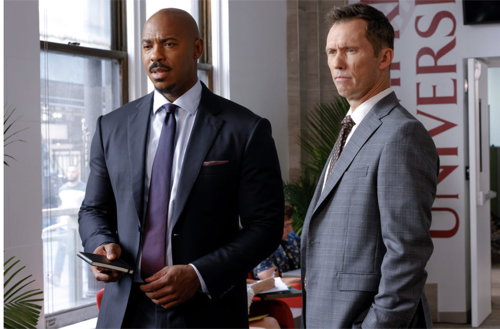 Tonight on NBC Law & Order returns with an all-new Thursday, September 29, 2022 episode and we have your Law & Order recap below. In tonight’s Law & Order season 22 episode 2 “Battle Lines,” as per the NBC synopsis, “A politician’s daughter is found dead after an alleged mugging.”

Tonight’s Law & Order season 22 episode 2 looks like it is going to be great and you won’t want to miss it.

In tonight’s Law & Order episode, a teenage girl wandered around Central Park for a while before she was eventually found. Sadly, she was later found dead. She had been murdered. Detective Cosgrove and his new partner Detective Shaw caught the case. They questioned people inside the park. They asked them if they saw anything and a couple of them came forward. There were at least two witnesses that described a white man pushing the girl off a bridge. But why did a beat cop pull over to question a black guy? Shaw who was black himself had seen right through the best cop’s attempts at stop and frisk. He took him to the task. He was still berating him when an actual suspect was spotted running through the park.

That guy was at least white. He also had the victim’s bag on him. They caught that guy and the witnesses said that he wasn’t the right guy. They questioned the guy to see why he was running. He said he found the purse lying on the ground and he picked it up. He was afraid of getting caught for theft. But with the wallet missing, they couldn’t identify the victim. They had to identify her using her t-shirt. It was a shirt that had a small town on it. The town lead back to Austin, Texas where the girl was identified. Her name is Becca Carter. She was reportedly visiting a college to consider it. And she had promised that she wouldn’t travel around the city alone.

It turns out Becca was the late daughter of Governor Carter. He was the governor of Texas. He was making a name for himself on the national stage by badmouthing NYC and claiming that it was so dangerous because “woke liberals” were ruining the city. Naturally, the governor made a big deal out of his daughter’s death. He didn’t go running to ask the police what they knew. He instead held a press conference the moment he landed in the city. He claimed he asked the Justice Department to step in on the case. He said the cops in NYC had no leads. Which wasn’t true. They did have a lead. It just wasn’t a man.

Becca hadn’t come to NYC to visit the college she told her parents she was set on attending. She barely spent time on campus or doing the student events and her roommate there thought she was partying. The roommate mentioned that Becca was also meeting up with people. She named a restaurant that the detectives looked into. They got security footage of Becca meeting with a woman. The woman had been one of the witnesses to Becca’s murder. Her name was Drea Clark. She had given the cops bogus information when she gave her witness statement earlier. She might also have lied about what really happened.

The other witness only ever saw a white man running away. It was just Drea who claimed to have witnessed Becca’s murder and so the police went looking for Drea. They considered her a suspect in Becca’s murder. They later found her about to board a bus back out of the city. They brought her in for questioning and that’s when she finally began telling them the truth. Becca came to NYC to have an abortion. It was illegal in Texas. Her father ran on an anti-abortion platform. But Becca was young. She didn’t want to throw the rest of her life away on having a kid at seventeen and so she met with someone in Texas who could help.

She met with Drea. Drea basically held her hand while she got Becca through the process and Becca was supposed to meet her in the park so that Drea could walk with her to the clinic for her follow-up appointment. But then Drea saw a white man throw Becca off that bridge. That was the truth. She witnessed the murder. She didn’t recognize the person nor had she ever met Becca’s boyfriend or anyone else in her family. The police held onto Drea while they questioned the boyfriend. He flew up with Becca’s parents. He knew the real reason why Becca had an abortion. It had been his idea because he wasn’t ready to become a dad.

There were flight records proving that he flew up after the murder. He was on the same flight as Becca’s parents. The only person who wasn’t included with the family on that trip was Becca’s brother. The brother flew to NYC a day before the murder. It turns out the brother matches the description of the killer. He was arrested. His cell phone was searched. He killed his sister because his mother found out she was pregnant by spying on Becca’s period calendar and asked him to stop the abortion. Once he later realized he was too late to stop it, he became so angry with his sister that he murdered her.

The cops arrested Blake Carter. His parents got him a lawyer. They claimed it was a witch hunt in the conservative media and unfortunately the prosecution lost their best witness. Drea didn’t want to testify. She had helped arrange Becca’s abortion. She transported an underage girl across state lines. She was afraid of charges and so she backed out of testifying. The prosecution tried to make their case without her, but Blake was claiming it was in fact Drea who murdered his sister and that he was just an innocent bystander. He claimed Drea forced his sister to have an abortion. That Becca had changed her mind and she tried to back out and Drea forced her to go through with it.

Never mind that Blake’s loving sister never confided in him before her abortion. She never responded to any of his calls and he had to use a tracker on her phone to hunt her down in the city. Blake’s statements don’t even make sense. He never told his parents about supposedly witnessing his sister’s murder. He only said so while he was on the stand. The last thing his mother was told was that he couldn’t wait to kill her. And so the ADAs talked to Drea again, they convinced her to take the stand in spite of the cost.

It was Drea’s testimony that sealed the day. The jury found Blake guilty and Drea was walking out of the courtroom when a supposed pro-lifer shot and killed her.