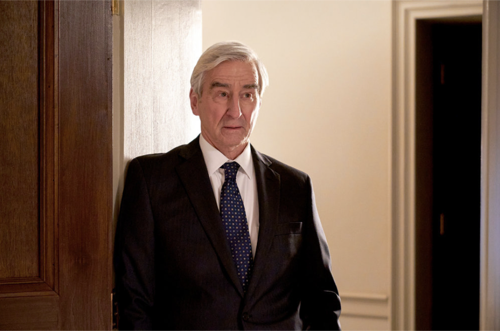 Tonight on NBC Law & Order returns with an all-new Thursday, February 24, 2022 episode and we have your Law & Order recap below. On tonight’s Law & Order season 21 episode 1 “The Right Thing,” as per the NBC synopsis, “Newly acquainted partners, Bernard and Cosgrove, investigate the murder of a notorious entertainer. A dispute over throwing out a confession creates a rift in the DA’s office.”

Tonight’s Law & Order episode begins with Henry King on TV saying that he did not have non-consensual sex with anyone and the next thing you know, he is dead on the sidewalk with five gunshot wounds. Kevin is on the scene and says every victim deserves respect, even the ones that rape forty women.

Henry’s wife says that he was trying to reclaim his life, his dignity. Frank and Kevin are there to ask her questions – Frank asks her where she was between 9 and 11. She says she had dinner with friends. Kevin wants to see the video surviellence and she says they haven’t turned it on in years. Frank is surprised, he says her husband is the most hated man in America. Since her husband was released from prison, she says nothing unusual has happened and the women who claimed he raped them, nothing from their either.

There was a text on King’s phone two days ago, “its over, I’m coming for you.” At Allied Talent, King’s agent sent the text. He stood by Henry year after year despite the allegations and he fires him three days ago just when they are about to close a fifty million dollar deal with a podcast company. King was trying to screw him out of his commission. King owed everyone money and he told his agent that some gang banger was shaking him down.

Next stop, is the streets to find the Shabaz, who was shaking King down. Frank walks up to a black guy on the street is a little aggressive and an argument stars, Kevin calms it down and tells Frank to walk away. There are other people around and they have their cell phones out, Frank makes a comment about the damn cell phones and Kevin tells him there is another way of looking at it, they make them accountable.

They find Shabaz and he says everyong in jail wanted to go after King, so his crew, for a fee, kept him alive. Once King got sprung, he didn’t want to pay. He talked to King who laughed at him. Kevin asks him where he was last night, Shabaz has an alibi. Frank tells him that King is dead, he won’t be getting his money unless Frank wrote him in his will.

Kevin finds some video footage of Frank outside the day before, he is arguing with a women, a prosecutor named Jamie Ross. Kevin and Frank head over there and she says that Frank has been harassing her. She is the reason King went to prison, and the reason why he was released. King has a PI investigating her life, he said he was going to destroy her life and her family. Frank asks if she killed King and she tells him to get the hell out of her office.

Veronica, King’s wife, lied about what time she left the restaurant the night of his death. Upon further investigation, Veronica says she went to a bar after the restaurant because she couldn’t deal with going home to Frank. She did notice something though, a man with a green hoodie and sun glasses hanging around.

Even though it was dark, it felt odd. And, if she wanted to kill Frank, she would have killed the bastard herself. The bartender collaborates her story and there is surveillance showing a guy in a green hoodie smoking a cigarette. Frank and Kevin head to location where the guy was standing, and a cigarette but was left. They bring it to the lab and they have a hit, the DNA belongs to Nicole Atkins, she was the first woman to accuse King of rape.

Kevin, Frank and the team get a search warrant and go to Nicole’s house, she is not there but her husband is shocked that they are there. Frank goes to the dryer and sees a green hoodie in the dryer, later they find no blood on it but she was there. They have another hit, with Nicole close to King’s house 30 minutes before the shooting. And, a gun was found, the casings would match those that were used to kill King. Nicole is brought in for questioning.

Frank tells her that they have her on video, there were two surveillance videos – they know what she did. Frank tells her to tell her side of the story, what happened, and she will go home, he gives her his word. Nicole says in the tv interview he had no remorse, he had to be stopped, so she shot him. She tossed the gun in a dumpster and went home. Took a shower, said some prayers and made her piece. Frank goes over to her, says he lied, puts handcuffs on her and arrests her.

Supreme court, Nathan is trying the case and says when the justice system failed her, she took matters into her own hands. She had every right to loath him, she shot him five times. Unfortunately, the horrible acts that King did to her, has no bearing in this trial. She murdered him.

King’s wife changes her testimony. She says she was in the house and she saw him arguing with Nicole before she shot him. Nicole is next on the witness stand, she says King was charming in the beginning until they played tennis one day and he started flirting with her. He wanted to have sex with her and when she said no, all the kindness left his eyes, he pushed her down on the bed and raped her.

She wanted to pretend it never happened. They remained friends after he raped her. The next time she saw him, he drugged her and he raped her again, she was only 24. The night of King’s death, he invited her there to apologize, she took the gun just in case he tried to rape her again. When things got aggressive and she was afraid for her life, she shot him. Nolan makes Odelya do the closing argument, she shares that her sister was raped with the jury as part of her speech.

In the end, the jury reaches a verdict, the defendant is guilty. All the other victims are in the courthouse and they start shouting “let her go.”