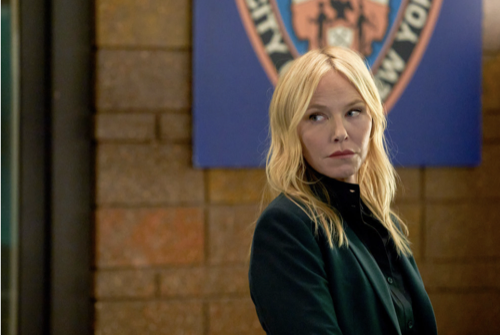 Tonight on NBC Law & Order SVU returns with an all-new Thursday, January 20, 2022 episode and we have your Law & Order SVU recap below. On tonight’s Law & Order SVU season 23 episode 12 “Tommy Baker’s Hardest Fight,” as per the NBC synopsis, “When a popular fighter doesn’t show up for the biggest bout of the year, Rollins and Velasco are drawn into a complicated web of secrets. McGrath confides in Benson.”

Tonight’s Law & Order SVU season 23 episode 12 looks like it is going to be great and you won’t want to miss it.

In tonight’s Law & Order SVU episode, a prized MMA fighter began acting out. Tommy Baker didn’t like to be touched. He was temperamental. He openly bragged about killing his opponent in the ring in an upcoming fight and that was unlike him. The Georgian native was usually mild mannered. Sure, he was a fighter. He just was never aggressive out of the ring and so even the MC asked if Tommy was okay.

His physical therapist said everything was fine. The media wasn’t told about anything new and later something happened. Tommy was attacked. He was attacked out of the ring. He was beaten up, tied up, and it looks like he was also sexually assaulted. Some trucker found him. He called the police and the police’s first concern was pulling up his pants because they didn’t want a champion to go out like that.

But Tommy wasn’t dead. The beat cops’ first should have checked to see if he was dead before they began destroying evidence and so they only realized he was still alive when he moaned for help. Tommy was rushed to the hospital. The beat cops called SUV because it looks sexual assault and the doctors later confirmed it. Tommy suffered severe tearing. He was fighting for his life when unfortunately it got out that his cell phone was set on the Grindr app and that was an app for gay men hooking up solely to hook up. It wasn’t about relationships. Tommy wasn’t interested and his wife could say as much.

His wife Chrissy said that Tommy would never use Grindr. He was gay. He planned on coming out after he won the fight and he was also in a committed relationship with another man for the past year. He had no need to use Grindr. Captain Benson and her team spoke with Tommy’s boyfriend. He said that everything was good between them. He started out as Tommy’s physical therapist and the two grew close. Tommy came out as gay. Something he had hidden up until then from everyone besides his wife because he comes from a small town in Georgia and his family was religious. Benson and her team looked into the Grindr thing.

It was created literally that night. Someone wanted it to look like a date gone wrong because they hadn’t wanted Tommy to get in the ring or to come out as gay. Tommy was set to win the match. He was in the best shape of his life. He came back from a brutal injury last season and that’s how he met the physical therapist. Tommy’s cell phone being set on Grindr was a set up. Someone wanted to use the fact he was gay against him and the chief suspect was Jax Bell. Bell was in charge of the fight. He invested a lot of money into Tommy and he was overheard fighting with Tommy in the lead up to the attack.

The team brought in Bell. They questioned him. They asked about the fight and he said it wasn’t what they thought. He wasn’t angry about Tommy being gay. He had actually come up with a multimillion dollar scheme to sell “Rainbow Warrior” and so Tommy being gay would have made him a lot of money, but he fought with Tommy because Tommy wanted to back out of the announcement. Tommy had talked to his dad. His dad wasn’t ready to have an openly gay son. He didn’t want Tommy to go ahead with the announcement and that meant Tommy wasn’t going to say anything about his sexual orientation. Or maybe he changed his mind again.

There’s no telling what Tommy planned to do. He was unfortunately in a coma so they couldn’t ask him and so they spoke to his father. Duke was a fighter in his own day. He was also a messy drunk who was known to get into fights at bars and his trip to NYC was a surprise to Tommy. Detective Rollins spoke to Duke. Duke was asked about his son and he came across as honest. He said he was dying. He has pancreatic cancer. He has perhaps two months left to live and that’s why he came to NYC. Duke was hoping to tell his son. He also wanted to see him fight one last time before he goes and now he doesn’t know if he’ll ever be able to tell his son how proud he is of him. He even came to terms with his son being gay.

Duke was rough on his son when Tommy was younger. He kept trying to “make a man out of him” by pushing him into fighting and now he just wants to make peace with his son. To love his son no matter what he is. Tommy changing his mind about coming out was probably just a fear-based response of his dad being there when that announcement came. Duke did mention that Tommy had gotten a call from his money man when they were talking and he seemed upset. The detectives talked with the money man. They found out that Tommy’s information was used to rent a Porsche. Now, Tommy doesn’t drive a luxury car. He still drives his old pickup. And so that just left the wife Chrissy.

The team spoke with Chrissy again. They asked her why another fighter by the name of Ricky Nowak was using a Porsche rented in Tommy’s name and she said she gave Ricky the car. Chrissy and Ricky were seeing each other. Chrissy told Tommy about it and he hadn’t approved. He thought Ricky was a “loser”. Chrissy told the cops that she didn’t bring up how she was still seeing Ricky in order to not upset Tommy and that Ricky could have any girl he wanted. She needed something to keep him around. She gave him all the money he could ask. She gave him full access to the credit cards and he had life made.

Ricky was later picked up trying to leave town. He swore his innocence and he said he knows who was setting him up. He knows it was Phil. Phil the physical therapist. Phil, Tommy’s boyfriend. Ricky had apparently been sharing the money he got with Phil. Tommy found out about it and he demanded that they return everything. Phil was willing to do it. Ricky was not. Ricky hates gay people and he was the on to assault Tommy. Phil had just witnessed the fight. Not the after. Phill was taking the money because he found out that Tommy was never going to leave Chrissy. Even once he came out.

Chrissy was Tommy’s family. Tommy later came out of his coma and he returned to Georgia to be with his dying father. But he wasn’t silent. Tommy came out as gay. He said he was married to his best friend and that he was also a sexual assault survivor.

And Benson tried to help McGrath with his home life, but he wasn’t ready to hear it.