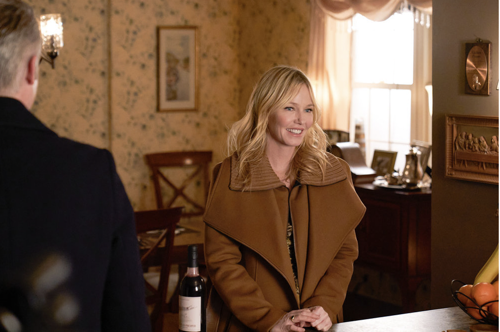 Tonight’s Law & Order SVU season 23 episode 15 looks like it is going to be great and you won’t want to miss it.

In tonight’s Law & Order SVU episode, Carisi and Rollins drive by St. Paul’s church where he was an altar boy when he was young. They arrive at his mother’s house. They go inside, his mother is there, and also his niece who is happy to see them. They sit down for dinner and Rollins gets to know her mother. Carisi asks Nia about being in the dorm, she says she is a sexual assault advocate. While she is there, two of her friends are out at a secret leading university for a dinner party.

Carisi and Rollins are home, his dad calls and he tells her that his mom liked Rollins. Nia calls Carisi, she needs his help. He tells her to take her to emergency and he hangs up with his dad. One of the girls in the dorm was raped, Carisi is heading out, Rollins goes with him.

Benson is also at emergency, Annabelle is getting a rape kit but she showered before she told Nia about what happened. Annabelle wasn’t on birth control either, so they are going to give her something. She tells Rollins and Benson that she feels stupid, she was pretty drunk. She tells them that she was at a formal dinner, she couldn’t find her purse and a guy told her that she left it on the bus.

Another guy said maybe it was upstairs, he insisted on giving her a piggy back ride, his name was Austin. When they got there, she was looking for her purse. When she woke up, Austin was on top of her, inside of her, and two other guys were holding her down. She remembers Austin calling the two guys tweedle dee and tweedled dum.

At Annebelle’s dorm room, her roommate Sarah, who was also at the party is there and is questioned by Rollin and Fin. Sarah says she feels bad that she didn’t protect anybody. She thinks Annabelle go up with Austin, she left early to meet with her boyfriend. She says the two guys were Jacob and Brad. She didn’t get past the front room, the guys could tell she was not waisted enough.

The Bishop Club, Whittaker Yates answers the door to Fin and Rollins who says there is a sexual assault charge. Rollins says she needs to look around, he says that is no possible. Fin applies some pressure and they get in. Rollins says they are going to have to speak to every member who lives there, especially Austin, Jacob and Brad. Austin claims that he said goodbye to Annabelle when she left.

They all of course deny everything, it is three against one. The boys parents arrive at the station, they leave with them but Benson advises that nobody leave town. Carisi thinks this is a coordinated event. Fin says that if this was a group of boys in the projects, they would have been locked up.

Fin and Carisi interview the waiters and tell them a girl was sexually assaulted. Rollins tells him that the place could lose their liquer licence and he will do his job. He says they are paid very well to just keep pouring the wine. Next, they interview the bus driver. Leaving the purse in the bus is a prank. They then interview Oscar who has worked at the club for thirty years, he saw Annabelle going up the stairs. He says they order special liquer so the girls are like ragdolls.

Det. Parlato-Goldstein attended the club when he was younger, they call him in the station. He says the boom boom room is where they took Annabelle. He suggests they get them to incriminate themselves.

Det. Parlato-Goldstein goes undercover, he brings burgers to the club and goes to visit the boys. He has a camera on and the team is watching. He goes up to the boom boom room and sits on the throne, the boys are thrilled to have him there. They have a new pledge song, a remix, They sing a song about when they have a club night, they turn bitches into hoes. Take their things, get them on their knees begging please. Carisi has seen enough he is going to charge the whole Bishop club with rape one.

Benson meets with the club President Rosa Freeman and tells her that have arrest warrants for every single student. They are executing a search warrant and it is happening now. They all get arrested and they conphiscate the cell phones. Nia is outside watching. Fin reads them their rights and the boys are all sarcastic and say they have money, the will get out of this.
Chief McGrath finds out about the club is arrested. Benson says she was giving him possible deniability. She says it is a conspiracy, not just the three they are charging with rape one. He says pick the cases she can make, they are not here to make political statements.

Carisi is in court, judge Colin McNamara asks him if they get a group discount, sixteen defendants. All the boys plead not guilty.

Carisi calls Rollins, Nia’s group organized a march and they were attacked. Benson and Fin arrive, the Bishop boys are there, but they say the protestors initiated contact. They also put Nia’s face on a blowup doll. The Bishop guys stayed on their property the whole time.

Det. Parlato-Goldstein shares the idea of charging rape in this case as a hate crime. Carisi says, “that’s just something the DA’s office doesn’t do.” Benson believes a harsh message does have to be sent to them.

Fin tells McGrath they want to attach a hate crime, that the boys have bias over the women. McGrath is on board.

The cell phones that were taken, the boys were texting pictures to each other of Amanda in her underwear with whore and slut on her. They show the photos to Annabelle, she says she didn’t even look in the mirror, she just scrubbed it off. Benson tells her that they want to charge them with a hate crime, for hating women.

In court, Carisi tells judge Elana Barth that they want to charge a hate crime to the three boys involved. Carisi says this is no different had the attack had been against black people or Jewish people.

One of the boys, Daniel Hoffman comes forward, his father does not want him charged with a hate crime, he is willing to testify against his club brothers. Daniel is upset when he meets in front of Carisi and Benson. He tells them that Austin gave Annabelle a piggyback ride upstairs to the boom boom room, with a couple of other freshman boys, they all got to watch. Daniel held her arms while Brad wrote on her breasts and held her legs while Austin raped her. He says he didn’t rape her. Benson says maybe not, but he helped them and will have to live with that the rest of his life.

Brad refuses to turn against his brothers – but his lawyer gets him to change his mind. Austin is next, Det. Parlato-Goldstein tells him they have DNA on Annabelle’s underwear which implicates him. Austin replies that his father said they should never have let jews in the club and his lawyer tells him to stop. Carisi tells him to keep going, he will put hate crimes back on the table.

The club gets permanently shut down. Nia thanks SVU for that, she says it is means a lot to all of them to be heard.