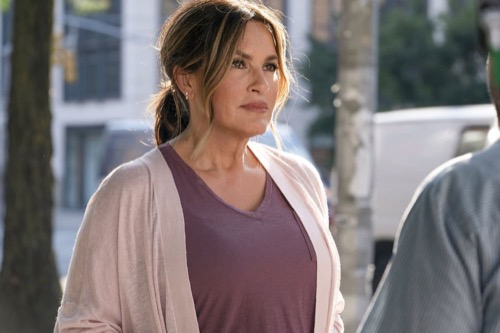 Tonight on NBC Law & Order SVU returns with an all-new Thursday, April 14, 2022 episode and we have your Law & Order SVU recap below. In tonight’s Law & Order SVU season 23 episode 18 “Eighteen Wheels A Predator,” as per the NBC synopsis, “Rollins and Fin investigate an assault in Kentucky that has striking similarities to victim found in Central Park. Benson receives intel that turns the case upside down.”

Tonight’s Law & Order SVU season 23 episode 18 looks like it is going to be great and you won’t want to miss it.

A woman went to the bar. Her boyfriend didn’t like bars. He also broke up with her earlier that day and so she went to a bar to forget him. She had a few drinks there. She flirted with the bartender. She also dumped the bartender once he got aggressive with her. She went walking alone and in the park. She got grabbed from behind. The man raped her. He left her for dead. But he left behind her purse and he even folded up her jeans to leave them beside her. This poor woman was found the next morning. She was thankfully still alive although she didn’t know where she was or her head wound left her with a nasty concussion. She was so confused that she called Captain Benson “mom”.

The unknown woman was rushed to the hospital. The police continued investigating the scene with the newly returned Detective Rollins and Benson was dealing with her boss. Her boss wanted a quick close to the case. He said that the media were going to go wild with the story about how dangerous the city has gotten and Benson had to reply how that wasn’t her problem. They were still investigating. They just couldn’t rush through a case to get the bad guy. They also had to build a case. It was helped when the victim finally came to the hospital. She identified herself. She said her name is Kayla.

Kayla freely admitted she was drunk that night. The detectives asked about it because there had only been one charge for one drink and so she told them all about the bartender. The police went to the bar. They later spotted the bartender, whose name is Dustin, making a drug deal. They searched him. They found several bags of cocaine on him. So, the police arrested him. They asked him about Kayla and he called her a stuck-up b*tch. He refused to say anything else without a lawyer. The police got a warrant for Dustin’s apartment and they later found Kayla’s wallet hidden under Dustin’s bed. It was the only thing missing from the scene.

They also got a match for the DNA in Kayla’s mouth. Kayla had kissed him at the bar. To be honest, he kissed her. She danced away. The police just hadn’t known about it when they started their victory lap and so it’s a good thing the real rapist called them. The real rapist had wanted credit for the rape. He didn’t want Dustin to take the fall for it. He called Benson right before she planned on joining the chief at a press hearing and he told her that he committed the rape. He even offered up evidence by revealing he folded up the jeans beside Kayla. The police hadn’t put that tidbit in the media and so the caller was their guy.

The Chief later had TARU trace the call. They proved that it came from Kentucky. Benson made some calls down there and she came across a local police department that was investigating a rape. This new victim had her pants folded up beside her when she was found. The rapists had hit again and so Benson sent two of her detectives down south to get as much information as possible. It turns out that the state police were tied up with a school shooting. They therefore couldn’t investigate the rape in Kentucky and so the local police got to stay on. And they tested the DNA that the rapist chose to leave on the victim.

There wasn’t any DNA on Kayla’s body because the rapist had used a condom. He also picked a night when it was raining and all DNA washed away. That wasn’t the case in Kentucky. The rapist was in fact a serial rapist with a profile going back twenty years and so he couldn’t be Dustin. Dustin would have been seven at the first rape. But with this rapist being a cross-country serial rapist, the FBI got involved. All the other boroughs sent their SVU detectives to help with the investigation. Benson finally got the budget for overtime. Everyone was finally on the right page that this man had to be stopped and they believed they knew how he got away with it all these years.

The rapist was using the interstate. He was either a trucker or someone who frequently travels along the interstate and so Benson and her team checked the security cameras from the bar that Dustin owns. They found a guy with a trucker hat. They later spotted that same guy waiting outside of the bar for Kayla. The trucker hat said Walker’s Trucking. The cops checked with the company and they had hundreds of men working that route and were in those places. Benson then got a great idea. She realized they were only checking committed rapes. What about attempted rapes? They found a victim who actually saw this guy’s face and who was ignored by police when she reported her attempted assault.

They hadn’t even run a rape kit on her when she knew everything. She knew this man’s face, she knew what his wife sounded like on the phone, and she knew that he got yelled at by said wife for failing to show up at his own birthday party. And from there, they found Wes. Wes was promptly arrested and later so was Dustin. Besides the drug dealing, Dustin was also raping his sister and it was the sister who planted Kayla’s wallet under his bed. And so that solved any other questions the cops might have had.