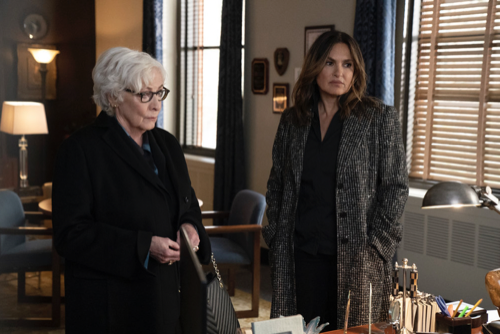 Tonight on NBC Law & Order SVU returns with an all-new Thursday, April 28, 2022 episode and we have your Law & Order SVU recap below. In tonight’s Law & Order SVU season 23 episode 19 “Tangled Strands Of Justice,” as per the NBC synopsis, “Garland asks Benson to reopen a missing person case he worked as a rookie officer. A victim in one of Carisi’s recent cases is arrested.”

Tonight’s Law & Order SVU season 23 episode 18 looks like it is going to be great and you won’t want to miss it.

Tonight’s Law & Order SVU episode begins with a missing girl for fourteen hours, Aretha Green, and cops are spreading out to look for her in a wooded field. The chief gets the call to go to the World Trade Center, they are getting reports that a Cessna hit the north tower.

Present-day, a kid was fishing in a body of water in Central Park and found some human remains inside a duffel bag.

Elsewhere a man is sleeping and the woman he spent the night with, Kendal, got up early and stole $850k worth of watches before he woke up. He met her on a website called Sugar-Babies. He says she goes to NYU, but she is not registered there.

At the major case squad room, they found Kendal and the watches.

Benson meets with Garland at a café, he wants to reopen the case of Aretha Green from twenty years ago. They were doing a grid search when they were called to the World Trade Center and didn’t complete it. Rollins and Velasco are put on the lead for this case.

They go meet with the chief who was in charge of the grid search. He says the girl was a nerdy type, she went out on her scooter and never came back. Her mother called him every day for months, he had no leads and he was pulling bodies out of the rubble for a long time, unfortunately, a lot of cases didn’t get worked on at that time. Velasco tells him about the body they found, they think it is Aretha.

Kendal’s case is brought to Carisi and he is wondering how they found her so fast. They claim to have had her DNA and he is wondering where it came from, little does he know that they took it from her toothbrush at the apartment where she stole the watches.

The coroner is examining the remains found in the lake, the victim was pregnant, and there are also fetal bones.

Rollins and Garland go see her parents, and they identify a watch they found in the duffel bag. She says that her daughter was depressed weeks before she vanished. She still has her baby teeth, she gives them to Rollins so they can do a DNA match to confirm it is her body.

Benson and Carisi speak to Kendal and try to narrow down where they got the DNA, she says she never gave it to them. Benson goes to speak to the arresting officer and asks how they were able to bring her in, she used a fake name and fake address. The officer won’t answer, she won’t give in.

The body is identified, it is Aretha Green and they were able to pull DNA from the baby, it was a boy and the father was African American.

Rollins and Garland go speak to Aretha’s mother, Cora, she wants her daughter’s remains so she can bury her. Then they tell her that Aretha was pregnant, her mother says it wasn’t true, she was a baby herself. Garland says that whoever got Aretha pregnant could also be responsible for her death.

Benson goes to the lab and wants to find out why a rape victim’s profile was accessed in a criminal investigation. The man they speak to says it came down from the major case. They had DNA and he decided to run it against the rape kits, he did it without speaking to his supervisor. Benson says it is totally unethical.

Cora goes into the station to speak to Rollins and Garland, she says that Aretha was always about her studies, she was a good girl. They interview Cora’s father, he says he was always with Aretha. If he left the house, it was only when Red was there, he was Cora’s boyfriend. Cora says Red was married, that is why she didn’t say anything, their affair already caused his family enough pain.

Benson finds out that there were six breaches in the system and they were all made by the same forensic biologist, Harry Kent, and all at the request of detective Zabo. Kendall was raped and that is how they matched the DNA, from the rape kit.

Rollins and Velasco meet with Red, he says he had a workplace romance with Cora. He says he spent time with Aretha times alone when her mother had to work. They ask him for his DNA, and he says ok, but he doesn’t want his wife and kids to find out about it. He tells them to give their regards to Cora and Nina, Aretha’s little sister.

Detective Zabo comes in to see Benson and blasts her. In turn, Benson tells her off and tells her not to trade sexual favors to get DNA on rape victims. Then, Benson throws her out of her office.

Red tells Rollins and Garland that is none of anyone’s business that she had a younger daughter. Nina never got over her sister, she is on the streets and on drugs. Cora told her not to come back, she didn’t want to see another daughter die, in fact, she always thought they would find her body before Aretha’s body.

Velasco finds out that Nina is living in a halfway house, he heads there to see her with Rollins but she is not there. An official from the halfway house says that Nina’s grandfather visited her earlier in the day and after that she was very upset and left.

Velasco and Rollins are out looking for Nina, they find her and bring her in. Nina knew that her sister was pregnant, she didn’t want her mother to know, her grandfather said it would kill her. They bring the grandfather in, he says his girlfriend said she was pregnant with Cora, he didn’t believe that she belonged to him but he treated her like his daughter. When Aretha told him she was pregnant, he didn’t want her to tell Cora, he got angry, shook her, she fell against the tub, and hit her head. He never meant to kill her, he loved her. She was not his grandchild, so it wasn’t sin against God.

Looks like Kendal is going to get off, and the DA is making a statement. They and detective Zabo take credit for taking down the corruption of using the rape victim’s DNA kits. Cora finds out that her father, who really wasn’t her father, was the father of Aretha’s baby.