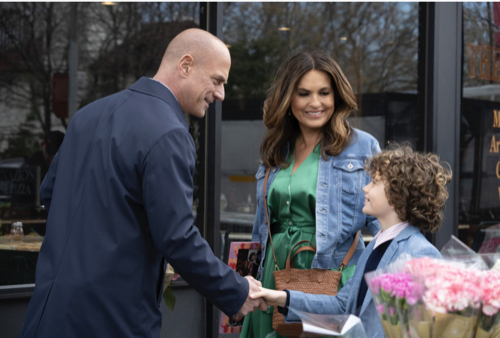 Tonight on NBC Law & Order SVU returns with an all-new Thursday, May 5, 2022 episode and we have your Law & Order SVU recap below. In tonight’s Law & Order SVU season 23 episode 20 “Did You Believe In Miracles?,” as per the NBC synopsis, “When a student’s school reports a girl missing, the squad must track down a trusted family friend for answers. Benson gets a Mother’s Day surprise.”

Tonight’s Law & Order SVU season 23 episode 20 looks like it is going to be great and you won’t want to miss it.

In tonight’s Law & Order SVU episode it begins with Olivia sitting with her son at a café looking a video of him when he was younger. He tells her that he has a surprise for her for Mother’s Day.

At Hester Academy school, a young boy is drawing a picture of his family, his sister is shown far away from the family and he says his little sister is gone away with Luke, a grownup and he doesn’t think she is ever coming back, she has been gone for a week. The teacher tells the principle, who calls the police. Finn and Rollins speak to the teacher, she says the parents said the little girl is in bed sick and Luke is their son’s imaginary friend.

The teacher doesn’t believe it, she thinks something is off. Next stop is the apartment of Claire and Paul Lee, the little boy’s parents. Claire says it is all a complete misunderstanding, Luke Davis is a trusted family friend they are rebuilding houses for refugees up state and their daughter is with him. Rollins doesn’t understand why they lied to the principal. Paul says he didn’t want her to be judged from missing class for a church project. They haven’t heard from Beth, she doesn’t have a cell phone. Rollins wants Luke’s cell phone, the school filed a police report, so they have to investigate.

According to the county sherrif the mission exists but Luke Davis was using a burner phone. Rollins and Fin head to Two Echoes Church volunteer site, Luke and Beth never showed up.

Benson and Finn go back to see the Lee family, Luke and Beth left in a rental vehicle. They tell them about the burner phone, usually when people use them they have something to hide. Beth has a computer, Finn goes to check it out. Paul is beside himself, he feels so bad for having let Beth go. Claire is speaking to Benson, she has a video of Luke from a party.

Rollins gets a text, it is the video with Luke showing Beth how to play a guitar. At Two Echoes church, pastor Adams tells Rollins that they are not at the mission, but there is no problem, Luke is trustworthy. Pastor Adams says they did a thorough background check – they give it to Rollins. Luke Davis is Nick Pearce, the son of a wealthy family in Rhode Island, they have no idea where he is. Benson tells Claire that they believe their daughter was kidnapped.

Paul is furious and doesn’t understand why he would take their daughter. Claire is naïve, she keeps saying Luke is a nice guy, he wasn’t targeting Beth, he was targeting her and Paul can never know. Luke and she are very much in love. They were having an affair for over a year.

They do some investigation into Nick’s background and find an ex-girlfriend who he loaned money to. She says that had a fetish for young girls, her daughter. She could never say a bad word about him to her daughter, he brainwashed her. She remembers a cabin where he took her, he gives them the information.

Benson meets with Paul and Claire again, she says that he has been grooming their daughter for over two years, she could react in a negative way when they find her.

At the cabin, Rollins has backup, and they bust in. Fin handcuffs Nick and tells him that he is under arrest. Beth is upset, she says she wasn’t kidnapped, this is God’s will.

At the station, Benson tells Paul and Claire that Beth is ok. Claire wants them to do a rape kit. Benson says they cannot force her, it is not an option in New York. Claire is protecting Nick and Paul is upset, he reminds her that he kidnapped their daughter.

Carisi and Finn are questioning Nick, he says he and Beth were planting the seeds for a new church near the cabin.

Rollins and Benson speak to Beth, she wants to go home to see her brother Elijah. She tells them that Luke did nothing and they should not have arrested him. Benson signals to Rollins to leave so she can talk to Beth. A little coaxing and Beth tells her that she and Luke are in love with each other. She says Luke told her that no one will understand God’s truth.

Nick is in court and pleads not guilty, his lawyer says that Nick will testify that Paul Lee forced him into demeaning sexual acts that opened him up to being blackmailed.

Nick is let out on bail. Carisi and Finn speak to Paul Lee, he says he should have told someone. He thought he was as ashamed as he was. Rollins goes for a walk with Claire, she says she was lonely because things had changed between the two of them.

Paul says they were breaking down the stage into a truck, it was Nick’s birthday, he had bourbon and beer, it was his birthday. They were sitting in the theatre, talking, it got intense, they hugged, then Nick put his hand on his leg. Then, he unzipped his pants. He just went with it because it was easier than embarrassing him. Nick swore he wasn’t gay, he just felt close to him, and they agreed not to tell anyone, it was a sin, they prayed. It happened once or twice after that. Paul doesn’t want Claire to know, it will hurt her. Carisi says the defence is going to use it. Nick was using Paul and Claire to get close to Beth, he was obsessed. Nick knows how to pick his victims.

Nick’s lawyer calls a meeting, he wants Carisi to drop the charges. Carisi says no way, there is still kidnapping and the DA is never going to agree to a misdemeanor. Nick says he wants to marry Beth, he wants to protect her for the rest of her life. If her parents give their permission, all this can go away, Beth is 14. Carisi says no way and he has heard enough, he leaves the room.

The Lee family messages Rollins, Beth is missing. Benson puts out an alert, Claire is freaking out, she thinks she will never see her again. A waitress noticed Beth leaving through from the bathroom, she looked like she changed and said she had to meet someone.

Pastor Adams’ wife calls the precinct, she thinks Beth is following a bible quote about that refers to the song “Bridge Over Covered Water,” Rollins thinks she is going to meet Nick and get married. Fin recalls that she had a screen saver of the Brooklyn bridge. They head over there and find Nick and Beth together exchanging vows, Beth reveals that she is carrying God’s baby.

Benson and Carisi tells Paul and Claire, they are both distraught. Benson tells them that Beth is obsessed with him, there might be one way to get Nick out of her life. Claire and Beth go for a walk, Claire says she and Paul were wrong, they might have a solution. Claire says she can get married in the state of Maryland at 14. They just need proof of the pregnancy, that Nick is the father and the charges will be dropped. The DNA proves Nick is the father, that proves rape two. Claire and Paul plan on telling Beth the truth, they want to raise the baby on their own, work on their marriage and pray Beth forgives them.

Back to Olivia and her son, she opens he present and it is a collage of photos of the two of them, she loves it and hugs her son.