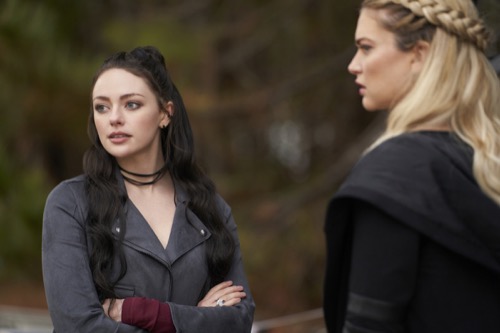 Tonight on the CW their new supernatural series Legacies air with an all-new Thursday, March 3, 2022 episode and we have your Legacies recap below. On tonight’s Legacies season, 4 episode 7 called, “Follow the Sound of My Voice,” as per the CW synopsis, “Hope (Danielle Rose Russell) and Lizzie (Jenny Boyd) find themselves at a carnival with an unusual cast of characters. Back at the Salvatore School, students are speaking their minds, without knowing why, which makes Jed (Ben Levin) reveal a secret and Cleo (Omono Okojie) works on protecting one of their own.

Meanwhile, Kaleb (Chris Lee) and MG (Quincy Fouse) set out on a mission, which does not go as planned. Also starring Matthew Davis, Aria Shahghasemi, and Leo Howard.”

Tonight’s episode begins with two sisters are at a carnival filled with circus acts, games, and more. They see a haunted tunnel. The oldest challenges the youngest to make it through the tunnel and she will lend her a necklace she loves. Inside, the oldest sister suddenly disappears. A man threatens the younger sister. No one will believe her, he tells her. Her sister isn’t coming back.

At the school, Jed tells Ben he will show him around on his first day. Now that he has a bracelet from Cleo he isn’t attracting monsters anymore. The headmaster comes on the PA system and starts to speak. Seconds in he begins to speak the truth after drinking from his coffee. Monsters have been coming to the school because something is attracting them, he tells the students. None of them are safe, he warns.

Hope and Lizzie arrive at the carnival. They have some things to do, Hope tells Lizzie before they hunt down Aurora. She needs Lizzie to work on her new powers and self-control. Meanwhile, Kaleb and MG head to find Ethan. No one has seen him.

Cleo and Finch try to figure out what caused the headmaster to speak the truth. Meanwhile, the students are starting to fight until Eve Bloom, their new headmistress arrives. It is really Aurora.

Hope and Lizzie focus on Lizzie perfecting her powers while at the carnival. Lizzie tunes into a sad little girl who tells them someone took her sister. Hope arrives. They plan to help her.

At the school, the students are also speaking the truth to one another without being able to control it. Jed tells Ben he doesn’t want to be around him. He cannot help but speak the truth.

Kaleb and MG arrive at Ethan’s. Just before they talk to Maya, Ric appears. Cleo confronts Eve. She knows she is Aurora and she knows why she is there. Aurora is looking for the wood from the tree on the grounds to kill the tribrid. She knocks Cleo out.

At Maya’s, she tells Kaleb and Ric it’s as if she has a spirit in her home, eating things and moving things. They know it is Ethan using his ghostly powers. They pretend to hold a ritual, talking to the ghost. Maya starts to become suspicious of their motives. Kaleb makes her go to sleep. Ethan appears. He wants them to leave and let him go.

Lizzie goes through the Haunted Tunnel completely unphased until she sees herself in the mirror. A man outside approaches Hope. He is a vampire and doesn’t like competition on her grounds. Inside, his men inject Lizzie with something just as she finds the girl’s sister.

Cleo finds Jed and Finch to warn them about Aurora. They need to stop her. Hope hears Lizzie call for help. Aurora finds Ben in the gym. She has an interest in him and his strength. She brings him out to the woods. After injuring him so he cannot move, she asks him a number of questions.

MG tries to convey Ethan to come back to the school. He doesn’t feel like he deserves to go back. He was a coward. MG confesses to his own fault – he killed Landon. He was eventually given a second chance. Ethan can have that too. Back at the school, Jed and Cleo find Ben in the woods against a tree with a warning from Aurora.

Hope and Lizzie volunteer to be hypnotized by the man who killed the girl. They make him a laughing stock on his own stage before killing him, cutting him in half. The crowd thinks it’s all a magic act.

Jed tells Finch he might like Ben more than a friend. He is scared. Finch tells him he can confide in her. Kaleb and MG talk too. It will be good for them to be back together. Ethan finally reveals to Maya what is going on. He is headed back to the school.

Lizzie consoles the sister who misses her big sister. She uses compulsion on her, telling her that she won’t feel alone. She gives her a necklace she took off of her sister. After, Lizzie asks Hope to keep them tied with the sire bond. She needs it after losing Josie.

Ben wakes to Cleo. She didn’t heal him. He healed himself. He tells Cleo about how Aurora wants to use the gods to kill Hope. Ben is scared she will wake the gods.