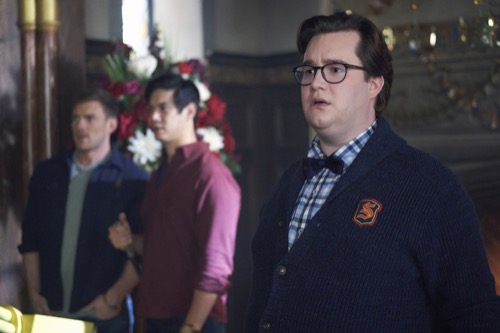 Tonight on the CW their new supernatural series Legacies air with an all-new Thursday, March 31, 2022 episode and we have your Legacies recap below. In tonight’s Legacies season, 4 episode 9 called, “Was This the Monster You Saw,” as per the CW synopsis, “Lizzie (Jenny Boyd) continues on her quest, with mixed results. Ben (guest star Zane Phillips) reveals more about his family and its history and Jed (Ben Levin) finds his feelings deepening.

Cleo (Omono Okojie) is concerned about her recent changes. Meanwhile, the Salvatore School students come together to celebrate one of their own.”

In tonight’s Legacies episode, its Roman times in 100 A.D. when a young boy is approached by an exiled witch. His mother tells him to get away from her. In present times, Jed works on a confetti cannon for Ric’s welcome home party. Cleo attempts to hang a banner with her magic but she is still having trouble. Kaleb assures her Ric will help when he returns.

Lizzie and Aurora are still on the road while MG picks Ric up at the hospital. He hands Ric and cane and tells him he will be his accountability buddy. At school, they are all ready to jump out to surprise Ric but its Hope. They aren’t happy to see her. Just then, Ric walks in. He is surprised too.

In his office, Ric is angry at Hope. She is the reason he is a mess and his daughter isn’t here. Hope tells him she needs an army to face the Gods. Meanwhile, Lizzie and Aurora are on the side of the road fighting about Tristan and Hope, as well as the gods.

Hope meets with several of the squad. She tells them they need to help. Some of them may die. MG and Ric stand outside. MG listens in. Hope comes out soon after to tell them the squad won’t help. Luckily, she pulled off Ben’s bracelet so they will all be faced with trouble.

Ben tries to take off. Jed stops him out in the woods. Ben tells him to chain him up. Jed refuses. The two are sharing a moment when a crazy clown comes out of nowhere and bites Jed’s shoulder.

Inside the school, Jed rests while he dreams of his dad and childhood. Ben tells Ric what happened and about the clown. Hope thinks she can kill the clown. When Ben tries to object, she snaps his neck.

Ric and MG discuss the origins of the clowns in Roman times and how villages would use them to cast about their sins during a harvest festival. The clown eventually came to life and tortured them. They could use the clown to bring out Hope’s humanity. That night MG, Kaleb and Wayne lore her to a fire. The clown comes out and bites her. She throws the slime from the clown at them in the form of a knife. They all go down.

Jed recalls in his unconscious state when he was just a boy and was pitted against a friend by their wolf pack. Ric comforts him while Ben remains unconscious too. He hears Cleo yelling and comes to her aid. Kaleb locked her away to keep her safe. Ric admits MG reigned his powers over him too to keep him safe.

Lizzie finds herself stuck in a deadly position when she is locked in a cell with daggers coming at her. Aurora comes out. She can save her if she can agree to some terms.

Ric writes his sins on paper, throwing them into a pile. The clown comes to eat it. When his back is turned, Cleo attacks. They head to find the others. Meanwhile, Hope fights with her human side. Her humanity tells her she is using her other sides to cope. Hope comes to outside. Cleo tries to help her up but she declines and walks away. Cleo rushes to the guys on the ground.

As a young boy, Jed stands in a circle with his friend. The pack chants for him to pick up his bat and kill his friend. He is the stronger wolf. Ben comes to out in the woods. He is crying. Ben arrives. He sees his tears. Jed confesses he had to kill his dad to save a friend. The clown brought this all up. After he killed his dad, he ran off. Ric found him. He never saw his friend again. He doesn’t want to be the guy his dad wanted him to be. He is ready to feel and be better. He kisses Ben. Ben kisses him back.

Ric tells Hope they don’t need her at the school but they do want her there, the old Hope anyways. Meanwhile, Aurora makes Lizzie take a blood pact. The person they have been looking for arrives, Vulcan. Hope agrees to new terms with Ric and the others. She plans to make Ben a new bracelet. Cleo and Kaleb have a heart to heart about her doubts and her lack of power. She needs him to stand beside her and not in front or behind.

MG pays Hope a visit. He seems to be getting to her when it comes to human emotions. He leaves her a blood bag and goes. Her human side appears. She isn’t going away.