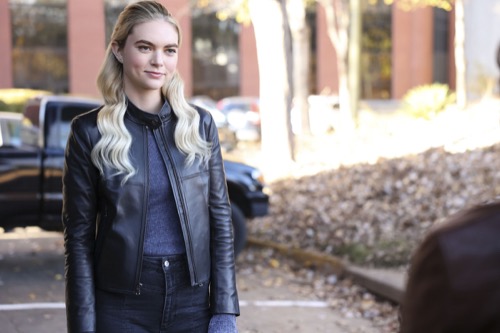 Tonight on the CW their new supernatural series Legacies air with an all-new Thursday, February 24, 2022 episode and we have your Legacies recap below. On tonight’s Legacies season, 4 episode 6 called, “The Story of My Life,” as per the CW synopsis, “Cleo, MG and Jed work together on an unusual mission. Alaric, Landon, and Ted figure out what is next for them. Meanwhile, an unexpected source takes Hope by surprise.”

In tonight’s Legacies episode, MG decides he wants to get Ben out. Jed isn’t so sure. He needs to think about this. Meanwhile, Ric and Landon are trying to figure out a riddle. Back at school, Jed finds Ben with objects sticking out of his chest in the library after he was attacked by a monster.

Hope visits another college to speak with a professor about an artifact she has. She cannot ask Ric. After speaking with he sees she has transitioned. She needs to destroy the artifact. She threatens him. He tricks her by trapping her in a room.

Back at the school, Cleo tells MG they need to trap the monster in their school. Meanwhile, Jed and Ben talk. Ben tells Jed about his village and the Gods. He’ll understand why he is telling him all of this soon enough.

Lizzie comes to and attacks the professor who has trapped Hope. Lizzie is new at this all and runs into a door after threatening a nearby student and biting the neck of the professor. She is determined to track down Hope and kill her.

Lizzie tracks down Hope in the room she is trapped in. While Hope has been struggling to find a way out, Lizzie gets out, leaving Hope in there with one try.

Ric feels doomed. He cannot get them home. Landon tells him they cannot let their sins define them. They can team up and figure it all out. This gives Ted and idea. They start to solve the riddle keeping them trapped.

Ben tells Jed about the death of his lover, his birthright, his father and how monsters were born. He also shares that he will only ruin what they have at the school. He is a Demi-God who stole magic from the Gods and gave it to the average people. He heads to the door to leave. Meanwhile, Lizzie comes back to find the professor she attacked. He is alive. This shocks her and has her asking for his help. She cannot kill Hope like she thought she could.

Lizzie shows the professor what she means. She swings weapons at Hope but wont actually strike her. She even protects Hope. Hope laughs. She doesn’t have to worry, Lizzie wont be alive for long.

Out in the woods, Ben saves MG from the monster that was torturing the school. Ben and the monster disappear into thin air.

Lizzie and Hope discover Lizzie is a sire to Hope. Lizzie looks angry and irritated by this all. Back at the school in the woods, Jed and Cleo find MG. Ben reappears in the woods. Cleo gives Ben a bracelet. It protects him from the monster who tames after she locks the bracelet on his wrist.

Hope tracks down a student that has answers she needs. The student has superpowers. She attacks Hope. Lizzie intervenes. The female student rockets way into the sky. Hope thinks she may be a god.

Jed and Ben share a beer that night. Ben tells him he cannot stay. Jed tells him to give it a shot. The school is filled with people like him. Hopee tells Lizzie she needs her help and she doesn’t have a choice. Lizzie projects herself to MG to tell him she is leaving to visit her mom. Lizzie isn’t happy. But Hope promises after they kill Aurora, she is free.

Ric and the guys solve the riddle and land in a bar. It’s there they meet a genie.