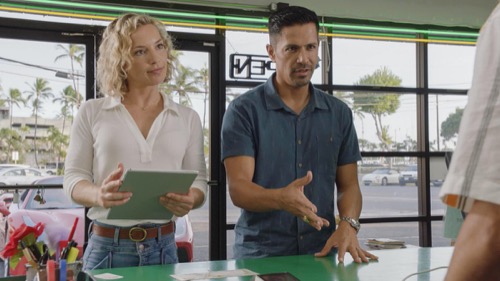 Tonight on CBS their reboot of the classic series Magnum P.I. airs with an all-new Friday, January 14, 2022, episode and we have your Magnum P.I. recap below. On tonight’s Magnum P.I. season 4 episode 11 “If I Should Die Before I Wake,” as per the CBS synopsis, “A nun hires Magnum and Higgins to investigate a mysterious and large cash donation made to a parishioner undergoing medical treatment at the church.

In tonight’s Magnum P.I. episode, Jin started a new business. He became a dog walker. He wanted to pitch the investors about his new business and by investors he meant his friends. But only Higgins bit. She wasn’t going to invest. She was just going to use his services. Higgins and Magnum were later called away for a job and this case was a peculiar one. They got the call from the catholic church. One church in particular. A nun had called them because this church was raising money for a teenager with a rare disease and who didn’t have the best insurance. She needed a radical therapy. The church knows the family and offered to help raise the money and jus that morning they surpassed their goal. And not in a way they thought.

Someone donated a bag of cash to the church. It was a hundred thousand dollars. This was enough for Sierra to get treatment and so the concerning part was that one of the money stacks had blood on it. The nun suspects the money came from an illegal source. She wanted the money to be tracked back to whoever belongs to and to see if they’re alright. The private investigators agreed to take the case. They later asked Jin as their resident criminal if he knew anything about the money. He said that he knows was cleaned by a guy name Taz. He also gave them the addresses before taking the dogs on a walk and so Higgins and Magnum were out of the house when Jin poisoned the dogs.

He didn’t mean to poison them. He thought he was helping by giving them energy bars. It wasn’t until they got tired after a mile and he just happened to be on the phone with Kumu that he learned that giving the dogs anything chocolate is toxic to them. It poisons them. Jin rushed the dogs to a vet. The dogs had to be induced to vomit. They threw up what little chocolate was in their system and they were going to be fine. It was a close call. It made Jin realize that maybe dog walking isn’t for him. He almost killed his only clients. And so he might want to take a break from doing this for a living.

Higgins and Magnum meanwhile checked with the money launderer. They found out that an anonymous client uses a courier to drop off the money and that the money was supposed to dropped off last night from this client, but never arrived. Higgins and Magnum tracked down the missing courier. They later found him dead. Someone ran him off the road in his car and then killed him to steal the money. The money was later dropped off at the church. This means someone in the underworld knows about the courier service and they knew that Sierra was going to lose motor functions if she didn’t get the money she needed for treatment.

Both Mangum and Higgins went back to the church. They spoke to the nun. They even met Sierra and her father and once those two left they asked the nun if she recognized off of their list of suspects. She recognized one man named Leon. Leon turned his life around after leaving prison. He works at the church and he would have known about Sierra’s surgery. Magnum and Higgins went to Leon’s house. They found him dying of a gunshot wound. He spilled everything to them. he was one of three who planned on stealing the money from the courier and the plan went topsy turvy after his “friends” killed the driver.

Leon didn’t sign on to kill anyone. He became a loose end and the other two tried to take him out. He shot back. He ran off with the money and that’s when he donated it to the church. Magnum and Higgins called for an ambulance for Leon. They also went looking for this Red and Izzy. They tracked them back to a veterinary office. The door were locked. They knew Izzy had a gun wound and they correctly assumed that she and her boyfriend have taken hostages including the vet in order to get stitched up. They also realized when Higgins recognized her car in the parking lot that Jin and the dogs were inside.

They called their detective friend. They filled him on the live hostage. He called for SWAT. The detective later called the people identified as Red and Izzy. He told them the police were outside. He asked for the safe release of the hostages. Red demanded ransom. He wanted five hundred thousand dollars in cash. He also received a call from Mr. Shuma’s people demanding to know where the money is. They figured out Red and Izzy stole the money from the courier. Red and Izzy shifted blame. They claimed it was just Leon. They even said they tried to recover the money and couldn’t.

Mr. Shuma’s people then went looking for Leon. They couldn’t find him and instead they found the fliers for Sierra. Mr. Shuma’s people then went to the church. They were questioning the nun when Magnum showed up with the police and arrested. He managed to sneak his phone to Jin. Jin told them about the conversation Red had with Mr. Shuma’s people. He also helped them capture Red and Izzy. He snuck the phone into Red’s pocket and that helped the police track him when they busted in. They arrested Red and Izzy. They freed the hostages. Higgins also thanked Jin for looking after the dogs and so that made him realize that he wanted to stay in the game.

And later, after Magnum lied to the nun to get her to give the money to Sierra, Jin made his pitch at the bar’s talent show to get investors to sign on to his dog walking scheme.

But that wasn’t the big news. The big news is that Rick heard from Suzy and it turns out Suzy’s pregnant. And now he gets to become a father.