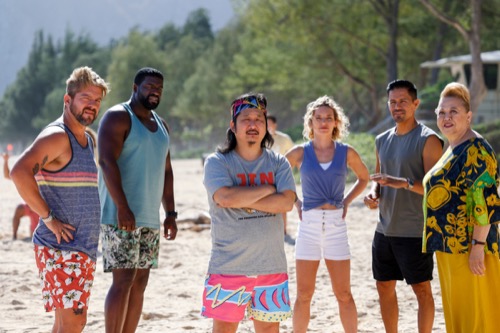 Tonight on CBS their reboot of the classic series Magnum P.I. airs with an all-new Friday, March 4, 2022, episode and we have your Magnum P.I. recap below. On tonight’s Magnum P.I. season 4 episode 15 “Dead Man Walking”,” as per the CBS synopsis, “When Magnum balks at notorious crime boss Osi Shima’s (Eijiro Ozaki) request to find his missing son, Magnum learns he’s been poisoned and has only eight hours to locate Shima’s son to earn the antidote, or else he dies.”

Tonight’s episode begins with typical Magnum! He signed up the gang for a tug of war match and later skips out on practice. The others would have been annoyed if the tug of war hadn’t been for charity. The winner of the competition gets a sizable donation to the charity of their choice and so the gang wanted to do it. Magnum even wanted to do it. He only missed practice because he got called away on what he thought was a case but was instead a setup. Magnum was poisoned with sushi. He was given a toxin that would kill him in eight hours if he didn’t get the antidote and he could only get the antidote once he found crime boss Osi Shima’s son.

Shima’s son Kota was kidnapped. Kota was destined to take over his father’s business one day. His being taken was clearly a move against Shima and Shima wants whoever was behind the kidnapping. But the poisoning thing was also going to hamper Magnum. He was forced to live on borrow time and find Kota without his symptoms and ideas of possible death getting in the way. Luckily, Magnum managed to call his team. He made sure they listened to his conversation with Shima and he ended the call before his cell phone was confiscated. Magnum’s friends worked on finding a cure for him.

Magnum however focused on finding Kota. He traveled with two of Shima’s people as they went to the site where Kota was kidnapped from and Magnum noticed that it was a busy street. He asked Shima’s people to use their tech guy for reaching out to dash cams from ride shares in the area. Tower didn’t think it would yield much. But it did. They learned that the car that was tracking Kota had been contacted to Soko and that was an area run by a rival South Korean gang named Juma. Technically, Jumak and Shima have a truce. Things were tense lately since Jumak thought Shima stole a drug shipment from them and so if they were behind the kidnapping this would be an escalation.

An escalation could lead to an all-out war between the two biggest gangs on the island. People were going to die from it and it wasn’t always going to be the bad guys. There was a high probability that a lot of innocents were going to die if the war happened. Magnum wanted to stop that. Shima’s people wanted to stop that as well because a war was bad for business. They contacted Shima after they learned that the car stalking Koto was connected to Soko. Shima was filled in and he called for a chigu. A chigu was a meeting between bosses. Shima wanted to get his son back and nothing else mattered.

Not even Magnum’s life. It’s why Shima sent Magnum in alone to go search Soko for Kota. Shima’s people couldn’t be seen there or interfere in a rival’s territory because that alone could risk war. Magnum was starting to experience symptoms at the time. He was coughing and having an unclear vision. His friends meanwhile had tracked down the guy he supplied Shima with the poison. It turns out Shima never had the antidote. He only ever ordered the poison and so he always planned on killing Magnum. The guy he ordered the poison from didn’t even have the antidote. The antidote was on Maui.

Magnum’s friends still got something to help alleviate Magnum’s symptoms. Which was a little too late for Magnum. His vision was so messed up that he got captured by Jumak’s people and so one of Shima’s people had to go in after him. Her name is Min. She was Vietnamese. She was in and out of prison through all of her twenties or so she claimed and now she was working for yakuza. She got the job when she helped Shima evade the police. Min went in after Magnum and she rescued him. Magnum came to suspect that she wasn’t really a gangster. She was actually an undercover cop with the gang task force.

Min rescued Magnum when she didn’t have to. She would have given him the cure as well, but she was roped in when it happened and she needed a reason to return without Magnum and so he shot her in the arm. It was a graze. It also helps her sell her story to Shima. Magnum ended up calling his friends afterward and they got him something to ease his symptoms while TC was flying to Maui to get the cure. They thought that would be the end of it only Magnum said he realized something. He realized that the Jumak wasn’t behind Kota’s kidnapping. What his team found also confirmed this. Tower had lied about what his tech guy said.

Magnum said that Min mentioned that some members of the yakuza hated the truce. They wanted war. Magnum came to realize that Tower was one of those people and so Magnum played him. He pretended to find the drug shipment that Tower stole. He then confronted Tower at the chigu and the truth came out. Tower tried to negotiate for his life for Kota’s son, but Magnum’s friends had already found the boy and so Kota is safe.

And Tower can now be handed over to the Jumak so that they could torture him for the location of their drugs.

Magnum later got his cure and he was still able to make the charity tug of war that his team won.