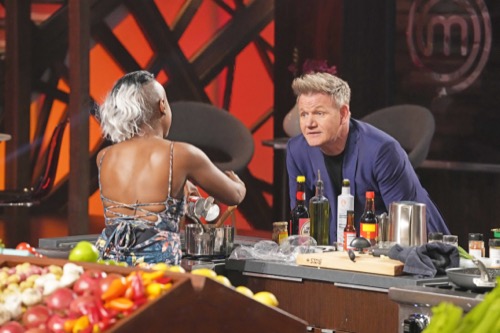 Tonight on FOX Gordon Ramsay’s Masterchef returns with an all-new episode on Wednesday, June 8, 2022, season 12 episode 3 called “Back to Win – Audition Battles (Part 3),” and we have your weekly Masterchef recap below. On tonight’s Masterchef episode as per the FOX synopsis, “With only six aprons left, the judges round out auditions and give a lucky few chefs a chance to return to the MasterChef kitchen. Each 45-minute audition battle brings the contestants one step closer to being in the top 20.”

With only six aprons left, the contestants went into a frenzy to win one of them. Felix from season three was back and along with Olivia from season six and Fred from season ten and Bri from season 10 – they made up the first group to compete tonight. All four were great presentations. They were all told that their plates looked beautiful once they put their special magic to them and so they deserved awards for how beautiful they could plate a dish. But they often failed at flavors. Olivia for one was someone who was told that her flavors were a little too off and so she could have played it safe tonight. And she instead went out there with her flavor palate.

All four also didn’t return to their regular 9 to 5 jobs after their time on the show had come to an end. They instead turned their passion for food into careers and Fred for one even went on to work with a former judge in her bakery. Fred chose to cook a dessert tonight. He, unfortunately, ran into some trouble in the kitchen. His chocolate wasn’t forming the way he wanted it to. There wasn’t enough time to do everything he wanted and that led him to rush a few things. Bri did the same. She decided to cook with a fish as a protein and the judges saw it while she was cooking. And they all believed it might be undercooked.

Then time was called. The chefs stopped cooking. They brought up their food and up first was Felix. Felix prepared Pork Belly & Cabbage Dumplings with chili oil. The chili oil was her father’s recipe. She had wanted to include her heritage in her food because she didn’t do that last time she was on the show. Her dish looked beautiful. It tasted great, but the dough wasn’t fully cooked. Next up was Bri. Bri prepared Pan Seared Seabass with Fennell Puree and Fresh Tomato water. Again, the word beautiful is used because her dish looked like a work of art. It also tasted amazing. Her fish wasn’t undercooked in the slightest. It was just perfect.

If anything, Bri’s dish tasted better than it looked. Next up was Fred. Fred decided to go vegan. He prepared a Dark Chocolate & Tofu Mousse. The word tofu threw the judges because they didn’t think Fred should have taken such a risk on his big night. They all thought his dish was going to suck before they tasted it and instead it was flavor. It was sweet. It was acidic. It was amazing that he managed to cook that in only forty-five minutes. Then there was the last dish of this group. Olivia prepared Pistachio Crusted Lamb with White Bean Puree. She didn’t remember if she seasoned it or not and so it didn’t matter how beautiful it looked or that they enjoyed the taste. The judges were looking for confidence this season.

The two young chefs walking away with aprons were Fred and Bri. They were back to show that they could win and they’ve already proven how much they’ve improved. As for the next group, that group consisted of Samantha from season nine, Jamiee from season five, Alejandro from season eleven, and Keturah from season 10. They’ve all come such a long way since they were eliminated. They all hoped for aprons. But not much has changed. Samantha went on to go to culinary school where she graduated with honors. Jamie who suffered from muscle spasms during her season went on to be diagnosed with a neurological disorder. It doesn’t sound like good news but it gave Jamiee answers and she was able to get treated for the disease. And learn how to live with it.

Alejandro was still the boastful young man. He was putting on a show in the kitchen tonight and his time as a personal chef has only added to his flare. Only Keturah was a mess in the kitchen. She made snide comments about Alejandro playing to the crowd because she said serious chefs needed to focus on the food and not the crowd, but she cooked her pasta for a long time. Putting it at risk of being soggy and gummy and so she was rattled while trying to plate it. She seemed a little lost. Which wasn’t normally like her. Keturah did taste her food. She seemed happy with it and so it was up to the judges to determine if it was cooked right.

The judges started tasting food. Samantha went first. She prepared an Egg Yolk Ravioli with Brown Butter Sage Sauce. It looked great and it tasted amazing. Samantha had shown great skill when she prepared that dish and so culinary school did wonders for her. Next up Jamiee. Jamie prepared Pan Seared Rainbow Trout with Chips and Salad. It was a little too basic. Even for the judges. It tasted alright but it wasn’t wow and the judges were expecting a little more at this stage. Next up was Alejandro. Alejandro prepared Coffee Rub Elk Tenderloin with a Sweet Potato Puree. It looked award-winning and so the judges were glad to see he’s gained confidence.

It was just under-seasoned. Which was better criticism than what Keturah received. She was told that her dish looked so hideous that they needed a sick bag. Then they tasted it. Chef Ramsay spits him out rather than swallows it. The dish was just too confusing. It didn’t even deserve a name. It had pasta, caviar, and blackberries, and it was just all over the place. Keturah took a risk and it didn’t work out. The aprons, therefore, went to Samantha and Alejandro. Samantha getting hers was an easy decision. Alejandro on the other hand got him because he showed improvement. Then there was the next and last group in the competition.

The last group consisted of Shelly from season six, Sheetal from season one, Gabriel from season eight, and Malcolm from season four. Most of them went on to go to culinary school. They got officially trained and Sheetal who was known as the Spice Queen even began her own tequila brand. Once the chefs had finished with their little miracles, it was time for the judges to judge. Up first was Gabriel. Gabriel prepared Port Wine Glazed Pork Chop with Southern Style Braised Greens and Chipotle Corn Puree. It looked great and it tasted even better. Next up was Shelly. Shelly prepared Jerk Chicken Taco with Coconut Rice and Slaw on the top. Her dish looked beautiful and it tasted great. The judges just thought there was no need for the rice.

Malcolm went third. He prepared Dried Cranberry and Apple Bread Pudding with Bourbon Caramel sauce to pour on the top. He wanted to prove that he could bake because he got eliminated from a baking challenge. He prepared his daughter’s favorite dish. The only criticism on that one was that it might not be enough to compete against the others. As for Sheetal, she went last. She prepared Halibut Corn Tostadas with Avocado Crème and Slaw. Her dish tasted great but its star which was the halibut was slightly dry. And so the two people walking away with the last aprons were Shelly and Gabriel.