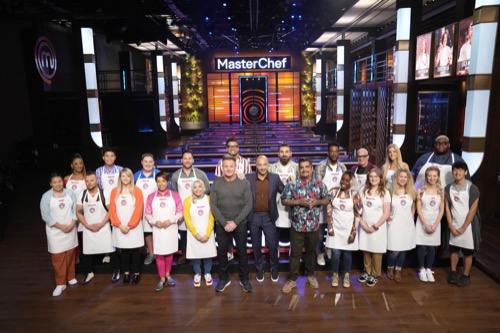 Tonight on FOX Gordon Ramsay’s Masterchef returns with an all-new episode on Wednesday, June 15, 2022, season 12 episode 4 called “Dish That Sent You Home,” and we have your weekly Masterchef recap below. On tonight’s Masterchef episode as per the FOX synopsis, “In the first elimination round of the season, all 20 chefs must cook something inspired by the dish that originally sent them home.

The chef that recreates their elimination dish in the most elevated, refined, and skillful way will win immunity.”

Not only did they have to cook a dish that’s haunted them for years, but they also had to make three exact copies of it for each judge and they all had to be consistent. The winner of the challenge will be given an immunity pin. Something that saves them from elimination in the future and that can be played at any time. The contestants were all rooting for that pin. They had six minutes to cook three exact same dishes and naturally everyone wanted to show how far they’ve come since the first time they cooked the dish. They all came up with ideas to elevate their dish. Emily’s cake fell over last time and so this time she was making a deconstructed cake.

Tommy made sliders last time. He was elevating his dish by adding truffle oil as well as a fried green tomato and seasoning in his sliders. It was hard for everyone to make sure that all three dishes were exactly the same. Alejandro struggled with his dish because he was making a fish dish only he struggled with skinning all three fishes. Gabriel however had a pasta dish that he was worried about. The biggest moment of his season had been when he was sent home because Chef Ramsay offered to pay for culinary school for him. And now Gabriel feels like he can’t make a mistake or else Ramsay would have wasted his money on him.

The contestants were also asked if they would use the pin on themselves or if they would give it to someone else. They all chose to keep it for themselves. Not a single person even considered giving the pin to someone else. They all wanted it to save themselves. Michael was taking a huge risk with making a puffy taco because if they didn’t puff well – he was screwed. The same thing for Cate because she had souffles and making one souffle is hard and so making three exactly the same was going to be an uphill battle. Stephen made panna cotta. He didn’t use enough gelatin and his panna cotta looked like chocolate milk.

Stephen was hoping that there was at least one other dish that was worse than his. In the meantime, he cried a little. He was very sad about his performance. He wishes he could have done it differently, but time soon ran out. It ran out and not everyone was ready. Some did their best. Some started talking about themselves going home before the judges had even tasted the first dish. Only time was called. The contestants all had to leave it to a higher power. The judges went around tasting the dishes. They asked questions. They didn’t really give an opinion one way or another if they were happy or displeased until they started calling down the top three dishes.

The first dish they called was Willie’s. He created a Cajun Dumpling with Spicy Vegetable Broth. The judges were dying to taste it because it smelled so good and so they finally got a taste. They said it was amazing. They said Willie had redeemed himself. The next dish they called was Emily’s. Emily created a Deconstructed Black Forrest Gateau. They all enjoyed her dish. They enjoyed her new take on it. They called it elevated. The flavors were all there and so was the texture. The next dish the judges called was Shanika’s dish. Shanika created an Egg Yolk Ravioli. The highlight of her dish was that the yoke was still runny as it was supposed to be and it tasted delicious on top of that.

All the chefs were safe from elimination tonight because they created the top three dishes. But the pin could only go to one person. It was rewarded to Emily. Funny story, Emily and Shanika have bad blood between them because Emily once dissed Shanika’s dish and so Shanika could have hated on Emily for that pin only she chose not to. The judges went on to the three dishes in the bottom. They called up Gabriel. His dish looked horrible. It also had a problem with the taste. His pasta was off and this was the dish that sent him home. He even went to culinary school since then. And so his saving grace was the fact that there were other dishes in the bottom three.

Stephen was in the bottom three with his panna cotta. It tasted okay. It just wasn’t his dish at all. It was chocolate milk. But Tommy rounded up the bottom three. Some of his sliders were missing buns. He ran out of time. They also looked a mess. His flavors weren’t there either. All three men in the bottom three did something heinous to their dish and so the judges could have sent them all home, but they chose to eliminate Stephen. He didn’t add a single measure of gelatin. And that’s why he was sent home.

Stephen was eliminated tonight and more will be eliminated in the future.