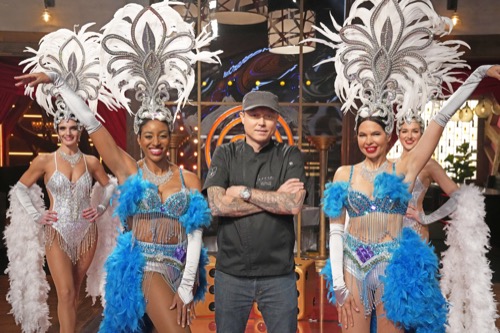 Tonight on FOX Gordon Ramsay’s Masterchef returns with an all-new episode on Wednesday, June 22, 2022, season 12 episode 5 called “Winners Mystery Box – Spirit of Vegas,” and we have your weekly Masterchef recap below. On tonight’s Masterchef episode as per the FOX synopsis, “This week, the chefs face their first mystery box challenge of the season. Season Seven winner, Vegas restaurant owner and cocktail connoisseur Shaun O’Neale, returns to the MASTERCHEF kitchen to dish out the challenge.

The chefs have 60 minutes to cook three identical dishes using the spirits they receive in their mystery box. On the line are immunity or elimination, as the chefs compete to create a dish with their respective spirit as the star.”

Tonight was the first mystery box of the season. But not everyone competed. Emily used her Immunity Pin to sit out this challenge and so that meant the pin was up for grabs again. The top eighteen also got to meet a guest judge. Their guest judge was Shaun. He won his season of “MasterChef”. He has also since then written a cookbook and opened his own restaurant in Las Vegas. His restaurant was known for highlighting the cocktails to go with the dishes. It was the spirit of Las Vegas, that the contestants learned they were all going to be cooking with alcohol. Some weren’t of the legal limit to drink and still, they had to cook with alcohol.

The contestants were all given different bottles of alcohol. Some hadn’t even tasted what their bottle was and so that left a lot of them floundering. Poor Tommy was in the bottom three last time. He was hoping to make a redemption this week and yet he was given scotch. He’s never cooked with scotch. He’s never even tasted scotch. He was a white wine or champagne man. Yet, he still tried to make the alcohol work. He wasn’t alone in that sentiment. Brandi got limoncello. She said it tasted like a cleaner. She, therefore, had no idea how to incorporate it into her dish. She chose to make a savory dish to get a sweet and savory flavor with the limoncello.

Cate got lucky. She got bourbon. She knew right away that she was going to bake. She didn’t really cut in a lot of time for that and so she was typically rushing through everything. She also wasn’t alone in baking. Most contestants go the dessert route. Michael chose not to be one of them. He got tequila. He was lucky in the sense that he’s cooked with it before and he had no problem with making a savory dish. The judges started walking around. They were looking at every dish and they worried about Brandi. She was doing a lot with her drink. The judges didn’t think she could pull it off and so she had to either surprise them or prove them right.

Dara was also in trouble because she was cooking about three desserts at once. She poured most of her Rum into one dish and it didn’t work out. She was trying to make a caramelized sauce with the Rum when it crystallized. Once it does that, there was no saving it. Dara didn’t know what to do after that and the others tried to help her. Even Emily tried to help her. She was calling down tips from the balcony and Dara tried to do her best. Another that turned out to be in trouble was Michael. He had overcooked his duck. He had to go running back into the pantry to grab more with just ten minutes on the clock left.

Cate’s cake was a piece of a hot mess. She went the sweet route because she wanted to prove that she could do it just as well as savory and that decision came back to bite her because her cake looked horrible. It was undercooked. She had to pick out parts that were cooked. Which meant it looked like crumbs on a plate. The judges took one look at that mess and they were all left disappointed by Cate. It was no surprise that she didn’t make it into the top three. The top three had Christian. He prepared Coconut Bang Shrimp with Mezcal & Apricot Sauce. It looked great. It tasted even better and he really did include the alcohol. And it was cooked out properly.

Not everyone cooked out the alcohol properly. The second person in the top three was Fred. Fred prepared Krem Pita with Phyllo Pastry & Miso Apple Brandi Butterscotch. He managed to cook phyllo in such a short amount of time that it was outstanding. It tasted great as well. Now, the last person in the top three was Brandi. Brandi prepared Cast Iron Seared Salmon with Sautéed Lemon Garlic Bok Choy and Limoncello Sauce. It was surprising how well that dish actually tasted. The judges had been thrown by Brandi. The only one who wasn’t surprised was Shaun. Brandi came second to him in their season and he knew she wasn’t to be underestimated.

That was actually the word the judges used. Peculiar! Nothing good could come from that saying in this kitchen and it tasted better than it looks. Even the plate was the wrong choice because all that brown and yellow was unappetizing. And in the end, the person eliminated tonight was Cate.

Cate’s cake was raw and undercooked and that’s why she’s going home.