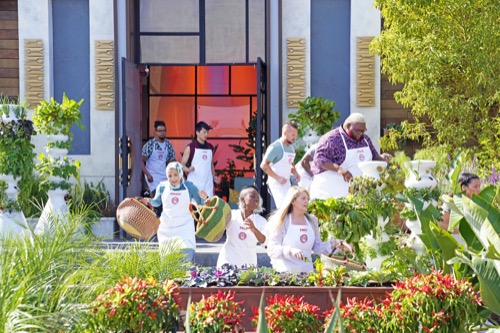 Tonight on FOX Gordon Ramsay’s Masterchef returns with an all-new episode on Wednesday, July 13, 2022, season 12 episode 7 called “Feeding the U.S. Coast Guard,” and we have your weekly Masterchef recap below. On tonight’s Masterchef episode as per the FOX synopsis, “Chef Gordon Ramsay shares his secret love for meatless, dairy-free dishes by demonstrating his infamous beef wellington transformed into a vegan dish made out of beets.

Chef Ramsay then challenges the contestants to create a top-notch vegan dish, using their knowledge of flavors and techniques.”

MasterChef was back with a new challenge tonight. It turns out Chef Ramsay has been keeping a secret. His secret is that he secretly enjoys vegan food. Yes, after years of hating on vegan food, he actually learned to enjoy it. He also learned to prepare it. Ramsay, therefore, challenged the top seventeen to prepare a fully vegan meal. He knew that some of them had never tried a vegan meal and so he showed them how it easy it was with a MasterClass. He taught a class in which he prepared a vegan beef wellington with beets instead of beef. The pastry was also vegan. The garnish was vegan. And it all looked beautiful on a plate.

The contestants didn’t taste it, but Chef Ramsay assured them that it was delicious. He also gave them sixty minutes on the clock to make their own vegan dish. Most of the contestants hadn’t cooked something vegan in such a short amount of time. Fred, who got his apron this season on a vegan dish, had wanted to be ambitious tonight. He was going to cook a vegan pasta dish. He was using tofu over the ricotta. He had never cooked this dish in such a short amount of time and still, he was set on making it. Fred wasn’t the only one who was ambitious either. Shelly used to a be vegetarian.

Shelly even raised her daughter to be a vegetarian. She only moved back to meat later on in life and it was because she became a chef. She wanted to be able to prepare as well as taste everything. Shelly prepared an ambitious dish. Then there was Samantha. Samantha wanted to make pierogi. She was used to a pierogi place in her neighborhood back in New York and so she wanted to pay homage to her roots. Only she was cutting things a little too close to the time. She was making each and every part of her dish separately. She planned on putting it together towards the end only the judges were watching her. They saw that she was running out of time.

Samantha was in such a rush towards the end that she sacrificed some of the grander elements to the dish. But this vegan challenge was bringing out great results. Shaniqua made her own mozzarella. She went vegan for three months at culinary school because she wanted to lose weight and so that’s when she learned to make great vegan food. Amanda was calling on her own past to make her dish. She was using her grandmother’s falafel dish. She said she got this, but that’s also what Shelly said and Shelly ran out of time. Shelly rushed through her dish and it looked such a mess that it looked like it would send her home.

Shelly’s dish was half-finished. She wasn’t the only one who ran out of time. They were plenty that the other contestants wanted to add to their dishes. They sacrificed several things about it just to make it work within the time frame. Then time was called. The judges went around each station looking at the dishes. They liked some. They liked how Bowen made tofu scallops. It looked cool. They liked that Shaniqua made her own mozzarella. They felt underwhelmed by Samantha’s dish because she made a stuffed potato pancake. They asked Shelly where the other half of her dish went. And it was on and on criticism with everyone there.

Once the judges were done with their inspections, they called the three top dishes there tonight. Derrick got called. He made a Beets Tartare with vegetable chips. It looked beautiful and so naturally something was wrong with it. It needs a touch of chili in it. Some kind of spice to bring the dish together. The next person they called down was Amanda. Amanda made Falafel On Homemade Pita with all the garnishes included. Hers was another beautiful dish. It was street food elevated to restaurant quality. It also tasted great. The judges appreciated they each had their own falafel. And so the only criticism as if it was enough for this competition.

Bowen was the last person to be called down for the top three dishes. He created Tofu Scallops with a risotto. If anything, his dish didn’t need the risotto. Although it was great. No one would have used mango in a risotto until he did and now they love it so much that his dish was worthy to be in any of their restaurants. Sadly, there could only be one winner. The judges thought about it and they named Amanda the winner. She won the Immunity Pin. She, Bowen, and Derrick all made it up to the balcony. And that’s when the judges decided to name the bottom three dishes tonight. One of them was Shelly’s dish.

Shelly’s dish looked horrible as well as tasted off. It wasn’t up to her usual standards. The second dish in the bottom belonged to Samantha. Samantha’s dish was just too plain. It was too minimalistic. It didn’t look like she had sixty minutes to cook it. It also tasted like a frozen dish that was reheated. It was so mediocre. As for the last dish at the bottom, it belonged to Fred. Fred took a huge risk with his dish. He made Tofu Gnudi. He was told his tofu tasted as it came from a can. The errors in his dish were so overwhelming that it was difficult to eat his dish. The bottom three didn’t just disappoint. They failed at this challenge.

The judges deliberated and they chose to eliminate Samantha. Samantha didn’t need sixty minutes for her dish. Her dish could be done in twenty. It also tasted frozen. The judges hated it, but they were sad to see Samantha go.

The competition was just too tough this year.