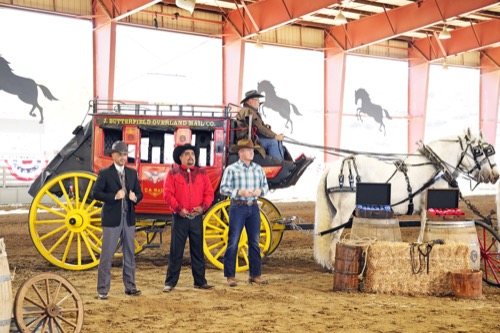 Tonight on FOX Gordon Ramsay’s Masterchef returns with an all-new episode on Wednesday, August 3, 2022, season 12 episode 10 called “Cooking for Horse Town U.S.A.,” and we have your weekly Masterchef recap below. On tonight’s Masterchef episode as per the FOX synopsis, “More than 100 cowboys and cowgirls in Horse Town, U.S.A., gather for the MASTERCHEF rodeo, where the Top 14 chefs divide into two teams to create the best steak and sides.

The team that doesn’t live up to the cowboys’ standards faces the possibility of elimination.”

In tonight’s Masterchef episode, it was another Team Challenge tonight! The contestants got to take a little trip down to the rodeo. It’s where they were told that they would be cooking for real-life cowboys and cowgirls. Most of the contestants had never been to a rodeo before. But MasterChef granted them the opportunity to watch some of the riders in action. They also got to see the judges all dressed up like cowboys. The judges love a team challenge. They love the theme of dressing as well as giving people a chance to shine in leadership. The judges named Bri and Shelly as team captains. They were at the bottom last week.

This week they got to prove why they were asked to stay. Bri was the leader of the Red Team. Shelly was the leader of the Blue Team. They both got to choose their own teams. Shelly chose most of the people she was on a team with the last time they had a Team Challenge. Bri chose her team based on people she thought could work well with. These two different sides of leadership came with moments of pitfalls and greatness. Bri was once the leader of a team during a different team challenge. Her team won that challenge. Something she wanted to replicate with her new team. Both Bri and Shelly chose strong chefs for their team

They chose them for different reasons, but they still chose the strong chefs and they both had to work against strong personalities. There should only be one voice in the kitchen. The head chef’s voice. Bri showed a reluctance to use that voice from early on. She’s normally very soft-spoken. She doesn’t really yell at people and while that can be a good thing – Bri also didn’t go around to see weak points in her kitchen. Her team chose a BBQ dish. They were each given stations to work. Dara was alone at her station. Something that Ramsay noticed and so he was the one who told her to take someone off of the coleslaw station to go help, Dara.

The teams had machines. They didn’t need two people to prepare coleslaw. The teams fed over a hundred people. They needed to save time where they could and to hold onto quality. Over on the Blue Team, Shelly ran into some problems with one of her chefs. Shelly chose to work with Christian again because she thought he would be too focused on winning to argue and that turned out to be a mistake. Christian was argumentative. He didn’t want to check the temperature of his meat. He said he got it. He claimed he didn’t need to check the temp and how it was disrespectful of Shelly to ask him to check the temp on his meat.

But eventually Shelly got him to do it. She got him to do it and she thought that would be it. She didn’t know that Christian was saying in his own confessional that Shelly should be more open to the voices in the kitchen. She should listen to people. Never mind that he did the exact opposite when he was team captain. When Christian was team captain, he picked everything. He refused to listen to anyone else. He yelled at them to get them in line. He never would have lowered himself to arguing with anyone and so he shouldn’t be shocked that Shelly doesn’t want to do it either. Shelly had a tough time with her team.

If it wasn’t Christian, it was herself being the problem. She told Brandi to add sugar to baked beans because they weren’t sweet enough and Brandi added it without tasting it first. She made them too sweet. Ramsay tasted them. He had to tell them those dishes were too sweet. Brandi felt like a fool. She felt torn between listening to Shelly and listening to Ramsay. Brandi would go on to whine about another station when she put herself on cabbage. Shelly would also go on to hold up the line as she takes forever in making her coleslaw. There were also the raw pieces of meat that Christian was delivering.

One dish got sent back it was so raw. The Blue Team was flying from one hazard to another. This is what happens when Shelly put the wrong people on the wrong stations. Like Christian shouldn’t be on the meat. The moment he refused to take the temperature of his steak should have seen him reassigned. But the worst part is that Derrick was hearing about it on the Red Team. Derrick was on the meat station for the Red Team and he at least cooked every piece of meat on his grill. Derrick also thought Shelly losing this challenge was karma because she didn’t pick him for her team. He said that had been a personal move for her. And that she deserves what she gets.

The Blue Team eventually got their game together, but was it enough? Both teams ended their service on a high and later the cowboys and cowgirls got to decide which team had the best dish. They voted. They tallied the votes and the winner was the Red Team.

The Blue Team lost. But they didn’t get to decide who to eliminate. The judges made that call instead. They ultimately chose to eliminate Shelly. She was team captain and she didn’t lead her team all that well.