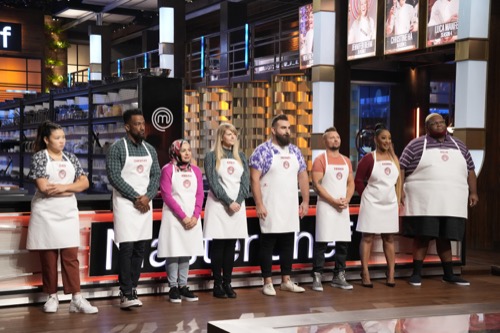 Tonight on FOX Gordon Ramsay’s Masterchef returns with an all-new episode on Wednesday, August 31, 2022, season 12 episodes 16 & 17 called “The Wall/Restaurant Takeover – Spago,” and we have your weekly Masterchef recap below. On tonight’s Masterchef episode as per the FOX synopsis, “The Top Eight chefs are paired together and tasked with communicating on opposite sides of a wall to create identical dishes with a double elimination on the line.

Then, after elimination, the Top Six must take over Chef Wolfgang Puck’s kitchen at the famous Spago restaurant in Los Angeles, CA, and uphold its renowned reputation.”

In tonight’s Masterchef recap, it’s Double Elimination tonight! Two contestants were going home tonight. The top eight faced a challenge that none of them had ever seen before and unfortunately, that challenge was the Wall. A wall was put up in the kitchen. Teams of two have to cook the same thing with a wall between them and be unable to see or taste both dishes at the same time. This challenge also meant that Emily couldn’t use her Immunity Pin to sit the challenge out. She had to partake in the challenge because they needed even numbers. Her advantage however was the fact that she got to choose the teams. Emily chose Michael to be her partner.

Emily paired Shanika with Dara, Derrick with Amanda, and Willie with Christian. She chose those teams because she thought they would fail and so everyone did their best to prove her wrong. Derrick was a very forceful personality. He chose to let Amanda take the lead because he figured he could cook anything she threw at him and Amanda also wanted to prove that she wasn’t as passive as Emily described her to be. But the judges were watching everything. They figured that Derrick/Amanda pairing was either going to be great or the worst. There was no middle ground in what they saw with those two.

The judges also thought that Emily underestimated both Willie and Christian. The two men were from the same season in which they were paired together in the past and so they knew how to cook with each other. They also had similar palettes. They were both men from the south and they brought the southern take to every dish they prepared. If anything, Emily struggled more with her own pairing. She and Michael were right away on separate pages. The judges watched as Emily began preparing her fish while Michael started cutting up his vegetables. Those two also didn’t hear each other all that well with the wall between them.

Michael kept asking Emily to repeat herself. Emily kept getting annoyed that Michael wasn’t hearing her. It was a bad combination. The others didn’t struggle as much as Emily and Michael. The two even argued about the sauce. They both strained their peas at the same time. Michael threw away the sauce in which he cooked the peas. Emily didn’t throw hers away and she wanted to use that to pour into the blender, but Michael couldn’t do so and they both had to use cream instead. Only some of the others did make critical mistakes. Derrick and Amanda both cut into their duck early. It was a little too early.

They cut into their duck with fifteen minutes to spare. Meaning all the juices in the meat will run out and it will get dry by the time they start plating. Then there were the other pairings. Shanika was a very vocal person and she too decided to let Dara lead. The judges weren’t too sure about that. They didn’t think that Shanika could truly take a step back. They also watched as Dara was floundering a bit in the kitchen. Willie and Christian on the other hand remained on the same page the whole time. They were sharing potatoes over the wall. They chose the same plate. They talked their way through every step and their dishes did look similar.

As for Emily and Michael, they got their act together. They were all over the place when it was cooking and then they started to plate. It looked like they were playing side by side. Then time was called. Willie and Christian were called up first. They prepared a Cajun Blackened Pork Chop with mashed potatoes and char salad. The first mistake was that it was on different plates. Willie had described his plate to Christian when there was a wall between them. Christian thought he got the right plate from that description when truthfully he grabbed something else. Willie’s pork chop was overcooked by at least sixty seconds.

Both dishes still looked similar. They tasted similar. Their mashed potatoes tasted like they came from the same pot and so overall it wasn’t that bad. It wasn’t bad as say Shanika and Dara. Those two had similar-looking dishes. They both tasted awful. It was a horrible dish idea and it had been all of Dara’s ideas. The judges said that it wasn’t a Michelin star. It was cooking school mistakes. They prepared a Blackened Trout with roasted corn and mushroom and salsa verde. It tasted awful and they had to wait and see how their dish compared to everyone else. Next up were Michael and Emily. They prepared Crispy Skin Salmon with a vinaigrette and pea puree.

Michael’s dish was so overpowering that it was bitter. Emily’s dish was better. Then there was Derrick and Amanda. They prepared Crispy Skin Duck with Moroccan-style couscous. The dishes all looked like they were prepared together. Chef Ramsay didn’t like the color they chose in the sauce. He felt they should have chosen something more vibrant instead of a sauce that looked like blood. It looked like the duck was bleeding. Chef Sanchez said the sauce tasted like cough syrup. The contextualization of the dish was poor according to Joe Bastianich. And so no dish was flawless. There was a mistake with everyone and everything.

But one mistake just went too far. Willie and Christian won the challenge. They were the best hands down tonight. The pairing that was eliminated tonight was Derrick and Amanda. And Amanda had only herself to blame.

Thankfully, the night wasn’t over. It was a double episode. The night had already seen a double elimination and now it was back to a regular way of life. The next challenge was a restaurant takeover. The contestants got to take over the restaurant called “Spago”. It was Wolfgang Puck’s restaurant. It was also one of the most storied restaurants in Los Angeles. It had a stellar reputation and unfortunately the contestants sort of ruined it. They ruined it during the team challenge. Christian was named captain of the Red Team. Willie was made captain of the Blue Team. They won the last challenge and that’s why they were named captains.

Christian has already acted as a captain during one team challenge. He wasn’t scared of another. Willie on the other hand had never acted as team captain, but he was a chef in real life and so he thought he could take on the challenge as well. Both teams later learned from Wolfgang how to prepare his menu. Wolfgang will also be eating at the restaurant. He therefore would taste their take on his dishes. Hearing that they would be serving Wolfgang himself had apparently been a little too much for Dara. She was a nervous wreck during the restaurant takeover. The last time she did this challenge she had been a kid and that time seems to have traumatized her.

She was still traumatized in spite of the last incident being years ago. Dara was on the Red Team with Emily. She was put in charge of plating and she actually ruined an item because she dropped it. Christian had to check on her. He said in his confessional that he didn’t want to lose the challenge because he didn’t want anyone from his team going home and so everyone had to get their act together. But the Blue Team wasn’t perfect either. Shanika was being rushed on her station of cooking the protein. She was so rushed that she pushed out undercooked scallops. Michael put it on the plate and Ramsay had to take it off the plate. And he warned them to get their act together.

Ramsay had to do something similar with the Red Team as well. They were about to put out undercooked seabass and so he threw it across the room. Just the fish. Not the plate. Ramsay was furious that they were going to serve that until he stopped them. Ramsay also had to tell both Emily and Dara that they were being too loud. The only voice in the kitchen that they should be hearing was the captain’s voice. He should be the only one yelling. Which was a problem for the Blue Team because they were hearing Christian more than they were hearing their own team captain. Willie was being so passive in the kitchen. It was hard to hear him.

The Blue Team was in so much shambles that Ramsay ultimately told them to get their act together or nominate a new team captain. Willie wasn’t ready to give up, though. He chose to stay on as team captain. He promised to start talking more. He was focused on the mission and he seems to have gained some confidence in the leadership position. Willie was getting better as Christian was getting worse. Christian began losing control of his kitchen. He started to serve raw items and his team had to stop him. Dara managed to get over her nerves to help run the kitchen and so she truly saved the day for the Red Team.

The Blue team on the other hand went downhill. Willie kept on serving raw and undercooked food. Several dishes came back to the kitchen. At one point, Shanika wondered why she didn’t just team up with Michael and fire Willie as team captain. Michael wondered the same thing. Both he and Shanika needed leadership. Which they weren’t getting from Willie. Later, the Red Team won the challenge. They managed to pull off a victory in spite of Christian and the Blue Team lost because Willie held onto power when he should have given it away. And so Willie was eliminated tonight.

Goodbye to all three contestants eliminated tonight. Hopefully, you’ll be back.