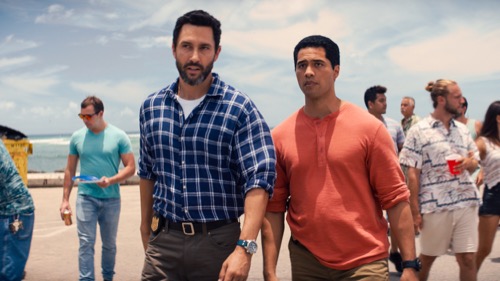 Also, Tennant is concerned Alex is hiding something from her, and Whistler is anxious about introducing Lucy to her co-workers”

In tonight’s NCIS Hawai’i episode, the body of Marine Staff Sergeant Travis Cobb was found in a salvage yard. He had been stuffed in the trunk of a car and everyone was hoping he was dead before he got put in there because the car was partially squashed. He has put it one of those machines that just pulverize it. The people operating the machine stopped it the moment they noticed that it was bleeding. That’s when they opened the trunk. They found the body. They called the authorities and it was the police who found Cobb’s dog tags with the body. And thankfully the Medical Examiner was able to piece together what really happened.

Cobb was murdered. He was shot in the face. His autopsy revealed that someone was standing right in front of him and shot him point blank in the face. But the mystery still continues. Cobb was a very private person. Some may say too private because he never discussed his private life with anyone in his unit and in spite of a bright career in the Marines – he was coming out of the military. He didn’t put in any travel paperwork to go back to the mainland. He was staying on the island. Tennant and her team were wondering if he was staying because of a woman. They looked into Cobb’s private life. He didn’t really have one.

Only his GPS does show he was making the same trip every free time he could get. Kai and Jesse went to the location to go see who lived there and it turns out Cobbs was visiting an empty airfield. The agents didn’t know what was so important about this field until they came across a street race. It was illegal to street race on the island. The racers found a loophole in that rule by racing in an abandoned airfield. The police don’t bother them there and everyone knows to stay away unless they were serious about the race. Jesse and Kai stopped one such race. They also ran into the woman they were seeking.

Lonnie was Cobbs’s girlfriend. He was leaving the military to build a life with her. He didn’t tell anyone about her because he didn’t want anyone to know he was racing and it was an open secret among the racing circle that he was with Lonnie. She gave him protection. Lonnie’s family has been racing on the island since the first automobile was brought there. Everyone knows her in that circle. But they weren’t all that welcoming of outsiders and so Lonnie protected her boyfriend. She helped him race without all the harassment that sometimes comes with it. There tend to be a lot of sore losers during a race.

The team realized that someone decided to ignore Cobbs’s protection to get at him. They looked at the car that Cobbs was found in and Ernie was able to determine where it traveled. He also determined which chop shop was most likely responsible for turning out the vehicle. The team went there with a warrant. They found a crew of guys working on several cars. They also found a bullet hole in a wall and, with the help of a very illuminating spray, the agents were able to determine that’s where Cobbs was killed. The whole shop was shut down. It was a murder scene. The men working there were all interviewed.

The team found nothing. They had to enlist the help of the FBI to help with deeper profiles of the many suspects. Tennant was also dealing with a personal crisis. Her son has begun acting out. He was failing a class that he was normally good in. He was hiding his phone whenever Tennant enters the room. Tennant talked to her ex-husband about it. He said it must be a new girl. He remembered how he was at that age and he said their son could be doing the same thing. Tennant hadn’t wanted to believe that at first. She usually gets told by her son when he has a new girlfriend. She’s usually in the loop. And she wasn’t now.

It later turned out that her son was seeing someone new. It’s why he hasn’t been focusing on school as much and why he’s being secretive. Tennant asked him why he would hide a new relationship. He couldn’t really give her an answer to that one and she was forced to drop it because of the case. The team had a suspect. They believe Lonnie’s ex-boyfriend, Sol, could be guilty. He was a serious racer. He also was reportedly jealous of any guy in Lonnie’s life. But the team spoke to Sol. He was temperamental. He loved cars and he’s moved on from Lonnie. And so the team went looking for anyone with a connection to the chop shop as well as the salvage yard.

They found a relative of Lonnie’s with a connection to both. This relative was in a vegetative state and so Lonnie was handling all of his affairs. She was also their killer. She was the only one with means, motive, and opportunity. Lonnie killed her boyfriend. Maybe he wanted to leave her. Maybe he wanted to beat her in a race. There’s just no telling and Lonnie did try to go on the run the moment she saw the feds closing in on her. And they pursued her in a car chase where they ultimately forced her off the road.

Lonnie got arrested. Justice was done for Cobbs. And Tennant realizes she couldn’t fix everything with her teenage son. He’ll come to her when he’s ready.