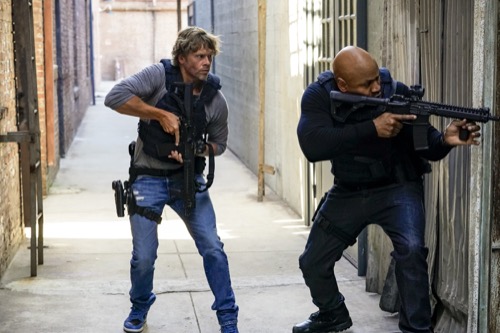 In tonight’s NCIS: Los Angeles episode, an arsonist has graduated to murder on tonight’s episode. The man he killed was identified as Michael Duncan. He was the foreman at a construction site. Global West Ventures Corp wanted to expand their buildings and so they hired Michael and Michael was supposed to lead the team to that expansion. But Michael ran into someone setting fires in the building. He tried to stop them. He got into a fight with this other man and the other guy knocked out Michael before dragging him into the center of the fire. The arsonist who did this was very familiar face to the federal government. He was Randall Perez. Perez leaves a signature burn mark at every fire he starts. And he was on several watchlists because of his crimes.

Perez was an ecoterrorist. He was wanted by one of the NCIS teams for torching the building of a navy contractor. But the team got help from the FBI with this investigation. The FBI has been pursuing Perez for years over his ecoterrorism. He loves to destroy buildings to make a political statement. The guy was so focused on his agenda that he didn’t even raise his own daughter. He ditched his daughter. He gave her to his sister and the sister hasn’t seen him since then. The daughter however has been in contact with them. Crystal just graduated high school, she has a job, and she’s ready to go to college.

But Crystal put that all at risk because she was in contact with her father. Her mom died not long after she was born and her aunt wasn’t really someone to go to for hugs. Crystal said she’s been talking to her dad. He told her why he went on the run. He explained his reasonings and he also said that was behind him now. Perez claimed he retired. His daughter wants to believe he retired. The federal agents on the case though came to suspect that there was a copycat arsonist. It would be the only way for Perez to be innocent. And if Perez was telling his family he was guilty of the other fires just not this one – he might be telling the truth.

The feds still tracked down Perez’s burner phone. Perez was wanted for other crimes. The team was able to connect his burner phone to his sister’s phone because he called her and so they followed the sister to her meet with her brother. The feds wanted to arrest both, but Perez somehow escaped again and so all they could arrest was the sister. The same sister that had lied earlier to NCIS. She told them she didn’t know where her brother was and that if she did she’d tell them. Only the truth was that Perez told her he didn’t set the latest fire. And she believed him because it was her brother and she still loves him.

The rest of the team however found Perez’s lab. They tested it. It showed the same material used in the fire that killed Michael and there was another piece of evidence. The arsonist that set that fire had caught a ride with someone. Meaning there was two people involved in Michael’s death. The team couldn’t figure out who the other person until they found the lab and they collected evidence from it. They were looking for Marco Navarro. The team initially thought he was in it with Perez and yet they had been wrong. They later found Perez hiding in one of his hiding places. They asked him about the fire and that’s when he confessed he hadn’t set that one.

Perez said a man named Marco Navarro was the one who set the fire. The two men had been friends and then Perez had to go on the run and so he left Navarro in charge of his lab. He didn’t want anyone coming across some of his stuff much less endangering themselves. But Navarro decided to pursue his own agenda with Perez’s lab. He was another ecoterrorist and he didn’t care who died. Navarro also roped in Perez’s daughter Crystal into his mess. Crystal thought she was fulfilling her father’s dream and she went on to cross lines he never did. They wanted to kill people. They weren’t done with killing people.

From that same lab, they got evidence that Navarro and Crystal wanted to kill a senator for shooting down a prominent green bill. One that would have generated a lot of jobs well as safeguarding the country from global warming. But the senator didn’t care about all of that. He didn’t care about the planet and that’s why Navarro and Crystal wanted him dead, but it was the team that stopped them. They warned the senator’s people. They went to his location. They saved the senator and they arrested the remaining ecoterrorists. Both Navarro and Crystal are going away for life and soon everyone will forget what their mission was about. And so all of this had been for nothing because all anyone will remember is that they killed people.

Admiral Kilbride later gave Callen a file about his youth. The admiral also tried to say that anything Hetty did hadn’t come from a bad place. Sure, she made mistakes, but she always worked for the betterment of good. And the Admiral wanted Callen to think about that before he makes anymore rash decisions.