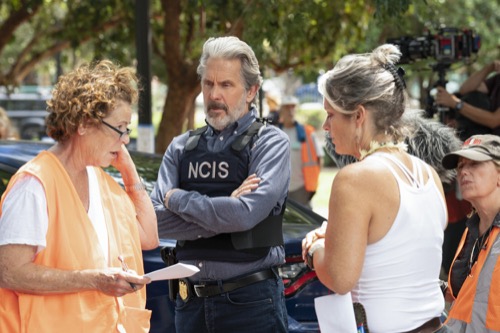 Tonight on CBS NCIS returns with an all-new Monday, September 19, 2022, season 20 episode 1 premiere called, “A Family Matter” and we have your weekly NCIS recap below. In tonight’s NCIS season 20 episode 1, “A Family Matter” as per the CBS synopsis, “With Special Agent Alden Parker on the run with Vivian, the team examines who from his past has a personal vendetta against him.”

In tonight’s NCIS episode, NCIS Special Agent Alden Parker went on the run. He had been framed for a crime he didn’t commit. He thought a terrorist was after him and his ex-wife. He went on the run, but he brought Vivian with him because he thought he was keeping her safe when the reality is she was working with someone. Vivian was in touch with a mystery person. It could be the Raven. It could be someone else. She was using a secret cell phone to contact him or her. She was also hiding this from Parker. Vivian was pretending to help Parker track down the accounting firm that set up a bogus offshore bank account in his name and she was also texting someone about where to bring Parker.

Parker eventually caught her on that secret phone. He didn’t confront her or anything. He instead let her believe she was safe and the whole time he was spying on her as she spied on him. He even got the number from the burner phone. Parker hadn’t wanted to tell the team that he suspected his ex-wife. He chose to call Kasie and ask Kasie to trace the number without telling the team. Kasie had been with Jimmy. Jimmy was the only person who knew Parker had reached out. They tracked down the number. They realized Vivian bought the burner in question. They also realized she was contacting the FBI.

Kasie sent that information to Parker. He was so glad she wasn’t working with the Raven that he was willing to forgive the fact she was betraying him to the FBI. Or that’s what they all thought. It turns out Vivian was stringing along the FBI. She was also in contact with a former FBI agent. She was reached out to Fornell. Fornell came to help. He found out about what happened to Parker and he wanted to help his old friend. Did he think Parker would attack him by accident? No! But Parker did and he had to apologize when he realized that Vivian hadn’t turned him into the authorities. And he had to apologize to Vivian as well.

Vivian told him that the FBI or better yet Special Agent Sweeney was really out to get him. Sweeney wanted Vivian to betray Parker and she would never do that and so she’s been helping Parker evade capture by giving Sweeney false information. She explained it all to Parker once he apologized. He had to apologize for suspecting she was working with the Raven. He also had to remind her that he wasn’t the same reactionary dumb guy she married years ago. Sure, he hit Fornell. It was reflex. Parker is much better now. He’s zen even. He tried to say as much to Vivian. She didn’t want to believe him.

As all of this was going down, the rest of the team was getting information on the Raven. They were trying to figure out why the Raven had made it so personal with Parker. It dawned on them that it could be connected to all the appeals. Once word goes out that Parker was a wanted man, every person he put behind bars filed for an appeal. Including Herman Maxwell. Maxwell is a hacker. Parker put him away for life. Maxwell was filing an appeal or at least that was his plan right up until he talked to NCIS. Knight and McGee went to visit Maxwell in prison. They asked him about who he was working for.

Maxwell admitted he hacked several bio labs for a Russian oligarch nicknamed “Voron”. Voron was apparently the Russian word for Raven. It seems the guy was wealthy enough to afford Maxwell’s services while also being delusional enough to become obsessed with bio labs and creating mass panic just for the sake of it. This guy was dangerous. When Maxwell heard that his old friend was the one framing Parker, he refused to help NCIS. He even canceled his appeal. He wanted to stay in prison. He felt safer in prison. He thought that Voron wanted him out because he wanted to take him out and so he didn’t want to leave prison for anything.

But the team needed answers. If the Raven wants to kill Maxwell at any cost, it means Maxwell knows more than he’s letting on and that he could be a great asset. They just had to get him talking. He shut down once he realized it was connected to Voron. The team found Parker and gave some made-up therapist background and they got him into the prison to see Maxwell. Maxwell wouldn’t talk to NCIS but he would Parker. Parker was someone Maxwell respected. He didn’t even mind that Parker was the one who arrested him. He still respected the guy and he told Parker as much as he could.

The team also went digging on the dark web. They put the name “Voron” along with biochemicals and they got a hit. They found someone from a crazy Russian gangster family. There to help was Ernie Malik. Ernie was visiting Virginia with his boss Special Agent Tennant. They were in town to meet with Director Vance only they had some time before their flight. They were willing to help with the case. Ernie remembered Maxwell from his days in the NSA. He was part of the team that gathered information on Maxwell for the FBI and so he had no problem with jumping in to help find the Raven.

Tennant agreed to do it because Torres asked her to. Torres and Tennant have this crazy filtration thing going. They were fine with being friends. It just didn’t stop them from flirting or helping each other out on covert missions.

As for Parker, he grabbed a crew to go to a location where Maxwell said they should go but it was a trap. Maxwell led them into a trap. It turns out Herman Maxwell was the Raven all along. And he ambushed the team.

Vivian was in the hospital with a gunshot wound and the FBI suspended the investigation into Parker, but Maxwell got away and the team was pursuing him.