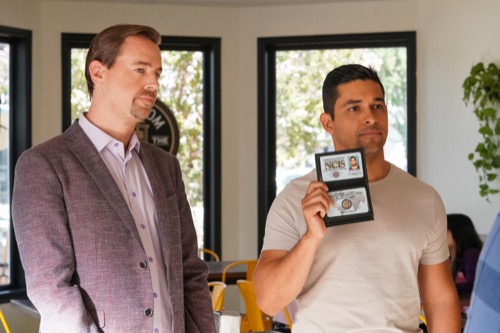 Tonight on CBS NCIS returns with an all-new Monday, September 26, 2022, season 20 episode 2 called, “Daddy Issues,”and we have your weekly NCIS recap below. In tonight’s NCIS season 20 episode 2, “Daddy Issues” as per the CBS synopsis, “McGee’s personal life and professional life intersect when a dad from his children’s school is linked to a break-in at a government storage bunker.”

In tonight’s NCIS episode, a congressional oversite committee went to go investigate a naval storage facility. They sent a representative. The representative had a naval escort. But whatever was stored there was so top secret that the naval escort wasn’t told what was inside. She opened up the building in a part of getting her own curiosity sated when both she and the representative came across a body. There was also a guy in a mask who attacked both parties before fleeing. The petty officer called NCIS. The team came along with Jimmy. Jimmy checked on the body. The rest went inside the vault to see what was being stored. And you wouldn’t believe it.

It wasn’t gold. It wasn’t oil. It wasn’t even worth protecting. The naval storage unit was being used to store barrels of cheese. The team opened up the barrels and they found cheese inside. They reported it to Director Vance. He figured out why the cheese was being stored. It turns out the government was buying a surplus of cheese as a way of subsidizing the dairy community. They wanted to keep that hidden because there was a lot of lobbying and millions involved. The government didn’t want it to get out that there were kickbacks involving cheese. And so the team was fine with keeping things discreet.

But there was the issue of the body. Jimmy was able to get a fingerprint from the body and the dead person turned out to be Tyson Perkins. Perkins was a career thief. He’s worked with all the greats. There was no telling who his accomplice was and Jimmy proved he wasn’t murdered. The guy died from a severe lactone intolerant allergy. He and his partner broke into the storage facility. Probably in the hope of securing something profitable and they ended up trapped inside. They were lucky that someone on the congressional committee came around looking. Or else the partner would have died in the vault.

The team went looking for a partner. They figured the best way to find him was to find out how the thieves got into the vault to begin with. They checked the security. It was basically unhackable. They checked the security firm and the only way that anyone could hack that was if they got the code from the creator himself. The creator was someone known to McGee. It was Carter Landergraff. Carter was a dad at the same school that McGee sends his kids. As it happens, Carter has been asking him about his job lately. He wanted all details about being a federal agent and so McGee thought Carter was trying to spy on him.

There was just one problem with that theory, though. Carter was harmless. He was a big goof. He said that his money went missing from a cryptocurrency account and that he asked his friend to help him track down the money. The friend needed his laptop. Carter thought the rest of his information was safe because he put up some kind of interior wall. Only his friend wasn’t as harmless as he thought. His friend was Kingston Reinhardt. He was a big-time gangster. He offered to help Carter find the missing cryptocurrency and he also used the information on Carter’s computer to help his nephew break into the vault.

The nephew found cheese. He got help in escaping and someone in the meantime killed Kingston. They found a mark on Kingston that proved Kingston’s heart attack was staged. He was really murdered and so whoever stole the money had also killed Kingston to cover it up. They also tried to kill Carter. Carter’s car was blown up after he accidentally activated a car bomb. Carter’s family was taken to a safe house and Carter was asked several questions about who would want him dead. It turns out the cryptocurrency wasn’t his own money. It was actually money from the school fundraiser. He was supposed to raise a half of million and he got half of that.

Carter thought putting the money in cryptocurrency would help him raise the rest. But then someone stole it and he asked his friend to track down that person and then his friend was killed. Whoever stole the money had been someone involved with that school. Carter was safe. McGee not so much. McGee finally attended one of those dad seminars and it had been a bust. The others were very judgy of him. It made McGee feel bad. He even felt sympathy towards Carter. Carter was the only other dad that was ostracized. He was a little chatty with the other dads. And the other dads found McGee too quiet.

McGee finally started talking to Carter and together they figured out their killer/thief. It was the guy working at the juice bar. Carter had used the juice bar as his office and so the barista was spying on him on the public Wi-Fi. The guy got arrested. Carter got back the money plus interest and they finally met their school goat. And Carter got a friend.

McGee decided to befriend Carter and the two grabbed drinks together once the case was over.