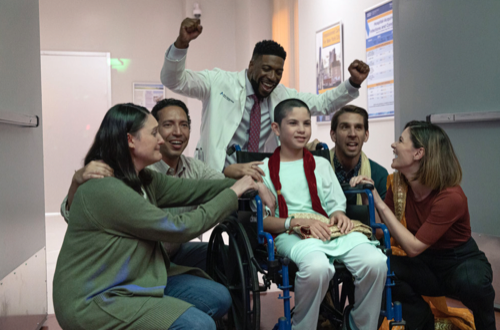 Tonight on NBC New Amsterdam airs with an all-new Tuesday, September 20, 2022, season 5 episode 1 called, “TBD,” and we have your New Amsterdam recap below. In tonight’s New Amsterdam season 5 episode 1 as per the NBC synopsis, “Bloom, Iggy, and Reynolds rally around Max as he deals with the fallout from Helen’s decision. Bloom gives extra space to Leyla but she’s in for a surprise. Reynolds and Wilder help a young terminal patient realize his dream to “star” in a Bollywood show. Iggy has a breakthrough with a challenging patient.”

In tonight’s New Amsterdam episode, Max works to get through his break up with Helen. The gang all work together, showing up at his apartment to keep his mind occupied while watching baseball, playing scrabble and more. Meanwhile, Lauren wakes up next to Floyd. He tells her she was supposed to sleep on the sofa. She has been couch hopping to help her ex with immigration and the process of getting her visa. Iggy is also working through his own problems with his ex. The pair are coparenting. Its Iggy’s turn to leave the house for 3 days while his ex stays.

Max drops Luna off at school. She asks about mom and why she isn’t here. At the hospital, Liz works to make a sick child’s dream come true. Hey wants to bee the star of a Bollywood film. Meanwhile, Lauren is overwhelmed in the ED when a bunch of sex workers arrive injured after they are attacked.

Iggy sees Max arrive at the hospital. He asks about Luna’s first day. Max tells him how she was asking why Helen wasn’t there. Max admits he doesn’t know why Helen really left, especially since in her letter to him she also doesn’t know. Iggy points out that Max neds to look deeper at his memories of them.

Iggy meets with a mom and her adult son with intellectual abilities. Her son’s doctor died recently and he has become aggressive. Iggy agrees to treat him but he has some stipulations. Across the hospital, Liz and Floyd talk about the terminally ill boy who wants to be a star in a Bollywood musical. Floyd doesn’t see how this would work. Liz tells him he has to tell the boy no then. Floyd comes back out of the room after visiting the boy and is determined to give him his dream.

Max spends the afternoon fighting with Karen about taking a donation from a company who is not in support of gay people and women’s rights. She tells him they need the money and he has to figure it out. Meanwhile, Max cannot stop thinking about Helen.

Floyd and Liz approach Max about the boy and his Bollywood dream while Lauren tries to talk to a sex worker in the ED who is angry an HIV test was run on her without her consent. Floyd, Max and Liz tell Karen about the boy and sending him to India. She says absolutely not until she meets him. Sh starts making plans. The boy codes.

Max bumps into Lauren by accident after daydreaming about Helen. He tells her he has been in his head a lot today. She vents about the sex workers. He thinks he can help.

After her son lashes out in Iggy’s office, her talks the mother into changing out her adult son’s care team. She needs to ensure he is going to be okay even when she is gone and this will help because he is reverting. He needs more.

Floyd and Liz tell the dying boy’s parents his cancer has spread and he cannot travel to India now. Iggy sits with his new adult patient without the mom and talks about his feelings. Iggy gets through to him. The patient agrees to let Iggy bee his therapist.

Max gets creative and accepts the money from the company who shames sex workers by using the money to create a clinic for sex workers. Later, Max talks to Iggy on the rooftop about Helen. He tried to help her. Iggy points out that he now needs to move on and accept that h couldn’t fix her.

Lauren discovers her ex has a girlfriend while Iggy tries to txt his feelings to his ex. He wants him back. They all meet up to attend a last ministry Bollywood party downstairs for their patient. Max notices Liz who is dancing and smiling.