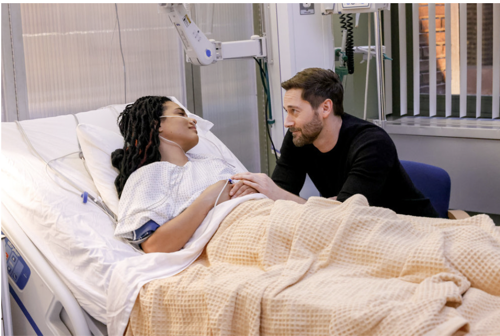 In tonight’s New Amsterdam episode, Max runs to Helen when he realizes she never went to work. He finds her on the floor of his apartment and rushes her to the ED. Iggy tries to find Trevor. Floyd looks for Mia and finds her bike. Ronnie answers the phone for Lauren who is looking for Casey. Ronnie doesn’t know where he is. They fought and he left. Lauren bumps into Leyla while on the phone. Leyla is going with her. Elizabeth is found with a head wound on the floor of her apartment.

Helen comes to. She is in pain. Max tells her a number of their drinks were spiked. His leg looks abnormal. She needs a scan. She could have clots everywhere. Max sees multiple clots. She is going to require a number of surgeries.

Iggy speaks with Trevor. He is in the hospital. Some good Samaritans helped him on the subway. Iggy asks if something happened between them. Trevor tells him nothing happened. Iggy is relieved. When he turns around he sees his husband. He doesn’t say anything other than about parent-teacher conferences and then leaves.

Floyd has Mia in the OR. Helen tells Max she wants to forgo a hysterectomy and try something less invasive. Elizabeth gets quickly checked out and then takes off. Lauren and Leyla walk the streets yelling for Casey. Leyla tells her about how her Visa will not be renewed. She needs money and is afraid to ask. Just then, they find Casey uncomfortable with a screwdriver in his neck. When they talk to him he grabs at his neck and pulls the screwdriver out. Lauren compresses it while Lelya looks for something to stitch it. She uses caulk they find in a dumpster to block the hole.

Iggy tries to talk to his husband while they head with their daughter to a parent-teacher conference. His husband doesn’t want to talk. Meanwhile, Floyd talks to his ex who just told him she is pregnant with his baby. He wants her to stay and not move with her boyfriend so they can raise their baby. She feels Floyd she is moving and plans to stay with her boyfriend. She discusses terminating the baby. He doesn’t want that.

Helen tells Max she doesn’t want a hysterectomy because she would like to have his baby. He smiles. He does too. He confesses he was going to propose and then decides now is a good time. She says yes. He heads to get the ring.

Iggy and Martin finally talk at home. Martin doesn’t think this is anything. Martin sees he has been happy. His attention has been different.

Casey is in the back of the ambulance. His BP is low. He tells Casey he knows he is not doing well. He needs to keep talking. She tells him about Lelya. Mia codes on the table. Her body temporarily is too low. Floyd decides to push a drug she is allergic to. Meanwhile, Elizabeth confronts the bartender from the night before. He admits he did it. Doctors made them all scared of COVID. They forced the country to shut down for nothing. Doctors kept their jobs but he was out of work for 18 months. The police arrive to arrest him. Elizabeth passes out.

Max returns to the hospital with the ring. Helen is in distress. She is rushed to the OR. Across the hospital, Casey is in surgery. Mia finally returns to baseline with a heartbeat after Floyd’s gutsy move.

Lauren and Leyla talk about their love and money. Lauren wants to help her but her face says difficult when Leyla hugs her with joy. Helen has the clot in her lung removed with Max at her bedside. She is stable.

Elizabeth wakes in the hospital. She is upset. Healthcare workers were once heroes and now they are the enemies.

Floyd tells his ex he wants to be a good dad someday and wants to be in their life but he could see his child having a good life with her and her boyfriend. They are both good people. He can be better too. They can all be supportive of one another. She cries.

Later, Elizabeth wears her scrubs home with pride. Casey wakes Lauren at his bedside. Iggy sees his family all solemn at family dinner. Helen wakes Max. He puts the ring on her finger. She cries and then realizes she cannot speak. Max screams for help.