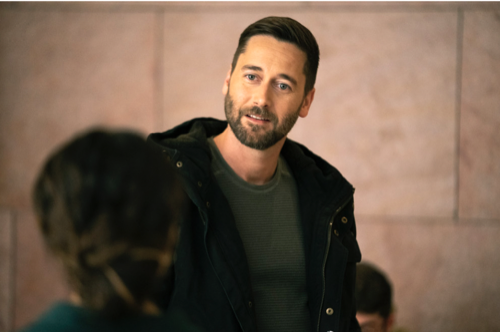 Iggy helps two patients deal with a breakup, which forces him to consider his own marriage. Bloom and Dr. Castries reach an understanding.”

In tonight’s New Amsterdam episode, Sharpe was practicing her motor skills at home. She can now make breakfast again. Her speech was progressing much slower. She was recovering from a stroke after all and so she needed time to gain achievements. But Sharpe is impatient. She wanted to get better now rather than later. She wanted her family to be the way it was and she was dreaming about returning to London. London is home for her.

Max also got a job as a subcontractor at the hospital. It helped with the medical bills. It also got a voice on the board and he wanted to use that to face off against Veronica. Veronica was a major problem. She was even targeting people with predatory medical bills. Max found out about them. He wanted to use that to take her down. He said as much to Reynolds. So, Reynolds offered to help. It turns out Veronica had been overcharging people and then threatening them with the civil court if they didn’t pay the ridiculous charges. The board needed to know about this. Max was warned that the board likes money even if it’s dirty money.

Yet, Max pointed out that they wouldn’t want to lose their stellar reputation if it gets out. He thinks a few leaks to the media or the threat of leaking it to the media will be enough for the board to oust Veronica. Max came up with fliers. He started giving it out to any and everyone in front of the hospital.

It told people before they went in that a band-aide was going to cost somewhere in the hundreds. The media got wind of the story. They began interviewing people who had been overcharged. Eleven of them to be precise and so this story was getting out there and the board wasn’t going to allow anyone to tarnish the hospital’s prestige.

Iggy meanwhile was dealing with the fallout of two infidelities. One, was his own. His husband accused him of having an emotional affair and leaving himself open to be roofied. He hasn’t been talking to Iggy since. Iggy was getting desperate. He wanted to go to marriage counseling. But they unfortunately knew all the good doctors in the city and so Iggy suggested leaving the borrow to get help. It would be a forty minute drive only it would be worth it if it can save their marriage. His husband said sure except Iggy could tell he wasn’t thinking about it all that much while Iggy was obsessing over it.

Iggy wanted to make his marriage work. He was feeling a little sad about his chances of doing so when one of the younger kids in the psych ward got upset at another kid. The kid that got upset was a girl. She was dating her boyfriend in the group when they kissed. She wasn’t sure how she felt about it because she processes emotions differently and so she went on to kiss every other boy in the group. This got back to her boyfriend who dumped her. the girl then flipped. She tried to beat her ex up and Iggy had to intervene. He told her what she did was wrong. He also told her that she hurt the poor teenager when she cheated on him.

Iggy agreed to act as a councilor for the two exes. He got them both to apologize and appreciate each other, but then later the girl broke up with the guy. She only wanted him back because she wanted to be the one to break up with him and not him with her. It was very frustrating on Iggy’s end. Iggy ended up speaking to Juliet again. She said she dumped Isaac because things weren’t the same when they got back together. He was pushing her away. She felt like he was going to dump her again and so she wanted to be the one to win. She broke up with him before he could break up with her. And that’s something Iggy understands.

Iggy feared he was going to be dumped. He tried to hide his emotions as best as he could and he later went to their couple counseling alone. He went without his husband because he thought he needed to do work on himself first. But Max’s bid to oust Veronica hadn’t worked. She managed to turn things around and she even offered to buy out the contractors that Max was working with. And what Veronica didn’t know was that was part of Max’s plan all along.

The subcontractor’s division was going to be his Trojan horse.

And Bloom learned from a new patient that what she loves the most could be killing her. So, she took time off and enjoyed a session with the Alternative Medicine Department.