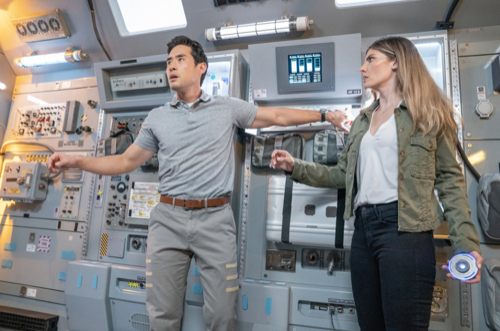 Tonight on NBC Quantum Leap premieres with an all-new Monday, September 26, 2022, season 1 episode 2 called, “Atlantis,” and we have your weekly Quantum Leap recap below. In tonight’s Quantum Leap season 2 episode 2, “Atlantis,” as per the NBC synopsis, “Ben finds himself headed into orbit aboard the Space Shuttle Atlantis in 1995. Addison confides to Ian about discovery and finds herself at odds with Magic and Jenn.”

In tonight’s Quantum Leap episode, Magic visits Beth. He is sorry he hasn’t visited. She understands, she knows he is busy. He is looking for Janice but Beth has not seen her. So much has happened. Meanwhile, Jenn sees Ian take a drive from someone. Jenn confronts Ian who says, mum. Jenn points out that they need to be a team.

Ben and Addison talk. He hates how he is being kept in the dark. Addison isn’t saying much so Ben changes the conversion to her and the engagement ring she is wearing. Just then, they learn how David died. They can fix this with a leap but it won’t be easy. Ben will need to fix and release an accelerator in space.

Jenn and Magic discover Beth called Janice. They can track it and find Janice. Ben works in space to release the accelerator. When he gets hit by Debra however, it changes things. Now the crew of the ship could die.

Jenn tells Magic he needs to cut Addison some slack. She didn’t choose to be a hologram. Meanwhile, Addison questions Ian about the drive while Jenn and Magic arrive at Janice’s address.

Ben and Addison discuss what they should do with the crew who argues that their ship is now damaged from the debris and they need to save themselves. Jenn and Magic don’t find Janice but they do find a secret trap door on the floor.

Ben struggles to get the crew on the same page. Addison pushes Ben to get them to agree on a plan. He manages to get the captain to see that his right hand has a solid plan and aborting would be bad. Ben also wants to help.

Jenn and Magic go through Janice’s house to steal computer drives. Meanwhile, the crew decides they need to reach out to Russia for help. Ben helps them. Addison and Ben share a moment, she does trust him even if others don’t.

Janice calls Magic. She knows what he is up to. He better leave her house, she has taken precautions. Magic presses her on information about Ben but she won’t share anything.

The Russians cannot see the ship and so they are not answering. Ben has a plan. He is going to actually knock on their door. Addison yells for him not to but it’s too late. He is flying through space. He knocks right on the door of the Russians and ultimate save the crew. They all go on to do great things.

Ben and Addison talk. He cannot wait to get home. Will it be soon? Addison tells them they will keep trying. Later, Magic apologizes to Addison for everything and fills her in on what happened with Janice.

Addison shares that she has a thumb drive of Ben’s. She found it in her apartment. Ian uploads it. There is a lot of data. Millions of variables represent millions of places in time. Addison notices a certain location. Ian thinks Ben was looking to get to a specific time and location.

Ben is in a boxing ring. He gets punched right in the face.