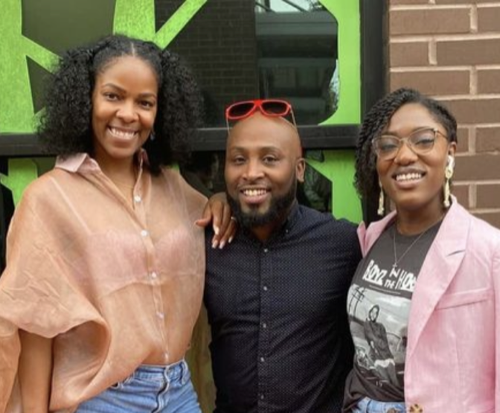 The Joneses have a potential sister wife, but the distance between them is worrisome. Nick Davis brings home a surprise.”

Tonight’s Seeking Sister Wife episode begins with the Epps family in Orlando, Florida, Taryn, Marcus and India. Taryn and India are planning the date for Marcus and Vena. India admits the thought of Marcus dating does make her cringe a little. Taryn is worried it might change the dynamic of the three of them and she doesn’t want that to happen. She remembers at one time she told Marcus that he would have to give up India, but it worked out in the end. India says that when she first connected with Marcus his grandmother passed away and she feel tthat is what contributed to their strong bond in the beginning.

The Merrifield family, Los Angeles, California, Daniele and Garrick. Garrick has a video call with Roberta, and she is crying. Lea gives him a hug when he is finished the call. The call with Roberta was very emotional. They are in the kitchen and Lea is trying to see if there is any chemistry with him, and she does. She finds he is respectful and not gropy, and she appreciate that. Lea is excited to see where things will go, maybe they can sneak a kiss later. Lea and Daniele talk, she says the boundary is no sex. Daniele finds that Lea’s personality is bold and that can be a problem some times.

The Jones family, Portland, Oregon, Sidian and Tosha. They are out walking the dogs with the kids. They are looking for their new sister wife. They have had a hard time finding a sister wife but they are not giving up. They want to find someone that meshes well with them and the kids. Arielle is from the Phillipeans, she is a beauty pageant winner. Arielle met her through work and she really adores her as a person. Sidian thinks Arielle is perfect for them. It’s hard for them to date long distance because it is a lot harder to communicate. During video chats the videos break a lot. Sidian and Arielle have not met yet in person, it failed twice and he hopes she doesn’t give up. She comes from a conservative background and he is worried that her family would not be happy about her getting into a polygamist marriage.

The Davis Family, Auroro, CO, April, Nick and Jennifer. Nick’s first solo date with Danielle went great, they had sex after their date and slept in. Nick admits he didn’t think she would be comfortable coming back home with him. Now, he is more worried how this affected April and Jennifer. Nick says he doesn’t take just his own desires into consideration, this arrangement has to work for everyone.

Back to the Epps family, Vena lives in Charlotte, NC, Marcus is excited that she let him fly her out to be with him. It’s been a long time since he has been on a formal date so he is nervous. At first she thought his polygamous relationship was a joke, but now she realizes that it is real. Taryn ad India set up a whole picnic for the two. She asks him how many wives he expects to have, he says three is a charm. He says sometimes the wives bump heads, India feels a lot of times that is them against her. Sometimes India feels left out, Marcus is worried that Vena might make that worst.

Marcus tells Vena that he is seriously interested in her. He is ready for his wives to start spending time with her. Marcus is on his way back from his date, the wives are both anxious to find out how it went. Marcus comes home and says the date was great, Vena loved how they contributed to the date. He invited her over to meet them before she leaves. He asks them where in this process does the sex happen. Taryn wants to be informed when he is ready for that step. She feels like they all have to have chemistry with Vena before it gets to a physical level.

Back to the Merrifield family, the three sit down for dinner. Lea speaks her mind and Daniele says she is the same. Garrick tells Lea that he is happy that she is there. Lea asks about the house, how would things work. Then Lea says she works in a hospital 10-12 hours and she doesn’t think she should have to come home and cook and clean. Garrick tells her that 12 hours is a long time to be away from the family. This is a red flag for the relationship. After the dinner, Garick starts to become hesitant.