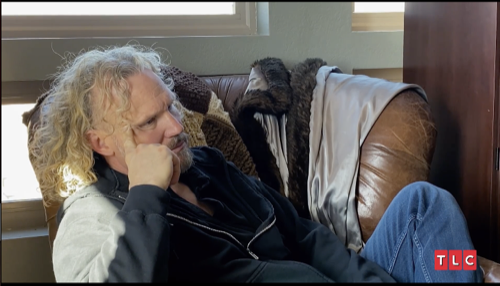 TLC’s reality show about a polygamist family Sister Wives returns tonight with an all-new Sunday, September 18, 2022, season 17 episode 2 called “Is There a Favorite Wife?,” and we have your weekly Sister Wives recap below. On tonight’s Sister Wives season 17 episode 1 as per the TLC synopsis, “While Janelle’s household fights through COVID-19, Ysabel has exciting news about her future. Then, Christine reveals her plans to move to Salt Lake City with Truely as Kody struggles to let go.”

In tonight’s Sister Wives episode, Kody has favorites. If he didn’t have favorites, he would never have shunned his other wives. Meri explored a relationship with someone else because Kody had stopped sleeping with her and she was lonely. She was going through empty nest syndrome. She wanted someone to love her back and unfortunately, she got catfished. But now Meri is so desperate to get back into Kody’s good books that she’s ignoring his problematic behavior. He pushed her away first. He did that with her and he also did that with poor Christine. Christine went months without any kind of partnership with him before she called it quits.

Kody stopped sleeping with her. He also stopped engaging with her to the point he barely spent any time at her house. Which is what he did with Meri and so he knew what he was doing with Christine. He knew what it could lead to. Yet, he did it anyways. Kody wanted to push Christine out of the relationship. His master plan worked. Christine is out. She’s gone and now he no longer has to feel guilty about the bare minimum amount of time he gets to spend at her house. Kody would go over to her house to see the kids. He spends about an hour there. Most of which was spent on his phone and that was it. He goes off again.

After Christine left him, her youngest daughter didn’t even notice a difference. That’s how little attention she gets. Christine doesn’t have to wonder where Kody is because everyone knows where he is. Kody is with Robyn. Robyn is his favorite wife. She tries to deny it and she’s fooling no one. Robyn likes to claim that Kody isn’t spending most of his time at her house. She said she even had to hire a nanny because she needed help with her younger children that she wasn’t getting from Kody. Mind you, this was the same nanny that literally left them open to covid because she caught it. The nanny was still in the picture and that’s saying much.

Kody got upset with Janelle because he didn’t feel like her kids were following his covid rules enough. He tried to push Janelle into kicking out two of their sons and she told him to go to hell. It doesn’t matter that Janelle is now dealing with covid. If Kody was willing to kick out his own sons, why is the nanny still allowed to come around? The woman had covid. She wasn’t following his “rules. Only it doesn’t matter what she does. She’s still hired and that’s due to Robyn being the favorite wife. The only person who doesn’t see that is Robyn. Christine sees it. Her children see it and that’s part of the reason why she’s leaving.

Christine is just done with the marriage. She would have left him back in Las Vegas if she knew what moving to Flagstaff would entail and she said as much to him when he surprised her by coming over. Kody had wanted to talk. He wanted it to be away from the kids and so just the two of them went to a certain part of the house to talk. Kody made some references about missing her. He said he wasn’t sure if he could let go. Christine on the other hand didn’t have that problem. She had to be alone during Ysabel’s surgery because Kody couldn’t find the time to support his daughter. And Christine realized that she could do this alone.

When it was just her answering the doctor or getting information on her daughter’s surgery, she realized that she didn’t need Kody. She spent too many years being with him because of the fear of being alone and the reality proved that she was just fine. She feels happier. She’s going to get even happier when she takes her youngest child and they move back to Utah. Christine’s family is in Utah. It’s where her older children made their families. Christine wants to join them. She never liked the idea of coming to Flagstaff. She’s also tired of being uprooting every couple of years because Kody is a wanderer at heart. It’s tiresome. It’s not great for the kids.

The kids actually hate it. They want to stay with their friends, their family, and their activities. No one likes being moved every couple of years and the wives have all complained about it. The kids haven’t really gotten the chance to adjust to Flagstaff because they moved right before the pandemic. Christine wants to take her youngest child with her to Utah. She knows that Truely would be surrounded by the love there. Kody can make the drive to visit. He could possibly learn to spend some quality time with Christine’s children instead of playing with his phone. And he can’t really fight Christine’s decision about that.

Kody wanted to, but then he remembered the courts heavily favor the mother. He hated the idea of Christine moving and taking Truely with her and so he tried coming up with alternatives. Christine wanted to move to the Salt Lake area. Kody tried to convince her to move to St. George. Her idea is eight hours away. His idea is much closer. Christine still turned it down. She wanted to go back to where her family was. There was nothing Kody could do to stop it and it’s not like he was spending quality time with Truely anyways. And Kody wasn’t worrying about losing time with Truly, he was concerned about Janelle’s kids.

Janelle’s sons Gabe and Garrison are done with Kody. They see his favoritism. They see how Robyn comes first and that Kody isn’t too concerned about his covid rules when it’s Robyn is involved. And so they called their father a hypocrite.

He deserved it and he and Robyn are the only ones who don’t see how true that is. But in some good news, Ysabel got into college in North Carolina. She was going to move in with her older sister Maddie and her family while she goes to school. The school also wasn’t that expensive. The family didn’t have to worry about financing it. And Kody was so happy about that, he didn’t mind she was moving to the other end of the country.