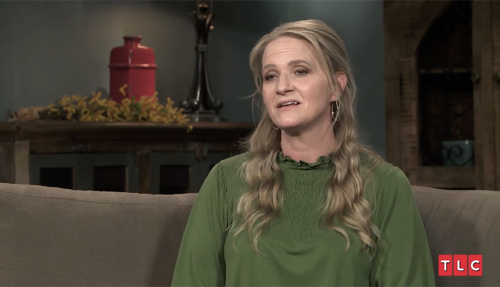 TLC’s reality show about a polygamist family Sister Wives returns tonight with an all-new Sunday, October 2, 2022, season 17 episode 4 called “And Then There Were Three,” and we have your weekly Sister Wives recap below. In tonight’s Sister Wives season 17 episode 4 as per the TLC synopsis, “Janelle makes a major decision about her living situation without telling Kody. The family disagrees about the kids returning back to school. Then, Christine gathers her sister wives to reveal that she’s divorcing Kody.”

In tonight’s Sister Wives episode, Christine was back home again. She just arrived back from Utah. She went to Utah to be with her daughter, Mykelti. Mykelti wanted her mother to be there when she had her baby and now the baby is born. The baby is a healthy girl. She looks exactly like Christine’s son-in-law, Tony. The baby was just a female version of him. Both Tony and Mykelti were also doing well with the baby. They both loved her so much that neither wanted to put her down or share her with Christine and Tony even felt jealous that Mykelti was nursing because he wanted to spend more time with the baby. Christine was glad to see his involvement. She was glad to see her daughter so happy and now she’s glad to be home.

Christine was back in Flagstaff with all of its problems. Her marriage with Kody was over. There’s no doubt about that. He was fine with maybe sleeping with her twice a year and having a complete breakdown of intimacy, but Christine realized she deserved more. She wants more. She wants a husband who can be there for her. Someone who will support her. Someone who will love her. Someone who doesn’t play favorites among his wives. She didn’t get that with Kody and so she’s going to try again. Christine is very hopeful about her future. She couldn’t wait to move back to Utah and its just Kody that’s holding up the move.

Kody doesn’t want Christine to move back to Utah with their daughter Truely. Truely is still young. He doesn’t want to miss his time with her and he’s worried about how she’ll take her new life. Only Christine has been set on divorce for a while now. Truely hasn’t noticed the difference. She’s still spending as much time with her dad as she was before. He comes over for an hour, spends it mostly on his phone, and then he leaves. Truely hasn’t noticed a difference in his behavior. She was fine and so it was just Kody who thought he had more of an impact on her life. Kody later had a group Zoom meeting with the wives. He included Christine in this.

They all went over what would happen once the kids go back to school. Where they are, the school was now asking them to come in if they want and Kody had asked Robyn’s daughter not to go, but he didn’t ask for the same from Christine’s daughter. Christine still tried to get a firm opinion on what he wanted Ysabel to do. He said he doesn’t have one and that was that. Kody said that Christine doesn’t think he spends enough time with her kids anyway and so what does it matter if Ysabel goes back to school. He completely missed the point Christine was trying to make. Christine was trying to get him to invest in Ysabel’s life and he just let that moment fly on by.

Then there was Janelle. Janelle couldn’t stay in her rental property anymore. The landlord was putting it up for sale and Janelle didn’t want to buy it because the mortgage would trap her to the point she might not have enough to build on the new house. So, Janelle decided to get an RV. Janelle has always loved RVs. She loves camping. She loves the wilderness. Janelle’s older sons are going to find their own apartment and that meant it would just be her and Savanah moving into the RV. Janelle asked Kody if he was going to live in with her. He said he would. He also said that being on the RV would help motivate them to build on the property.

Everyone else in the family thought Janelle was nuts for moving into an RV. Nevertheless, she was happy. She bought her RV sight unseen. It was the only one they had on the property and so she had to take it. She was glad to finally be moving on the property. She couldn’t wait to put a toilet it as well as a firepit. Janelle’s news however was a bit overshadowed by Christine’s news. Christine finally broke it to her sister wives that she was leaving Kody. She told them about her plans on moving back to Utah and she offered up her house to Flagstaff to Janelle.

Janelle needed a place. An RV was a great idea. It just wouldn’t last for long and so Christine felt the need to move in part because she knows that Janelle needs a place to stay. She offered up her house to Janelle. She told the rest of the family that her leaving is a done deal. She was moving with Truely. The rest of the sister wives reacted with shock. No one wanted her to go. They especially didn’t want her to move to Utah. They would miss her. they would miss Truely. Kody said that Christine wasn’t taking Truely from the family. He said that they would have a 50/50 split and that Truely would be traveling back and forth.

Which sounded ridiculous to Christine. She said in her confessional that he could have that split this whole time and he never wanted it. She thought it was ridiculous that he was pretending to be interested in Truely now.

And everyone thought it was sad when Kody reiterated that he’s the man of this family. He’ll lead them into a new normal.