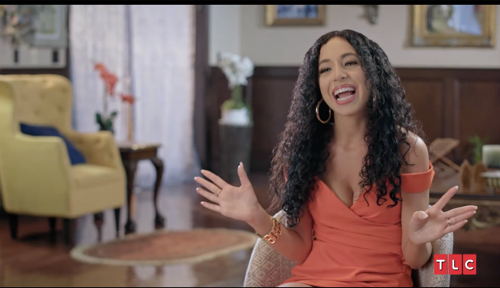 Tonight the TLC  series a fresh twist on family sMothered airs with an all-new Monday, October 3, 2022, season 4 episode 8 and we have your sMothered recap below. In tonight’s sMothered season 4 episode 8  titled, “The Hard Truth,” as per the TLC synopsis, “When Lauren goes into labor, Lisa stays right by her side, much to Laura Leigh’s dismay. Cher keeps a big secret from Dawn that could change their future. Shay and Angie have a painful argument. Sunhe gives Jason a serious ultimatum.”

In tonight’s sMothered episode, Sunhe and Angelica get in the bathtub together while drinking a cocktail. Bathing together is a spiritual connector for them. They don’t think it’s a big deal to share bathwater. Angelica reveals how Jason wants Sunhe to move out so they can live a better life. Sunhe tells her that they should get an apartment with Angelica’s daughter. Angelica wants to work this out. She doesn’t want to move.

Laura Leigh, Lauren, and the parents try to put a stroller together while discussing the baby shower. Lisa bites her tongue at Kenny. Laura reveals how Laura Leigh organized a drag show. Lisa thinks the shower was ruined. They then get into what they should do after the baby is born. Lisa wants them to come to her house. They tell her she can come to their house after they settle in. Laura Leigh wants them as parents to have time to themselves. Lisa doesn’t like these boundaries.

Cher and Dawn are having a special family party. They want to match so they visit their friend Kathy who tailors all of their clothes. They share with Kathy how Jarod’s stepmom Sherry pushed Dawn into the pool. Kathy is silent at first and then tells Dawn she needs to talk with Sherry. Cher feels the same but she doesn’t say too much.

Shay hangs out with her friend Bridgette. She needs a break from her parents. They sit in the blow-up hot tub Shay’s dad bought. She would be sitting with her mom but they haven’t been getting along.

Shay vents about fighting with her mom. She needs to move out eventually. She knows her mom isn’t going to like this. Just then, Angie comes out to talk to them. Shay shares how Brigette is buying a house. Angie shares how Shay used to swim nonstop in their pool in their first house. Angie refers to Chase as a child. This makes Shay mad. Angie tries to explain that she once had a son and now she has a daughter with a difficult personality and that is reality. It’s not good or bad. Shay gets even more irritated when Angie says she mourns who she was. Angie asks the camera person to take a break. Shay takes off on a walk. She cannot take it anymore.

Shay goes back to talk to her mom. Angie explains her feelings. Shay sits and cries and doesn’t say too much. Meanwhile, Laura Leigh and Lauren are headed to the hospital. The baby is on the way. Lauren tells her mom to come later but Lisa shows up right away. They prep Lauren for a c-section. After, the family all take turns holding the baby, Reagan.

Later, when they are ready to go home Lisa has to come and get them because she has the car seat. Laura Leigh finds this way too convenient.

Angelica has Jason and her mom meet for dinner. She wants them all to reach common ground. Jason shares during dinner that he doesn’t know what to do with Sunhe living with them. His relationship with Angelica is difficult. Sunhe shares how she has spoken with her daughter and they may leave Jason behind. Angelica doesn’t object to this, upsetting Jason.