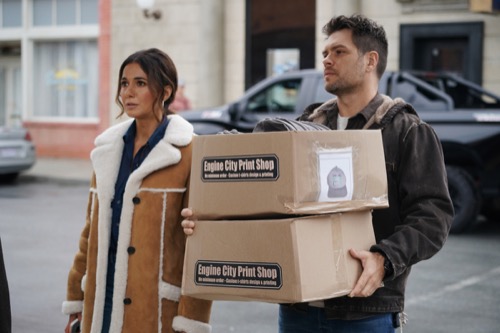 Tonight on the CW the series Superman & Lois airs with an all-new Tuesday, January 18, 2022, season 2 episode 2 and we have your Superman & Lois recap below. In tonight’s  Superman & Lois season, 2 episode 2 called, “The Ties That Bind,” as or the CW synopsis, “Clark opens up to Lois about his ongoing struggle with visions and admits that there is only one person who might be able to help.

In tonights Superman & Lois episode, Lois makes John and his daughter Natalie breakfast. They are staying on the farm. They all wake to eggs. John’s daughter Natalie tells Lois she is a vegan. Clark suddenly falls to the ground. He confesses he has been having visions. Clark tells Lois he sees rocks crumbling and hears screaming. Lois tries to figure out what he is seeing and what is happening. They both wonder of Jordan will have the same visions too.

Lana and Kyle set up for Daniel in town. He is having a special get together at the diner. They run into George who is snarky about having competition in the race. At school, Sarah is still acting standoffish to Jordan. They meet for lunch in the cafeteria. Natalie sits with them. Natalie and Sarah click right away.

At the Gazette, Lois learns an old piece she wrote about a woman has resurfaced. Lois’ editor asks her if she cohersed any of her sources. Lois is insulted and angry. She vetted all of them and her story was about a cult leader who was ultimately a murderer.

Superman comes faces to face with Edge. He wants to learn more about his visions. Meanwhile, Lois and her editor head to speak with a doctor about a recent earthquake and a company who she works for that is mining for kryptonite. She is very evasive about the tremors and the kryptonite.

Daniel tells Lana he is dropping out of the race. He got a job offer that is better for his family. Meanwhile, Lois asks John to help her figure out what the earthquake happened and how she thinks it has to do with the mines. He will help but he cant get in too deep because of Natalie. Clark arrives and reveals he talked to Edge. He isn’t giving up much. Clark hears something and takes off. He arrives at a hanger to see a man shooting at several officers with people hiding behind cars. Superman fights him but realizes he is just as strong. Later, Anderson calls Superman more of a liability than an asset.

Lois finds John at the mines. Her is already looking into things. Meanwhile, Lana vents to Kyle about Daniel dropping out. At school, Jonathan watches his team mate’s work out and cheer each other on. Clark talks with Jordan about the visions. He wants to talk to Edge more. Jordan wants to help. They take Edge in handcuffs to his fortress. Superman meets his mother and his shocked. Edge is angry to see her. Superman discusses his visions. Sh offers her help.

Sarah and Natalie work on the car she and Kyle have been trying to fix. They talk about Jordan. Sarah confesses she has a secret. Natalie tells her she needs to figure things out. Sarah agrees. Natalie gets the car started.

Lois and John enjoy coffee in his RV at the mines when they feel rumbling. Its another earthquake. Inside the fortress, Superman falls to the ground as he sees visions. Edge snaps his cuffs off. He attempts to get close to Superman as he is down and weak. Jordan steps in front of him and uses his heat vision. They fight. Edge overpowers him until his mother begs him to stop, to be better. Meanwhile, inside the mines is a monster. Outside, John realizes it is much more than an earthquake. Something strange is in there. Superman regains his strength and attacks Edge. His mother yells for him to stop.

Superman brings Edge back to his cell. Their mother sees good in Edge. Superman confesses he doesn’t but hopes he is wrong. Meanwhile, Lois learns that her sources from an old story has come forward and said they lied. One of the sources was Lucy, her sister. Lucy was in deep and almost died from listening to this cult leader. Lois swears by her sources and her sister.

Kyle comes home. He has signatures for Lana to run for mayor. She confesses she is ready to run and already started the paperwork. Back at the farm, Jonathan tells Jordan about his day and their teammate benching a lot of weight. Natalie comes in. Sarah is here to visit. He meets her on the porch. She did something wrong, she tells him. She kissed someone at camp, a girl named Aubrey. It just happened. He is hurt. He doesn’t want to talk. She tries to get him to stop but he heads inside.

Clark and John sit with Lois. They talk about the tremors. Something is definitely in the mines and it isn’t from an earthquake.