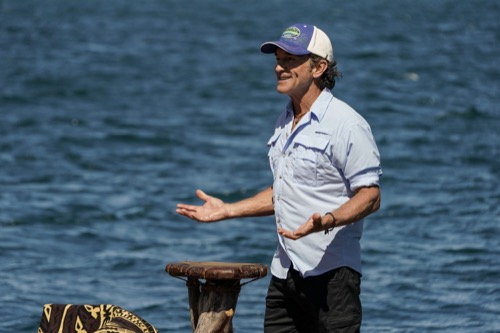 Tonight on CBS Survivor airs with an all-new Wednesday, October 5, 2022, season 43 episode 3 and we have your Survivor recap below. In tonight’s Survivor season, 43 episode 3 called “I’ll Sign The Divorce Papers,” as per the CBS synopsis, “The Beware Advantage returns and castaways must decide if they want to risk losing their vote.

Also, the trust in one tribe shifts after a castaway finds out that a few tribemates have been snooping through bags around camp.”

Tonight’s Survivor episode begins with Jesse who feels best with Nneka and Cody. It puts Dwight and Noelle on the bottom but if Dwight doesn’t want to get on board, he will have to go next, Jesse will sign the divorce papers.

Dwight woke up to the way Jesse is playing. Noelle also says that Tribal Council was a wake-up call. It’s a new day, and she is going to do what she can to get her feet in this game.

At Baka, Gabler slept on the beach. He is really struggling and is deteriorating over the last few days. Sadly, he is putting a target on his back. Elie is going to make Stabler think his idol is dad.

Gabler finds out that Elie is a double agent and was going through his bag. He says the fact that she is underestimating him is great. Gabler sets up Elie, he tells her that his idol is no longer active and he wants to bring it home to his daughter for her graduation.

There is a birthday at Coco, they are enjoying some for James’ birthday. He wants to go off a look for an idol and Lindsay reminds him how risky it is to go off on his own.

Karla found the Beware advantage and put it back. She returns to camp and asks James his opinion, if he found it would he open it? Then she comes to the decision on her own, she returns and opens it up. It is the same bead challenge, she has to get all her tribe’s beads from their backpacks. If she doesn’t do it by Tribal Council, she loses her vote. She starts with James, who says she wants to make a necklace for her wife. Geo is tougher, but she wins him over by trading with him. She can’t be too pushy though, but she trades her earrings for more beads. She is one bead away, she has to work on Ryan. She trades him a turquoise bead for his girlfriend and she gets her last bead.

Time for the Immunity challenge. One person from each tribe will leap off a tall tower into the ocean, then they are going to climb a stack of crates and dive into the water to retrieve a key. Then the next person goes, after they have retrieved all three keys, the two remaining tribe members will use those keys to unlock the pieces to a turtle puzzle. The first two tribes to finish win immunity and reward, the first tribe to finish wins a large Survivor tool kit and a lot of fruit, and the second tribe to finish, a smaller toolkit and less fruit. The last tribe to finish will be going to Tribal Council and Jeff will take their flint.

Vesi was in the lead and doing well, but they lost it to Baka who came in first and then to Coco who came in second. Vesi is going to Tribal Council, what a comeback for Baka and Coco.

The boat arrives, Noelle, James, and Owen get in and leave.

Losing the second tribal in a row, it is now about strength moving forward, and who can win challenges.

Cody says it is crunch time, they are in dead last. Nneka has put a target on her back, she wanted to do the puzzles and she failed again. The two names on the table are Nneka and Noelle, Jesse wants to keep Nneka because she reminds him of his mom.

The three that were dropped off at another island have to take a walk in a jungle and make their way to the lookout and get to know each other along the way because when they reach the top, they will have to make a group decision.

The guys agree to let Noelle RISK and they don’t risk, so she has a chance to get an advantage. Noelle makes an alliance with them and says loyalty.

Noelle returns to camp and tells everyone that she did not risk her vote, she lied. Later, she confides in Dwight that she did risk it and she got the STEAL A VOTE.

At Tribal Council, Jeff talks about Nneka doing the puzzle and the pieces stopping moving. Jesse says it is a different setting from doing a puzzle at home, they are not working at their best and everyone is yelling at them. Jeff asks Dwight if he is confident, he says yes, and so are the rest. Time to vote, Noelle is first.

Jeff tallies the votes, the first vote for Noelle, then Nneka, Nneka, Nneka. The third person voted out of Survivor is Nneka.