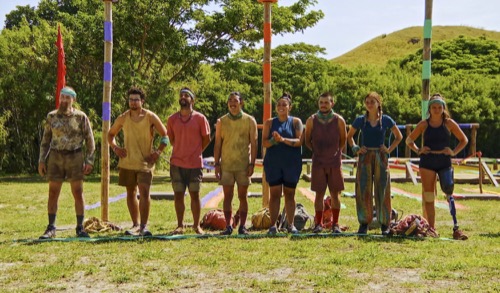 Tonight on CBS Survivor airs with an all-new Wednesday, November 23, 2022, season 43 episode 10 and we have your Survivor recap below. In tonight’s Survivor season, 43 episode 10 called “Get That Money, Baby,” as per the CBS synopsis, “The remaining eight castaways compete in a reward challenge that will earn them a night in the sanctuary and a letter from home.

Also, one castaway will have to build their house of cards high enough to win immunity.”

Tonight’s Survivor episode begins with night 17, at tribal they were split into two groups of five. Sami told Karla very last minute what the vote out and she is frustrated because she wasn’t included earlier. James and Ryan were sent packing. Jesse feels good coming out of his tribal and they other tribal. After the two tribals there is a lot of distrust amongst the tribe.

The next day, for the reward challenge they are going to spin inside a metal frame, slowing dragging a buoy beside them. Once it cross the line, they are going to cross a series of obstacles to retrieve a sand bag. They will then race, a through that sandbag on top of a tall tower. First person to do so will win reward, he winner will go to the sanctuary, enjoy pizza, cheesecake, brownies, bear wine. Spend the night there with pillows and blankets. Noelle has down an amazing job so far but passing balance beam proves difficult, she is not giving up, everyone else is tossing up their sand bags. Noelle does it, she is back in the game. Noelle does it in one of the biggest comebacks ever in Survivor. Jeff has seen a lot of things in 43 seasons, but this is one of the most amazing.

Noelle has earned an afternoon and evening at the sanctuary and she will get a letter from home. She has a big decision, to choose someone to go with her, she chooses Sami. One more, Jesse. One last person, Owen. Gabler, Karla, Cody and Cassidy go back to camp.

At the sanctuary, everyone is truly grateful. First they eat, then they all open their letters from home. Opening the envelope hit Owen like a freight train, he go them from his mom, dad and his girlfriend. Jesse has been best friends with his wife since elementary school, they have this amazing life and it is hard to leave that being, any decision he has made, he made with her. Sami says he has been thinking about the game, he wants to get rid of Cassidy next. Noelle knows he is a flipper, bringing him she believes is beneficial for her game. Owen has an idea of splitting votes between Cassidy and Karla, Noelle just hopes they can get rid of one of them.

Over back at camp, Cody is thinking about that pizza and bumped he is not a part of the conversations having over at the sanctuary. They talk about voting out Sami. Cassidy believes there is a silver lining to winning the challenge, they are having conversations and she tells Cody they should get rid of real big threats.

Time for the immunity challenge, the eight players left will have to with one hand, steady a balancing board while simultaneously building a house of cards with the other hand. First player to build a house of cards tall enough to reach the finish mark, wins individual immunity, a guaranteed spot in the final seven. Basically everyone drops after their first try, and is at it again. Jeff tells them not to get frustrated, just start over again. Cassidy wins the challenge, and it puts a hiccup in the plan of splitting the vote between her and Karla.

Jesse is putting his emotional commitment he has back home at the forefront of the game. He likes Noelle, but on a game standpoint, he believes that she should be targeted. But when you blindside someone, you need to know what you are doing. Jesse needs a cover story and he starts to work out his plan to get rid of her.

At tribal council, Jeff tells Noelle that she has had the most determination that he has ever seen. Noelle says that if she can inspire one person then it was worth it. Cody says the strategy talk changed hour to hour. Sami says that is what makes the game so hard. Gabler says there are precision targets and one is going to hit the mark tonight if he is right. Time to vote, no immunity idols are played. First vote is for Karla, then Noelle, Sami, Karla, Noelle, Noelle, Noelle. Noelle is voted out.