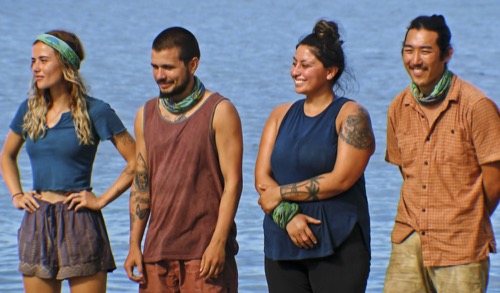 Tonight on CBS Survivor airs with an all-new Wednesday, November 30, 2022, season 43 episode 11 and we have your Survivor recap below. In tonight’s Survivor season, 43 episode 11 called “Hiding In Plain Sight,” as per the CBS synopsis, “As the tide rises and falls, castaways hold their breath to find out who will win the immunity challenge. Also, one castaway will spy something hidden in plain sight.”

Tonight’s Survivor episode begins with Noelle having gone home. Sami was so surprised, he and Owen were kept out of the vote. Sami admits that he wrote Karla’s name down, he thought the vote was going that way and she had an idol. Gabler says Cody and Jesse flipped, but he tells Owen that he has the plan to get them to a final three. Owen can’t believe he keeps finding himself closest to the person who is blindsided. Although this is the first vote that Sami was left out of, he got burned pretty badly in his opinion.

A boat arrives with a message, “with only seven left in the game, any advantage worth having, there is one hidden in your jungle, go.” All seven take off like bats out of hell, off to the races, no conversation needed. Sami could use this advantage, he considers himself at the bottom of the game. Cody ends up finding the advantage, it was stuck to a tree. When he is alone, he reads, “you have found an advantage that could give you power in the game.. but only if you know your tribemates well.

For your next immunity challenge, you can bet on one player (besides yourself) who you think has the best chance to win the challenge. This gives you two chances at immunity. You can win it yourself.. or correctly predict you do end up winning. If they win, you win.” To help him make his prediction, the challenge is called the last gasp, and he knows exactly what it is from watching previous seasons of Survivor.

Time for the Immunity Challenge where they are going to take a spot under a grated steel barrier in the water. As the tide rises, their breathing room will decrease until there is no more room to breathe. The person who lasts the longest will win. Cody announces that he found something in the jungle, and he gives it to Jeff. After one hour everyone wants it to be over, and the tide continues to rise. That steel grate is being pushed around by the waves.

Karla and Owen are the last two, everyone is out, 2 hours and twenty minutes and they are still going at it. The tide that was once rising is now dripping. This has never happened before. Jeff says they are making an unprecedented decision, the two wins individual immunity. 43 seasons, 22 years and they never had players outlast the challenge. They made history and deserve immunity.

The consensus around camp is to get rid of Cassidy, and Karla is all for it even though she is her best ally because Cassidy knows she has an idol and she is afraid that she is going to tell someone. Although, Jesse wants to get rid of Sami.

Who did Cody bet on to win the challenge, he chose Owen. This means Owen, Karla, and Cody are safe. Sami played the shot in the dark, he is not safe. Any votes cast against him will still count.

The votes, the first one is for Sami, then Sami, Sami, Sami.

Sami is voted out.