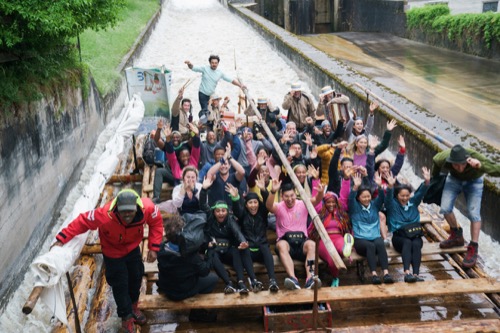 Tonight the CBS series The Amazing Race airs with an all-new Wednesday, September 21, 2022, season 34 episode 1 and we have your The Amazing Race recap below. In tonight’s season, 34 episode 1  called, “Many Firsts But Don’t Be Last,” as per the CBS synopsis, “12 new teams start their journey on THE AMAZING RACE outside the U.S., in Munich, Germany, and in this season’s shocking new twist, one team will be eliminated at the end of every leg.”

Tonight Amazing Race episode begins in Munich, Germany where twelve new teams are headed to the starting line. Luis & Michelle are Team Miami, they have been together 13 years. She is a professional dancer and he is a firefighter. Derek & Claire met on Big Brother and have been dating for eight months. The teams are on a log ride and all of sudden go down a steep decline. They arrive at Nymphenburg Palace where Phil officially welcomes them to the start of the race. He tells them this is home to the biggest beer fest in the world, Oktoberfest. Phil tells them about Rex and Tim, Rex was the head coach in the national football field and Tim is a probation officer.

They are team T-Rex. Abby & Will are childhood sweethearts and she can barely hold back her excitement. Quinton & Mattie are former Rams cheerleeders. Molly & Emily are identical twin sisters who met a year ago. Being on the race gives them a unique opportunity to make up for 36 years. Linton Sharik are father and daughter, she says they are immigrants from Jamaica. Phil says there are a lot of first on this race, this is the first time ever that they are starting the race outside the United States. Another thing is new, in the first leg they can compete in the three challenges in any order they want. Lastly, there are no non-elimination legs, if they arrive last they will be eliminated.

When Phil says go, they run to get their bags, there is an envelope on top with the three challenges. They can do them in any order they want, they will find the clues as they go to find Phil at the Pit Stop and, there is a car for each of them to use. “Get Ready To Scramble,” the challenges are ROLL at Luitpold Park, SAW at Biergarten Seehaus and SMASH at Augustiner-Keller Biergarten. In ROLL they have to roll a beer can through an obstacle course in one minute, in SAW they have to saw through a log and in SMASH they have to smash an enormous block of ice. Aastha & Nina ask for directions and map them out. Derek & Claire do the same so they don’t have to stop between challenges and ask for directions. Teams all have their strategy and take off.

Marcus was stationed before in Germany so he is familiar with the place, he and Michael do ROLL first. They have to both start at opposite ends and roll the beer can, they fail first try. Dom & Rich have known each other for eight years, they are motivational speakers, they have chosen to do SAW first. The challenges are not as easy as they sound. Marcus and Michael are on their second attempt and they do it. Aastha are making an assumption that the Pit Stop is going to be at the park, so they are starting at the furthest challenge from the park and moving their way forward. Derek & Claire do ROLL on the first try. SMASH seems to be the easiest of the challenges. Rich & Dom are putting their entire body in SAW and Dom is getting tired and frustrated.

Linton & Sharik arrived at SAW after Dom & Rich and they finished first. The blade was sharp, there was no reason to pull the saw as fast as Dom & Rich did. Derek & Claire are next, they are getting a little worried because they haven’t seen any teams in a while. Marcus & Michael are headed to their last challenge. Aubrey & David are going to their second challenge and they have no idea where any of the other teams are. Derek & Claire have finished all challenges and put all their pieces of clues that they received together that forms an angel, which is their final clue to find Phil at the Pit Stop, Friedensengel – Angel of Peace. With no non-eliminations on this race, one team will be eliminated.

Rex lost fifty pounds for this race, it was important to him to be in shape so they could have a good chance. Luis & Michelle finally finish SAW, they made the mistake of sawing to hard and fast. Rich & Dom are having a hard time on ROLL, but they end up doing it. Marcus & Michael are on SAW and they see that it is not that easy. Claire sees the Angel, she is hoping they are first.

Claire & Derek are in 1st place, they have won $2,500 each. Claire says they were just racing to not be last. Glenda & Lumumba are in 2nd place. Quinton & Mattie are in 3rd place. Aastha & Nina are having a rough time on ROLL, but hey finally get it. Linton & Sharik are in 4th place, Emily & Molly in 5th place. Marcus & Michael are in 6th place, Tim & Rex in 7th place. Abby & Will are in 8th place. Rich & Dom in 9th place. Luis & Michelle are the 10th team to arrive. Aubrey & David are in 11th place. The last team to arrive and be eliminated from the race are Aastha & Nina. They said they had fun and no regrets.