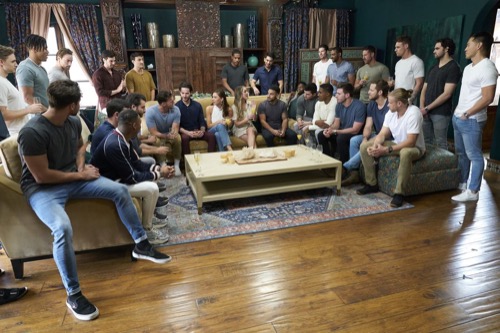 The Bachelorette airs on ABC this evening with an all-new Tuesday, July 18, 2022, episode, and we have your weekly The Bachelorette recap below. In tonight’s season 19 episode 2 as per the ABC synopsis, “Following last week’s shocking canceled rose ceremony, Gabby and Rachel surprise the 29 men left at the mansion by daring them to compete in a swimsuit pageant in order to earn one of six spots at the group date after-party.

The next morning, Rachel takes off for her first one-on-one with a once-in-a-lifetime Zero-G Experience, followed by a surprise musical performance by Ashley Cooke and Brett Young.”

In tonight’s The Bachelorette, there were two bachelorettes this year. Double the trouble and double the fun! One of the contestants said it best, the two women were bound to eventually like the same guy. There was going to be tension from that. There was tension already what with guys pursuing both women at the same time. This experiment wasn’t going to end well. There were also the guys to take into account. The guys were overcrowded at the house. There were more guys than beds for them. Some have taken to sleeping outdoors. Some are sleeping on the couch. There were so many of them and the women haven’t talked to half of the guys there.

But they set about correcting that tonight. Both Rachel and Gabby went to the house. They talked some with the guys and they also dropped off gifts. Their “gifts” were speedos for the men. The ladies wanted the guys to wear them so that they could see how they look without their clothes on. Some of the speedos were a little too snug. The women got to see everything and the audience at home only got to see a black bar in that area (☹). The only sign that the audience at home got to know what each guy looks like in a skimpy speedo was the bachelorettes’ reaction. Gabby let a happy squeal for instance when she saw Logan in his speedo.

It was a little hard for the ladies to ask the guy questions. They had needed time to take in everything they saw before they got around to asking questions and by the time they did – some had already made an impression. Quincey sure did in his Borat-themed speedo. Both of his butt cheeks were out and so did a little turn on stage. The ladies were happy to see him in full glory. The guys behind him, not so much. Then there was Jacob. He looked like Tarzan in his speedo and he talked like a mortgage broker. Which definitely won over Rachel. Something that also helped a guy stand out was when he started singing.

Chris was singing so much that the ladies completely forgot the question they were going to ask him. Something that could be a good or bad thing. There was also a guy who poured canned tomato sauce all over himself. That was hard to clean up. It also didn’t move Rachel who is Italian. Rachel said that no guy could be taken seriously with sauce from a can. The ladies later asked six of the guys to join them for a much closer conversation. Some got jealous. Quincey felt bad because he literally put his butt cheeks on the line and it failed to move the ladies. Chris also made some snarky comments about how he does need to go on a date because he already made a great impression.

The date however was a bust for Rachel. She pulled one guy aside only for him to tell her that he feels a better connection with Gabby than he does with her and so that knocked her off her game for a bit. It took her a while to talk to someone much less feel comfortable again. Then along came Logan. Logan managed to sweet talk both Gabby and Rachel. He even kissed both of them. Which proved to be a problem. The ladies each had one rose to give that night. They talked about who they felt a connection with and they both felt that guy was Logan. They understood that he had to get to know both of them. And so one had to decide to give him up.

In the end, that was Gabby. Gabby let Rachel give the rose to Logan. Gabby gave her rose to Johnny. Then there was the first one-on-one. Rachel asked out Jordan V. He was the one who told her that he was there to meet her and she needed that confidence boost after her conversation with the other guy. Rachel took Jordan flying. She thought she could share some of her worlds with him. She didn’t know that he was deathly afraid of heights. Jordan was a racecar driver. He loved speed just not when it was combined with heights. Jordan calmed down when they had zero gravity. He enjoyed spending time with Rachel.

They even kissed up in the air. Rachel helped him with his fear and he was hoping that made an impression on her. Speaking of impressions, Chris hadn’t been asked on either a one-on-one or a group date yet he was already talking about fantasy suites. He was telling everybody that it would be a deal breaker for him if the woman he eventually chooses goes on to have sex with other people. He said that’s when he would be done with the competition. Everyone he told this had all thought he was being presumptuous. They thought he was being disrespectful to the ladies. And no one liked his confidence that was bordering on arrogance.

Chris got on several guys’ nerves. Chris was very intense. He talked to the other guys with a lot of condescension. Something that Logan pointed out. Nate also told him that if he does make it to the fantasy suites – he needs to be in love. He doesn’t know what he’ll do if he’s in love. He also shouldn’t be trying to control a woman when he’s in love. Nate seemed like a good guy and so it wasn’t surprising when Gabby later asked Nate out on a one-on-one. Meanwhile, Rachel’s one on one took a turn. The date was going well. Jordan was a great guy. He just wasn’t the one. Rachel realized that from the beginning of the date and so it ended on a sour note for her.

Rachel said goodbye to Jordan at the end of the date. He got sent home. Which made Nate nervous. Nate was worried on his date with Gabby that he would be sent home and yet Rachel saw the two of them together. She thought they had a spark. She thought it would go far. Gabby for sure had fun with Nate. They went on a helicopter ride. They went in a hot tub on a mountain top. It was the reason that Gabby told him to bring along his speedo. As for the date, it went well. They talked. They kissed. Nate told her all about his daughter who was six and how grateful he was to be a girl-dad.

Gabby was close to her dad growing up. She wasn’t really close to her mom. But her relationship with her dad hasn’t always been bad and she has had to relearn how to welcome love as an adult. So, hearing about Nate’s love for his daughter had helped her picture a future with him. Gabby gave Nate a rose at the end of the date and he was one of three guys that were safe going into the rose ceremony. The ladies were all over the place on who they wanted to give their other roses to. They used that night to sus out the potential in the other guys. They went on to kiss a few. They also formed connections with some of them.

Quincey and another guy also mentioned to Rachel what Chris said. Rachel didn’t like hearing a guy being that presumptuous. She felt he was trying to sexualize her and Gabby. She told Gabby about what Chris said and together they talked to Chris. They wanted to hear his side of things. They both asked Chris to come to the side. They asked him about his comments. He tried to justify what he said. He claimed that they were all talking about fantasy suites. Which wasn’t true. He brought it up. No one asked him about it. He simply brought it up and he said he didn’t want his future wife doing that. And he was so condescending about it, that the ladies asked him to go.

Chris was the second person eliminated tonight. Jordan V was the first. Chris was the second. Chris also chose to be difficult and he came back to the house to talk to the guys he felt must have ratted on him. The ladies had to remind him that they already asked him to leave. Chris then left again and everyone hoped that would be the last time he showed up. As for the others that got sent home, they at least left with their dignity intact.

Something that couldn’t be said of Chris.