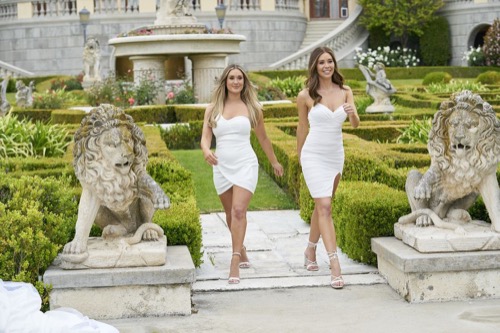 The Bachelorette airs on ABC this evening with an all-new Monday, July 25, 2022, episode, and we have your weekly The Bachelorette recap below. In tonight’s season 19 episode 3 as per the ABC synopsis, “Gabby and Rachel enter a crucial week of getting to know their men, full of exciting guest appearances2 the largest group date in Bachelorette history and shocking revelations that may have lasting consequences.

First up, Rachel and one lucky guy are treated to a day of Hollywood glitz and glamour by TV host Karamo Brown, featuring a big-screen glimpse into each other’s lives set to the music of composer Matt White. Then, Gabby’s one-on-one is crashed by her biggest fan—grandpa John—which begs the question, will her date be able to fit in with the family?”

Tonight The Bachelorette episode begins with 21 guys and there are still a lot who want to explore both relationships.

Rachel is all ready for her date with Zach, she really wants to see if he is there for her. They have a really fun day planned and Karamo is the one who made all the arrangements. They are going to have a red carpet experience.

Elsewhere, Gabby goes to see the men for a visit which surprises them. The men are playing football and she finds it frustrating because the men are not coming forward to her. She leaves and feels like she is giving so much to them and they are not giving anything back. She is terrified to be let down.

Rachel and Zach are enjoying champagne with Karamo and he says there were sparks immediately with Rachel. The couple is trying on outfits and getting pedicures. In the end, the two choose outfits and look amazing.

Gabby is kind of in her head, going to the house was weird, nobody showed initiative and she is hurt.

The men have a knock at the door, a date card for Erich, “who said three’s a crowd, love Gabby.”

Rachel and Zach arrive at the premiere and the paparazzi snap lots of photos of them before they go to the premiere. They arrive there and nobody is inside the theatre, it is a private viewing just for them. Matt White begins by playing the piano, the movie is called “Me & You,” and the videos are all about them growing up.

Both are trying not to cry, the videos were very touching. They end it with a kiss and she tells him that he was a cute kid. He tells her that he is the luckiest son in the world. He says that his father loves planes and wanted to become a pilot. She says she feels like she spent weeks with him already, this has been incredible. Zach really believes that they have started the beginning of their future love story, it is very real.

In the end, no surprise that Rachel gives Zach a rose.

The next day, Gabby is getting ready for her date. She left yesterday wondering if the guys were really interested in her. She is excited but a little apprehensive. She arrives at the house and her grandpa arrives, he is going on the date with them. Her grandpa’s approval of Erich will mean everything to her. Erich likes him, he is funny and charismatic. They arrive at a sound ceremony. Grandpa John has a nap. Next, it’s on to the bowling alley. So far it’s an easy date for Gabby, she doesn’t feel like she has to impress Erich.

Later, Gabby and Erich sit down for dinner together, without grandpa. They start talking about family and when he asks about her mother, she says she doesn’t have a relationship with her and she is clearly upset and Erich doesn’t anything to console her. Gabby steps away for a few minutes.

Gabby returns to the table and explains to Erich about her past and that she has trouble opening up about her relationship with her mother. They chat some more and she leans into him for a kiss, it was a little awkward, he actually looked like he pulled away from her. Gabby gives him the rose.

The next day, Rachel and Gabby are both dressed in wedding dresses for a photo shoot. The date card for this one said “who do you picture yourself with?” All of a sudden, the girls pull off the long dresses and have short ones on. Franco Lacosta is there to help the men to figure out who they picture themselves with. Franco chooses all the outfits. Meatball is looking like a baby, Kirk looks like he got hit by a mac truck. Quincy is in a hospital gown with his butt showing. Poor Jacob only got a leaf to wear. There are many different scenes and lots of photos taken. Nate made her more special than any else did on Gabby’s journey so far.

Later that evening the guys meet with Gabby and Rachel at Sofi Stadium. Rachel pulls Aven off for a little one-on-one time, they laid down in the end zone and made out. And on and on, she continues to make connections. Meanwhile, Gabby is with Tyler and he tells her that he wants to pursue Rachel, not her. Hayden also tells Gabby the same thing and tells her that she is rough around the edges. Gabby thinks Rachel is going through something similar, but she is not.

Rachel and Gabby join all the men, it is time to give out the date roses. Rachel gives her rose to Aven. Gabby says she doesn’t feel like she can give out her rose.

Gabby tells Rachel that when Hayden told her that she was rough around the edges it hit a chord.

The men gather for the cocktail party, Jessie walks in and tells them Gabby and Rachel are not coming and the cocktail party is officially canceled and they will be moving directly on to the Rose Ceremony. Moving forward, if they accept a rose tonight they will be committing to dating that woman. The guys who are on the fence are going to have a tough time.

Time for the Rose Ceremony, there are two pedestals with roses. Both Rachel and Gabby have decided which men they wish to continue dating. The women are really excited to go on their own journey.