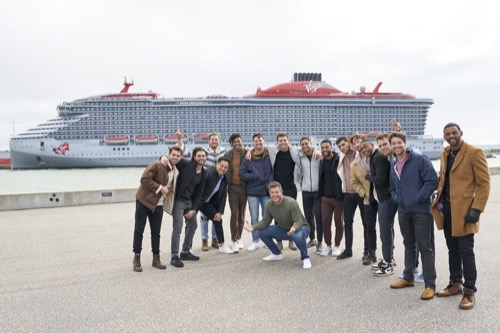 The Bachelorette airs on ABC this evening with an all-new Monday, August 1, 2022, episode, and we have your weekly The Bachelorette recap below. In tonight’s season 19 episode 4 as per the ABC synopsis, “Still reeling from last week’s shocking rose ceremony which split them into two groups, Gabby and Rachel’s men board the Virgin Voyages Valiant Lady, setting sail across Europe on their journey to find love.

Starting off in Paris, France, two lucky men join the leading ladies on an unforgettable rainy-day adventure in the city of love where Gabby and her date shop for berets in the district of Montmartre, and Rachel and her guy learn the art of French crêpes near Notre Dame. ”

Tonight’s The Bachelorette episode begins with the guys, they think it is easier now that they are separated into two groups. Hayden is worried that he said Gabby was “rough around the edges,” and it is being used against him. Hayden is also calling both women bitches to the other guys and its not going over well. Then he says that neither of them hold a candle to his ex.

Jessee walks in the room and tells the guys that Gabby and Rachel left and they are heading to France where they are going to go meet them. But not all are headed there yet. Two of the guys are going to spend an incredible date with one of the women in Paris. Gabby wants to spend it with Jason Rachel with Tino. The girls are in Paris already and they sit in a café to talk. Rachel says the last rose ceremony was her lowest moment, three men rejected her rose, it was hurtful and embarrassing.

The rest of the guys arrive in France, Jesse speaks French to them and none of them understand. He tells the they are going to be staying on ship. Team Rachel have their hang out section on the boat and Team Gabby have theirs.

Jason and Gabby are on their date, she is hoping that he breaks out of his shell a bit. They go into a store and get their heads measured for hats.

Rachel and Tino stop for crepes and the owner invite them in to make some. Tino says she is the most stunning girl he has ever been able to spend time with. Over wine, he tells her that she is charming.

Later, the two couples meet up, Gabby and Rachel have time to chat. They both had a great time and so did the guys.

Dinner time, Rachel and Tino are having dinner alone in a church. They start talking about the deeper stuff in a relationship. They both want a family, she says it is important for her. The two really have a connection and Rachel says he was the kickstart that she needed, she feels like she is going to fall in love with him.

Back at the boat, the men are chillin and a date card arrives. This is from Gabby for Nate, Kirk, Quincey, Erich, Michael, Mario, Spencer and Johnny, “Love conquers all, but not without a fight.”

Jason and Gabby are at dinner and she hopes they can find some solid ground to show that they are compatible with each other. He tells her that growing up, he felt like he always wasn’t good enough and it takes him longer than most to open up because of that. And, through therapy he has learned how to speak out for what he wants. She tells him about her issues with her mom and that they don’t have a relationship, and the therapy that she has been through to deal with it. She sees a lot of herself in Jason, she tells him that she is really grateful that she had the date with him.

Time for Gabby’s group date, the guys will be boxing for attention with her. The guys are going as hard as they can. The winner will have a one on one date with her, and a rose will be involved. Rachel brings her guys on Gabby’s date for a little interaction. Rachel is upset because her guys are there cheering on Gabby’s guys and not paying attention to her again. In the end, Spencer wins the belt and the time with Gabby. At dinner the two bond over both coming from a military home. Meanwhile, Rachel is alone and feeling so disappointment that her guys were ignoring here again.

At this point she wants to be chosen, she doesn’t want to beg them. She says that Clayton made her feel more wanted than these guys and it hurts her feelings. She doesn’t feel like she deserves to be The Bachelorette. Rachel goes to see the guys and tells them that she is pretty upset. They really made her feel hurt today because nobody had eye contact with her. She genuinely wants these moments with them. She walks away, they all looked shocked.

The next day, Rachel and her men are on a date, they enter a room where two people are making out. Today’s date is all about romance and pursuing Rachel. They have to flirt with her, she smells their armpits, they have to French kiss into their hands and last, they have to write love letters to her.

Rachel chooses to spend her evening with Tyler because he really stood out during the group date. He tells her that he is really that he got to write that love letter to her and pour his heart out.

He tells her that he was in a deep relationship, he was ready to commit, bought a house for them and she dumped him, said she couldn’t do it. He is afraid of getting hurt again. Rachel tells him that she feels so much of herself in him. She feels that getting hurt is so worth it, because it is your journey to finding your person. He tells her that he came on the show for her, not Gabby. They kiss. Rachel is so excited about Tyler, it is such a good feeling. She gives him a rose.

Time for the joint cocktail party. Gabby sits down with Nate and she tells him that she loved what he said during the group date, they kiss. Hayden sits down with Rachel and shows her photos of his dog, one of the most important things in his life. His dog had a brain tumor, only has a couple of months to live and he wouldn’t be there taking the time away from his dog, if he wasn’t serious. As he is speaking to her another guy walks up and wants to talk to Rachel, Hayden isn’t impressed when she gets up and he tells Meatball.

Rachel searches Hayden out. She tells him that she knows what he said, “I can’t trust these bitches,” and comparing her to his ex. He denies everything, says he doesn’t speak like that and it is not his character. She asks him if she can walk him out, she knows he is lying and she has had enough.

Jesse goes to speak to men and tell them that Rachel is upset about the things that Hayden said, so the cocktail party is over, they are going right to the rose ceremony.

The girls give the roses out and Rachel does offer one to Logan, who told Jesse that he felt no spark with her. Logan accepts it, he feels selfish and like a bad guy. Logan has the daunting task of telling Rachel next week that he wants to pursue Gabby and not her.