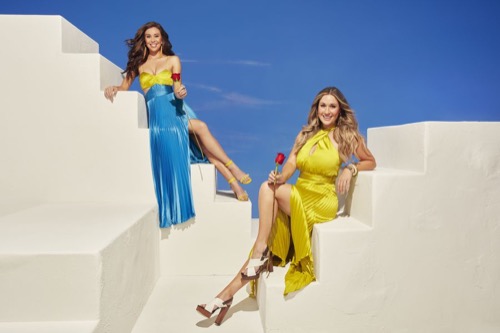 The Bachelorette airs on ABC this evening with an all-new Monday, August 22, 2022, episode, and we have your weekly The Bachelorette recap below. In tonight’s season 19 episode 7 as per the ABC synopsis, “It’s a whirlwind week as Gabby and Rachel simultaneously visit their beau’s hometowns. Knowing a proposal may be right around the corner, each woman sets off on their cross-country adventure hoping that meeting the men’s families will open the door to finding clarity and possibly even a confession (or two) of love!

But family is complicated and with every open door, another may close. Will the ladies be received with open arms? Will the pressure prove to be too much? And who will continue on their journey to win the Bachelorettes’ hearts? ”

Tonight’s The Bachelorette episode begins with the women getting ready for the hometown dates, Gabby is only visiting three men, Jason, Johnny, and Erich.

Gabby’s first hometown is with Jason in New Orleans. She always knew there was something special about him, although he is more reserved, she does see a future with him. Jason loves New Orleans and is happy to share it with Gabby. He tells her that in the very beginning he wanted to leave, but he stayed for her. He tells her that his parents are separated so she will be meeting his dad. They meet in the park, his father brings flowers for her. Jason spends some time alone with his dad and he says that he and Gabby have an electric connection.

His father can see the happiness, calmness, and ease Jason is projecting when he is with Gabby. Later that evening, they head over to see Jason’s mother next with the rest of his family. His mother, Karen, tells Gabby that when she saw the two of them together, she saw something really good, something cute. She wants them to have fun and be happy, she is hoping for the best.

Karen says best case scenario they find their happily ever after. Jason tells his mother that he can never see himself getting engaged, it is not realistic to him. Maybe it will change, but he needs space to process everything that has happened and he finds it scary. Karen asks if he had the conversation with Gabby, he says no, but he plans to. Then she asks how he would feel without her and he says he would be really upset.

Rachel’s turn for a hometown, she goes to see Zach in Anaheim, CA. The last time he saw Rachel he told her that he was falling in love with her. They go for a bicycle ride, stop at a building and climb a ladder and go have drinks on a rooftop to watch planes overhead as they both did with their dads when they were children. They are at Zach’s family home, his mom and dad are there, his aunt and uncle Pat. His father, Chapman, asks Rachel for a chat. He tells her that he is concerned. She says they had a connection right from the beginning. He tells her that Zach is looking for his soul mate. Meanwhile, Zach tells his mother, Megan, that he is falling in love with Rachel, she is concerned about how fast and hard he is falling.

Rachel is in her second hometown, she heads to Palm Beach, Florida to meet Johnny and his family. She says that he is super hot and makes her feel so special. They had a slower start but still have a deep connection. They start by going over to see Johnny’s family first, his mom Elizabeth, his dad John, his best friend Perry and his brother Robert and his girlfriend, Jillian. Best case scenario they have an amazing time. John really likes Gabby and hopes she is the one. Elizabeth tells Gabby that Johnny doesn’t give his heart to anyone. Johnny tells his mother that he doesn’t know if he is ready to get down on one knee, that is a huge commitment. Johnny has his family’s approval, they really like Gabby and see the chemistry. Later, Gabby and Johnny go for a boat ride.

Another hometown for Rachel, she is in Wildwood, NJ to meet with Tyler and his family. They spend time on the boardwalk eating, playing games, and going on rides. Rachel admits that her relationship with Tyler is a little bit further behind than with the other guys. She cares about him so much, but it really hit her that her other connections are stronger. Rachel wants to back out of her hometown but feels like maybe she is not giving him a fair chance. She tries to let him down and he tells her that he is in love with her and she is the most incredible person that he has ever met.

She tells him and totally breaks his heart. He tells her that knowing how much his family means to him, he wouldn’t want to put them in that position if she is not wanting to move forward with him. That was rough. She feels horrible, she didn’t even know what to say to him when he said he loved her. Tyler has to go back to his family’s home and tell them what happened. He tells his mother that he loves her and still does, he just wanted someone that felt the same about him.

Gabby is in New Jersey to see Erich and his family for her last hometown date. She is nervous because Erich’s father has been battling cancer for three years and she doesn’t know what to expect. They go to Erich’s family home, his mother and family are there as well as his grandparents. Erich has his father’s acceptance, he sits with his mom and she sees that Gabby means the world to him.

Erich’s mom sits down with Gabby, they talk about Allan’s incredible will to live. She says that if they decided anything, commitment is really important to her family. They have been married thirty-five years, and they have been through a lot but they always have to be there for each other. Gabby says you can tell how much love they have for each other and she feels grateful to be there. The day really solidified Gabby’s feelings for Erich. Later, when Gabby and Erich are alone, she tells him that she is falling in love with him.

Rachel is in Santa Clarita, California to meet Tino and his family. They arrive at his family’s house, and his mother, father, and brother are there to meet her. He tells his family that the first rose to him. Tino sits alone with his dad who says t has been only five weeks, how can he know enough about her? Talking to Tino’s mom, she grilled her and is very skeptical. Next, Rachel meets with his father who grills her in the same way and Rachel is nervous. She genuinely looks like she is going to cry. Rachel doesn’t even know how she made it out alive and she wonders how Tino is going to handle things when his parents acted like they didn’t like her. He tells her that he is falling in love with her and she says she feels the same way.