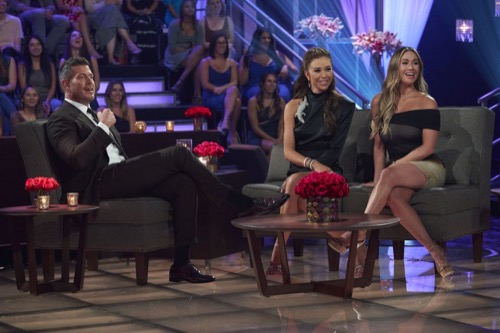 The Bachelorette airs on ABC this evening with an all-new Monday, August 29, 2022, episode, and we have your weekly The Bachelorette recap below. In tonight’s season, 19 episode 8 called, “The Men Tell All,” as per the ABC synopsis, “It’s a night full of surprises, apologies and special guests as Rachel and Gabby reunite with 14 of the most unforgettable men from this season. But first, Aven’s spooky hometown date in Salem, Massachusetts, will be revealed!

Once seated together for the first time since the show premiered, the former suitors kick off the night by addressing the controversies surrounding Hayden and Chris, but will either of them show up to atone for their actions? Later, the women of the hour, Gabby and Rachel, answer burning questions from their former flames and welcome the stars of Universal Pictures’ “Bros,” Billy Eichner and Luke Macfarlane, to the stage to join in on the action.”

Tonight’s The Bachelorette episode begins with host Jesse Palmer saying that will be two engagements this season, one for Gabby and one for Rachel. It’s the Men’s Tell All, but first, we get to see Rachel and Aven’s hometown date that Jesse says is cursed.

Aven’s hometown is Salem, Massachusetts. Rachel has a strong connection with Aven and absolutely feels like she could have a future with him. She is nervous because he told her that his parents didn’t approve of two previous women that he took home. His parents have not been together for six years when meeting a significant other of his, this will be the first time. They head to Crow Haven Corner and meet with Lorelei who is “The Love Witch.” She tells Rachel and Aven that she can do a love spell on them. She tells Rachel she is a giver but she needs clarity. When Lorelei goes to leave the floor, their love spell tumbles to the floor as Lorelei bumps into the table and falls over.

Time or Rachel to meet Aven’s parents, they meet at a seafood restaurant. Aven starts by thanking both his parents for being there together for him to introduce Rachel.

Aven’s father speaks to Rachel alone, she tells him that Aven is so incredible and they have so much in common about how they live their lives and their future. Next, she sits down with his mom who says that the fact that Aven has brought her there conveys a really strong message to them. Both Aven’s parents give their approval. Later, Aven tells Rachel that he is falling in love with her. Rachel feels confident this could be it, her happy ending.

Jesse reveals that after the hometown dates Gabby and Rachel decided to keep all the men.

Back to the Men Tell All, Jesse says hi to all the men in the audience. Nate says when he saw the two women he was telling himself not to pass out. Tyler says the women did an amazing job. Logan says he learned a lot of lessons. We take a look back at all the men that dumped Gabby for Rachel. Then, we see the other way, Rachel is rejected at the Rose Ceremony multiple times by some of the men.

Logan is put in the hot spot for what he did, he stayed on the show even though he had no feelings for her. Then, Chris, was talking about fantasy suites before he had a connection with the women. Then Hayden for saying “I can’t trust these bitches,” and how much of a coward he is in not showing up.

Ethan said in the first two weeks it was tough to navigate which woman he wanted to pursue. Quincey says he knew right from the start. Jacob says he was rude and selfish in the experience and he is sorry for that.

Jesse talks about Chris, he was booted out of the house so hard that he didn’t even show up for the “Men Tell All.”

The guys complain about Logan and how they lost a lot of time because of what he did. Logan goes and sits in the hot seat. He says he jumped sides because he was conflicted not because he wanted to mislead or hurt anyone. He says he is sorry to Gabby and Rachel, his heart was in the right place.

Jesse announces that every single person in the audience is getting a free cruise from Virgin voyages.

Next, Bachelor Nation’s Nate is in the hot seat. Jesse says his vulnerability and maturity were impressive to watch. We take a look back at his journey with Rachel, he says his first kiss with her was amazing. We look at the heartbreaking breakup, where Gabby broke up with him because she is not ready to be a mom to his six-year-old daughter. Nate admits that it is one of the hardest breakups of his life. Jesse says there are rumors on social media that Nate kept his daughter a secret for a year with a relationship that he was in before Gabby. Nate says he put a wall up to protect his daughter.

Gabby and Rachel join Jesse on stage. Gabby says she felt like the men showed them that this experiment was hard to navigate. Rachel says they made mistakes, but they were just following their hearts and doing the best they could. The women agree that having each was an amazing support system and helped them to get through the process.

Rachel tells Logan that she was hurt by what he did to her, but she understands. He says he was looking for the right time to speak to her, but that never happened.

Jesse brings up Rachel saying goodbye to Tyler on the hometown date before meeting his family. He says he didn’t think he could get to that level with him and wanted to be honest with him. Tyler says she did it with class.

Gabby says it feels good to see Nate again. He tells that just because it ended doesn’t mean it wasn’t beautiful. He believes that the way she ended it was beautiful and he still adores her.

Billy Eichner and Luke Macfarlane join the stage to talk about their new movie, “Bros.”

Jesse says there is going to be a shocking end to this season that nobody is going to see coming. There are a lot of tears coming before the two stand at the altar.