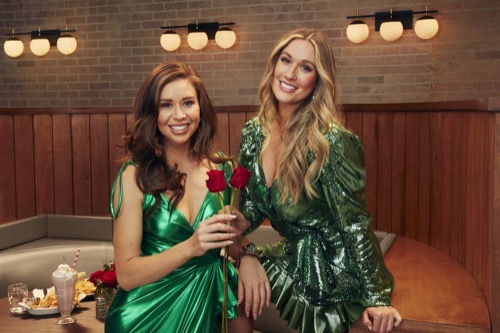 The Bachelorette airs on ABC this evening with an all-new Monday, September 5, 2022, episode, and we have your weekly The Bachelorette recap below. In tonight’s season, 19 episode 8,” as per the ABC synopsis, “The heat is on as the Bachelorettes arrive in gorgeous Mexico! Ready to see their final three men for the first time since hometowns, the ladies toast to love and set off to begin a week of boats, beaches, and next-level romance.

In part one of overnight dates week, Gabby takes a leap of faith with Erich and sets sail with Johnny while Rachel hits the deck with Aven and takes the reins with Tino, but will their dates deepen their relationships, or will the heat of the beach be enough to break them apart?”

Tonight’s episode begins in Riviera Maya, Mexico where Gabby and Rachel sit down and enjoy some champagne to celebrate. Rachel says she is in shock that they made it this far because this is the point where everything went haywire in Clayton’s season. Gabby says she doesn’t want to make the guys feel the way she did with Clayton. Rachel tells her that she is really into Tino, but his family wasn’t thrilled about the relationship. With Zach, every little piece is there for her, he was the first one to tell her that he was falling in love with her. But, she doesn’t feel she is there with Zach. She wants to use the time, to be honest. Rachel brings Aven first for their date in Mexico, she loves how honest he is with her, and she feels like she is falling in love with Aven. Gabby says she has a great relationship with Jason, she feels like she is falling in love with him but she has no idea how he feels. Johnny and she have a lot of fun, unfortunately, she thinks they are in two different places in their lives. She already told Erich that she is falling in love with him, their relationship has grown so much since the hometown dates.

Gabby’s first date is with Erich, his dad has been battling cancer and she can’t imagine what he is going through. She is reveling in the bliss that they both said they are following in love with each other. Erich is happy to be on the date but what bothers him is that there are two other guys, so he doesn’t know if he is the one. They start their date by standing on elevated platforms and jumping into the water. When they get to the tallest one, Gabby is intimated by the height. She wants him to go first, but he won’t go without her. They do it, together. The more time she spends with Erich, the more she sees that she can spend the rest of her life with him.

Time for dinner, the two are all dressed up and ready, there is a potential this evening for the two to spend the night together in the fantasy suite. He tells her that his family is obsessed with her, and the hometown date could not have gone any better. She says that her family upbringing was very different than his because her parents divorced early on, and she doesn’t really have a relationship with her mom now.

Erich tells her that it really hurts when they are separated, he is in love with her and he doesn’t want to leave there without her. She tells him that she really sees a future with him, she really appreciates him, and is really falling in love with him. She gives him the fantasy suite card and he says obviously yes. He is so excited to have that meaningful time with just the two of them. Gabby feels like the future would be so good with him.

They enjoy their evening together, Erich is so happy, he says she is everything and more to him. He threw himself out there 100% and told her that he loves her, but it sucks that there are other relationships out there. He is not a super jealous person, but it still hurts that there are other guys there. Gabby thinks she is in love with Erich but she still doesn’t want to tell him, she wants to save it for the right moment. She asks him to please be patient with her.

Rachel’s turn for her date and this one is with Aven, she tells him they are going to have a really fun date. She is so excited to spend the day with him, he is someone she was immediately attracted to him and she is happy to be with him. They board a yacht, they are going on the water for the day. The more and more time he gets to spend with Rachel the more he knows he can spend the rest of his life with her. She doesn’t want to say she loves him because the word was used so carelessly with Colton, so she doesn’t want to say it until the end.

Jesse goes to see Tino who says every day that he is by himself is like nails on a chalkboard. Tino says his dad asked Rachel tough questions and she took away that his father didn’t like her and it was hard on him. His dad was a little skeptical and he caught Rachel off guard. If he wasn’t so sure that she was the one, this would be an easy week for him to walk away. It’s mind blogging to him at this point that she doesn’t know which guy she wants.

Aven and Rachel are still on the date, he says his parents are happy that he is happy. She says her hopes going into it was that they accept her and she feels like they did and it is a good feeling. They have a great time on the yacht and then change for dinner. He tells her that it has been an amazing journey so far and he hopes it continues. She tells him that everything she asked for he embodies. She feels so safe with him and that is huge for her in a relationship. She tells him that she is falling in love with him and that is a big deal for her to say. He is on could nine and he is so happy that the feeling is mutual. She gives him the fantasy suite card, he says yes.

After spending the night with Aven, the two are now on a different level. She says he is the whole package. He says he only slept like 20 minutes, but the evening felt natural and right.

Rachel is coming off the most incredible date with Aven to have her date with Tino. It is a big day and it has a lot of potential. They go horseback riding and his horse is a little rambunctious. They arrive at a place where they can sit near the water and talk. She says she has a lot of nerves because she feels so strongly about him. He feels that she is really nervous and he hopes it is not about his family.

At dinner, he tells her that he wants her to feel comfortable. She says her anxiety is just in general, she is trying to be positive but she does want to talk about hometowns. She says she felt that his family really didn’t like her, specifically his dad and she got scared. She doesn’t see how he is going to move forward if his parents are so skeptical. He tells her it is the process, it is unconventional and they just don’t believe in it. She is worried that if they get engaged his family will get upset about it. He says they won’t be upset and he sees it so clearly with her and they are just going to have to live with it because he wants a future with her. He tells her that he loves her, everything about her. She tells him that she loves him too, she really does. She gives him the date card, and he says yes to sharing the evening together.

Gabby’s overnight was so special with Erich, but today she is having her date with Johnny and she tells him that they are going on a sailboat. She tells him that he is so easy and she feels like she can be her ridiculous self with him. Whenever she is with Jonny it is so easy and effortless, she can really see a life outside of this with him. They get off the boat and take some time to sit on the beach. He says it takes him a while to open up, and she makes him a better man. She tells him that she is ready to get engaged at the end of this, but he says it is a hard thing to decide. It seems like he is not able to commit, she tells him to give her a moment and she takes a walk by herself. She returns, he says he wants her to be his person but he doesn’t know if he can get to an engagement in a week, it scares him and he doesn’t know if he can bring 100% to the table if he is not ready. He asks her if this is their goodbye and she says she thinks so. His feeling are numb, he doesn’t know how he feels. He can’t give her what she wants and had to be honest. Gabby had this fear all along, it is kind of a punch in the gut. She gets back on the boat and she leaves him on the beach.

Gabby found it really difficult to say goodbye to Johnny and now she is placing all her hopes in the other two men. There is a knock at the door, it is a letter. Gabby takes it in side and reads it, “I need to see it and will be waiting for you on the bridge.” She has no idea what it is about or who wrote the note.

It is Erich, he has nothing to tell her, he just wanted to see her. He says the night part of their date couldn’t have gone any better and thinking that she is spending time with the other guys is really giving him a hard time. She starts crying, she says they had an honest conversation about it in fantasy suits and can’t believe that he brought her here again to tell her and she feels pressure. He says he can’t just pretend that he is cool about everything. He says he is sorry. She says she knows where his heart is and it doesn’t feel good right now, why does she always have to defend herself, why can’t he believe what they have. She feels like he is testing her, and that is not what you do to someone you love. She feels broken, it always feels that the people who should love her never do. She walks away and leaves him there.