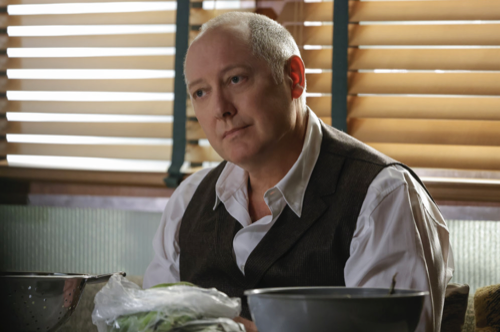 Tonight on NBC their hit drama The Blacklist starring James Spader airs with an all-new Thursday, January 13, 2022, episode and we have your The Blacklist recap below. On tonight’s The Blacklist Season 9, Episode 8 called, “Dr. Razmik Maier”,  as per the NBC synopsis, “The death of a professional tennis player leads the Task Force to a doctor who may be fixing the odds for a major sports betting syndicate. Red digs deeper into Dembe’s betrayal. Ressler struggles with sobriety.”

Tonight’s episode begins with a professional tennis player, Sam, he is coming out of a building and fans all around him, a reporter asks him about his relationship and if he is working with the doctor. Then we see him at home, a doctor is there, Dr. Razmik Maier, and Sam is upset that the reporter knew, the doctor tells him to calm down, he is nearing his goals and she is only one reporter; everyone else thinks he is aging like fine wine and he has never failed a drug test, and with him, he never will. The doctor encourages him to take an injection, and imagine what he has to do to be the best. His father arrives home, the doctor is no there and his father finds Sam unresponsive, laying down on the couch.

Cooper took a drug test, he was drugged, proof that he is innocent. But, he is being blackmailed, someone took photos of him getting the gun that night.

Red is with Mierce, he tells her that he knows Dembe gave Liz the letter before she died. His young friend Tadashi is going there, he wants her to have him hack the cell phone from that day.

Cooper is with the task force, they are talking about Sam, he was number eight in the world and now is dead. Red thinks a German doctor is responsible for Sam’s death. Boswell owns the worlds sports book and Red thinks they hired Maier to kill Sam, so they have the outcome they want. Supposedly, Maier provides the Boswells with insider information and in select cases, he accidentally overdoses a player whose performance can wipe out the Boswells.

Red is going to take the lead with the Boswells and has asked for Dembe to join him – when Dembe asks why, Cooper laughing says, to talk about the good ideas maybe. Park and Ressler are going to talk to Sam’s parents, she asks him how he is doing, meaning his struggles with sobriety, and he says he is weening off.

We see the reporter rush after a woman named Annie on the street and starts asking her questions about Sam. Annie tells her to leave her alone or she will call the police, Annie goes into a building. Maier comes behind the report and stabs a syringe in her neck and says she asks too many questions.

Dembe is in an SUV with Red and Mierce, Red tells him that he knows he showed the letter to Liz. Dembe says it made her happy. Red says it could be the reason why she died.

Maier is with the reporter, Stella and tells her she has twenty minutes to tell him how she knew about the doping story or he is going to inject her again and finish her off.

Red and Dembe arrive to see Boswell and Red asks him when the last time he saw Maier, he says it has been years.

Maier gets his info from Stella, but he doesn’t give her the anectidote, he steps on the vial.

Ressler and Park are at Sam’s house when Walker arrives, his company sponsored Sam – he was their first endorsement. Park shows a photo of Maier, they don’t recognize him. Walker says he knows of him, and anyone in his business stays away from him. Ressler goes to the washroom, he looks in the medicine cabinet and the drugs inside. In the kitchen, his mother says a report was asking a lot of questions, she is a doctor of some sorts, her name is Stella Wong. Park asks for her information, Walker says he will get it for them from his office.

Parker and Ressler get the info and head to Stella’s apartment, they find her on the floor and Park has trouble finding a pulse. Ressler sees prescription forms and goes to put them in his pocket, Park catches him and tells him to put them back.

Later, the task force meets to discuss Stella and Aram says they found a small flash drive in Stella’s intestinal tract – she didn’t give everything up to Maier like he thought.

Park is upset with Ressler, she says she invested time into him, to try to fix him and she is done helping him. And if he doesn’t help himself, she is going to tell Cooper about falsifying the drug test.

Dembe and Aram are interviewing Walker, he believes Sam was doping and Stella Wong had the courage that he didn’t. They want a list of all the athletes his company sponsors, he offers to call the office right away and get the information for them. Once alone, Walker makes the call but also asks if Annie still lives in Philly.

Mierce passes Red an envelope, she says that Tadashi found what he asked for. She tells him not to look, nothing can come from it.

Stella swallowed the hard drive five minutes before she died, on the flash drive are photos of Annie and Maier. Ressler calls Walker and tells him that he needs to get in touch with Annie, they are worried that Maier will target her next. Meanwhile, Anne gets a call like Walker, he says he is there to protect her. She asks if he knows where Maier is and he claims to have not heard from him at all.

Walker arrives at Annie’s apartment, he tells her that Maier got spooked. She is worried that everyone will find out that she was doping and he referred her to Maier. She looks down the floor and notices a doctor’s bag, she asks if he belongs to Maier and he drugs her, knocks her out. Walker did visit Maier earlier and pulled a gun on him, told him that the FBI are asking questions and it is not going to them to him. Back to the present, Park and Ressler are at Annie’s door, they break in and find Annie on the floor unconscious. Park runs out and says she is going after Maier. Walker walks in and acts like he just arrived he tells Aram to go after Maier, he will stay with Annie until help arrives.

Park and Aram are outside, the find each other. Ressler calls, tells them that Walker is playing them, he is working with Maier. Park and Aram run back to Annie’s apartment just before Walker injects her.

Walker is in custody and says he won’t answer any questions without a lawyer. Aram says they found his car, and Maier’s body and all the stuff from Stella, there is evidence that he was juicing 32 athletes. Stella knew everything and now so do they.

Ressler goes to see Park, he tells her going to Liz’s grave only made it harder. He did tear a page off the prescription pad, and he got a bottle of pills, he puts them on the desk. She tells him that he needs help. He tells her to please not give up on him. She takes the pills.

Cooper gives Dembe an envelope, it looks like the one that Mierce gave him from Tadashi. It is of Liz and Dembe in a coffee shop, he betrayed Red within an hour.

Dembe meets with Red in his car, Red tells him that in focusing on the betrayal he missed that Vandyke was waiting for them, his job wasn’t to tell his story. The biggest threat standing twenty feet away, Dembe missed, and now Liz is dead. Red tells him to get out of the car.

Ressler puts some pills on a table, he calls Park and leaves a message and tells her to be at work early in the morning.

Cooper is set up a second time, his friend who was helping find out who framed him, is found dead and the person who did it calls and tells Cooper that he is now responsible for two deaths.