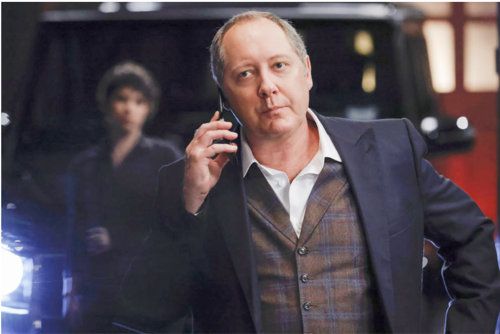 Tonight on NBC their hit drama The Blacklist starring James Spader airs with an all-new time-slow Friday, May 13, 2022, episode and we have your The Blacklist recap below. On tonight’s The Blacklist Season 9, Episode 20 called, “Caelum Bank” as per the NBC synopsis, “In an effort to reveal his true enemy, Red turns to the Task Force to help ground a flying fortress bank.”

Tonight’s episode begins with what seems like a fling bank. Elsewhere, Weecha is recuperating and Mierce is giving red the cold shoulder. Marvin arrives, introduces himself to Mierce, and then sits down. Marvin gives Red a statement of the bank account in question, it was the same one used for the murders of Lacroix and Reggie Cole, it is a numbered account. Red still holds several accounts on that plane. Someone has access to those accounts and used the money for the murders. Red says they have to start on the plane.

Red goes to see Dembe regarding Caelum bank because they have both had experience with them.

Dembe goes to the task force and tells them about the bank on the plane owned by Harris Gramercy. It operates like a ghost plane. No one can hack their way inside there. Red tells Dembe that he needs to find out from Harris who had access to that account. Dembe says they can’t force Harris to give them the information. Red says they need to get him on the ground, he will be more reasonable. Red has a plan, but it is not a popular one.

Aram tells Park he has news, he heard from Main Justice, they processed her review and they are revoking her field status due to medical liabilities, he can’t let her work on this case.

Red meets with Harris, he says he needs a favor. He has every account on the plane locked up. He wants the name of the last person who withdrew money from his account. Aram pulls rank at the control tower of an airport and gets them to ground the plane that Red is in. Once landed, Ressler comes in with a team and acts like he doesn’t know Red, but recognizes him. He arrests Red and Harris.

Cooper surprises Val when he is on the way to prison, he killed Michelle Lacroix, he was supposed to go to the house and burn it to the ground.

Red and Harris are in jail, Red says he can get them out of there, and the Governor owes him a favor. Red says he just needs one name and he can get him airborne in an hour. Harris thinks the whole arrest was a scam. Red pulls out a gun and Harris tells him to go to hell so Red shoots him. Harris gives in, he says he keeps a log. Red give him his phone, and he makes the call to get the name of the person who accessed the account. The name is Hedwig Hawkins. Red is in shock and says it can’t be Heddie. Red leaves and Weecha pulls up to get him. He can’t believe she followed him there in her condition.

Dembe calls an ambulance, Ressler checks Harris and says the blood is dark, he thinks it hit his liver.

Park tells Cooper that she has been demoted to a desk role because of the headaches and she is frustrated. He says he knows how she feels, they just need to keep working.

Ressler tells Dembe that Red is going to kill Heddie. Dembe says she has a condo in Florida.

Deme keeps trying to call Heddie and there is no answer, she has music playing. Red and Weecha walk into her place but she is not there, she was tipped off. Dembe and Ressler pick up Heddie and she says she did nothing to hurt Liz. Red calls Dembe, he knows he has her.

Lacroix had a movie collection and Park finds one with a CD, Aram puts it in the computer and finds two names, Lawrence Knell and Angela Sherwood, they are both lawyers at the same law firm. Dembe and Aram go to talk to them.

Harris died of the gunshot wound, and Red has Heddie with him.

The two lawyers tell Cooper they want statutory immunity and they will tell him what they know. They give him the name of Claudius, the mastermind.

Heddie tells Red that she is innocent and doesn’t understand what is going on. Red tells her to shut up.

Cooper calls Red, he is furious, he almost killed Dembe and Ressler by getting Hedie. And, he doesn’t want him to kill Heddie. Park shows up at where Red is, she wants to work with him, and she tells him that the FBI doesn’t want her anymore. He says he can’t help her. Weecha tells Red that Heddie is waking up. Meanwhile, Aram says they have to go through LaCroix’s things again, if Park found something, there may be more things hidden that they missed.

Heddie maintains her innocence. Marvin walks in with Mickey Croft, the arms trader along the border. Mickey says Heddie came to her three years ago, looking for a job, she was tired of Red and showed Mickey how he cooked his books. Mickey leaves the room. Red gets up and kisses Heddie on the forehead and tells Weecha to make it quick, Weecha and Heddie leave the room. Red tells Marvin that they have to deal with his killing Harris. They hear a gunshot as they are leaving.

Park is watching a wedding video from LaCroix’s stuff and right there, Tyson’s best friend gives a toast to the happy couple, it is Marvin. Cooper calls Red and tells him that Marvin and LaCroix were best friends, he needs to be careful. In the plane, Heddie comes out of the cockpit and Red says they are all going to find out why Marvin did what he did, and he hopes it is good, his life depends on it. Everything makes sense to Red, he remembers Marvin giving Liz two pills for a headache, and he killed her right in front of him. Marvin’s phone is ringing, he tells Red it is for him, it is an insurance plan, he has a shooter with Mierce. He is walking off the plane and nobody is going to stop him. Marvin says may the best man win and Red says goodbye to Claudius. Then Weecha has a medical issue and passes out in the chair she is sitting in.