The Bold and the Beautiful Spoilers: Finn Searches For Sibling Despite Steffy’s Warning – Hunts For Sheila’s Child 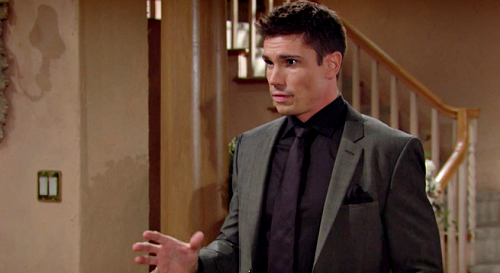 The Bold and the Beautiful (B&B) spoilers tease that John “Finn” Finnegan (Tanner Novlan) will play detective in Sheila Carter’s (Kimberlin Brown) past, so Steffy Forrester (Jacqueline MacInnes Wood) will apparently try to warn her husband off a dangerous sibling hunt.

During the week of December 5-9, Steffy will realize Finn has launched an investigation. It turns out Finn will play detective a bit and leave Steffy unsettled.

Since Finn and Steffy believe Sheila is dead, this may be more about her past.

Finn still doesn’t know much about the rest of his biological family, so he may go digging around and hope to find some less unhinged relatives.

However, Finn may not see the harm in at least looking into Sheila’s history and any siblings who might want to talk to him.

With Sheila out of the picture forever as far as Finn knows, he may assure Steffy that she’s no threat to them now.

Finn may act like this is really no big deal, but alarm bells will still be going off in Steffy’s head.

There’s also Diana Carter, who would offer the best blank slate and might set the stage for the most drama if Finn contacts her.

Diana was supposedly the daughter of Sheila and Massimo Marone (Joseph Mascolo), so that would make her Ridge Forrester’s (Thorsten Kaye) biological sibling in addition to Finn’s.

Finn has admitted he would’ve liked a little sister, so Diana would be a great character to bring on canvas.

Regardless, Steffy won’t approve when she learns Detective Finn is hard at work looking up info.

This will leave Steffy worried about what Finn might uncover and the trouble it could lead to.

The Bold and the Beautiful spoilers say Finn’s investigation will launch a new storyline, so stay tuned!

CDL’s the place to be for fantastic Bold and the Beautiful spoilers, updates and news, so make us your one-stop B&B source.